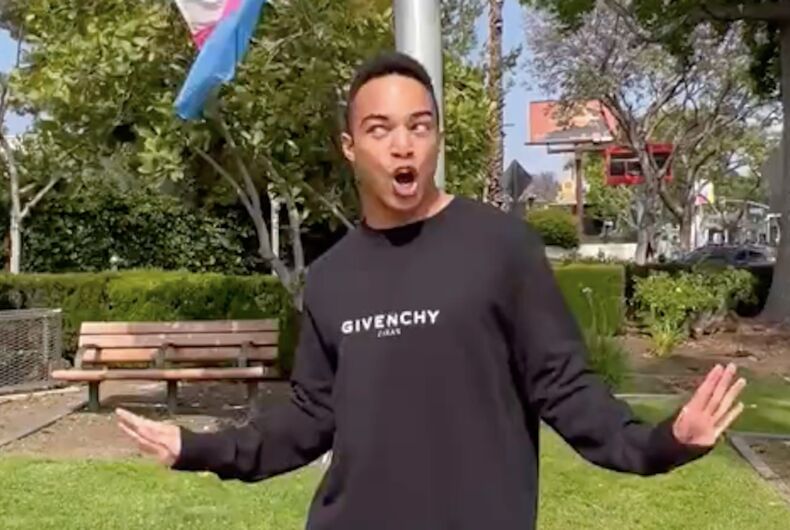 The gay 23-year-old social media celebrity, who has made a career out of attacking the LGBTQ+ community, turned on his father in October as abortion allegations mounted against the one-time football running back.

Moments after the election was called, Christian let loose a barrage of tweets against his dad, Donald Trump, and the far-right movement that once embraced him as a gay darling.

“The Truth,” posted the self-described free-speech radical. “Trump called my dad for months DEMANDING that he run. Everyone with a brain begged him: ‘PLEASE DON’T DO THIS. This is too dirty, you have an insane past… PLEASE DONT DO THIS.'”

“We got the middle finger. He ran.”

The internet-famous, one-time Trump supporter tore into his chosen political family as well: “Republicans, we say we don’t play ‘identity politics’ and then you ran this man mainly because he was the same skin color as his opponent with no background other than football. A boring old Republican could have won.”

Republicans, we say we don’t play “identity politics” and then you ran this man mainly because he was the same skin color as his opponent with no background other than football. A boring old Republican could have won.

Yet another attack tweeted straight at his dad: “Don’t beat women, hold guns to peoples heads, fund abortions then pretend your pro-life, stalk cheerleaders, leave your multiple minor children alone to chase more fame, lie, lie, lie, say stupid crap, and make a fool of your family.. And then maybe you can win a senate seat.”

He has discussed running away from his father with his mother multiple times in his childhood in the past due to his father’s alleged abusive behavior.

Don’t compare Warnock running over his wife’s foot to my father holding guns and knives to my mothers throat, threatening to kill his therapist, her, and one of his adultresses in a therapy session, and telling my mom and I he was going to beat our asses. Get off my page.

A deluge of allegations from women claiming to have carried Herschel Walker’s children swamped the candidate starting in June. Several claimed they bore the football player’s kids; others say the vocally pro-life candidate paid for abortions.

Christian Walker’s own chase for fame gained traction with his father’s run for Senate. In June, the younger Walker blew up on social with a series of provocative, attention-grabbing video posts denouncing Pride Month.

Wearing skin-tight leggings and a Givenchy sweatshirt, with a Pride flag waving in the background, Walker declared: “Honey bun, why do you need a month to celebrate who you sleep with? Newsflash: Nobody cares. You have all your rights, now shut up!”

In the same string of tweets, Walker claimed he’s not gay, despite being attracted to men.

“You take a Pride Month out to run around the streets with no clothes on and hook up in public,” Walker continued, “and then you want to run around crying, ‘Oh, I’m so oppressed! No one likes me!’ Well, stop pushing it in everybody’s face. No one cares.”

Without irony, Walker added: “But the truth of the matter is you want everyone to care because you need attention.”

Pride month makes no sense. You have all your rights, now SHUT UP. Your sexuality is not an accomplishment.

Leave everyone alone and stop projecting your insecurity. pic.twitter.com/DlhzarvVyk