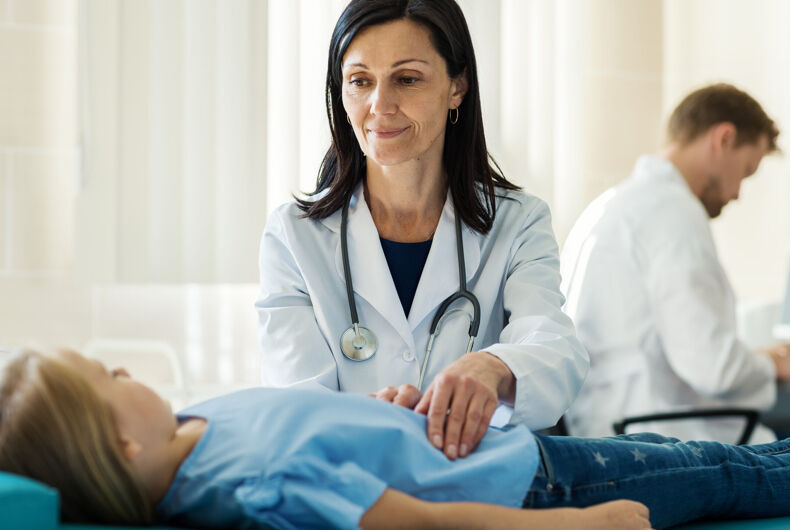 H.B. 151, the “Save Women’s Sports Act,” said that no school or athletic conference “shall permit individuals of the male sex to participate on athletic teams or in athletic competitions designated only for participants of the female sex.”

The bill would’ve overridden the Ohio High School Athletic Association’s (OHSAA) current policies which allow trans athletes to participate if they submit annual bloodwork showing lower levels of testosterone. The OHSAA says only 15 trans girls have joined teams since the policy began in 2015. Only three trans girls have played at the high school level, out of about 400,000 other competing student-athletes.

If an opposing team’s coach, player, or parent questioned any competitor’s sex, the bill would have required the competitor to undergo a medical pelvic exam of their “internal and external reproductive anatomy” — something that can require a doctor to put their hand or an ultrasound wand into a girl’s vagina — as well as an analysis of their genetic makeup and testosterone levels, or all three, in order to confirm the girl’s sex assigned at birth.

Melissa Wervey Arnold, CEO of Ohio’s chapter of the American Academy of Pediatrics, said such examinations aren’t standard practice for pediatric care and can be “psychologically harmful or even traumatic” for young girls. Several doctors told her they’d refuse to conduct such exams.

Democratic state Rep. Beth Liston, a professor of pediatrics at Ohio State University, said such exams would likely not be covered by insurance since such exams are “completely medically unnecessary.” Such pelvic exams and testing can cost up to $1,000, The Columbus Dispatch reported.

The bill underwent a lot of last-minute changes before it failed to receive a second House vote on Thursday morning, marking the end of the state’s legislative session.

The state senate removed the pelvic exam requirement but also introduced and then removed a provision that would have allowed competitors to show a birth certificate to prove their sex assigned at birth. Another provision, requiring public and private colleges and universities to follow the law, was also removed.

Despite these changes, the state’s Gov. Mike DeWine (R) still opposed the bill. He stated, “This issue is best addressed outside of government, through individual sports leagues and athletic associations, including the Ohio High School Athletic Association, who can tailor policies to meet the needs of their member athletes and member institutions.”

The OHSAA also opposed it. In a statement, the group said, “The OHSAA believes that our current transgender policy is effective in protecting the integrity of girls’ sports while also providing participation opportunities for the highly vulnerable group of transgender students.”

While supporters of the bill said it was necessary to prevent trans women from unfairly “stealing” on-field victories and scholarships from cisgender girls, opponents said the bill purely sought to deny sports participation from trans teens who already face higher rates of isolation, stigma, and mental distress. Opponents noted that other policies – like better safeguards against harassment and sexual abuse of female student-athletes – would do more to help women’s sports.

Early into Thursday morning, Ohio senate Republicans tried to combine the bill with S.B. 178, a bill that would have allowed the governor to directly appoint a director of the state department of education, a position that oversees state school policy. The bill would have forbidden public schools from requiring COVID-19 vaccines and blocked teachers from assessing the skills of homeschooled students.

Supporters said the bill would expedite school change while promoting more accountability and transparency. However, the Ohio Federation of Teachers opposed the bill, saying that it would make the state education director position and their policies more partisan.

“This is not the way to do education in the state of Ohio,” Rep. Phil Robinson, (D) said. “Passing something at 1 or 2 in the morning that no one has read, that no one has seen.”