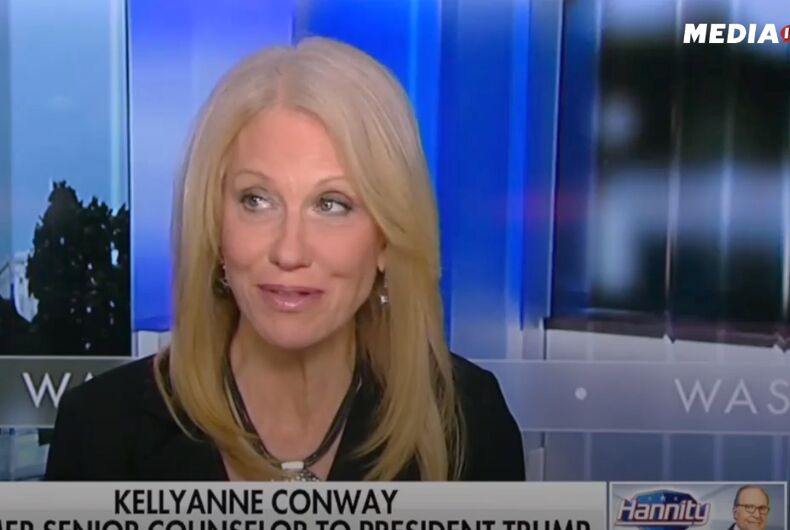 Former Trump advisor Kellyanne Conway defended the recent spate of attacks and threats against drag queens during an appearance on Fox News this week. It’s simply parents defending their children, she insinuated.

Conway, previously considered a moderate on LGBTQ+ issues, joined the recent chorus of rightwing commentators and politicians using drag queens and vile stereotypes to justify legislative efforts to take away transgender people’s civil rights. The religious right has made a concerted effort recently to portray LGBTQ+ people as “groomers” who prepare children for a life of sin and debauchery. These claims have been lifted up by Trump’s MAGA supporters and incorporated into mainstream Republican beliefs in many areas.

On Hannity’s show, Conway started out criticizing the ceremony guest list for the signing of the Respect for Marriage Act. Shangela, among other notable drag performers, was invited to the event. That quickly morphed into a defense of former President Trump’s record on LGBTQ+ rights, but in the end, Conway had circled back around to defend domestic terror threats as defending “our most precious resource.”

“I also want to say, Donald Trump is the first president to come to office already in favor of gay marriage,” Conway pointed out after her guest list critique. “Mrs. Trump, Melania Trump, was honored one year ago at Mar a Lago by the Log Cabin Republicans. I think that somehow the Republicans, the Democrats think they have a monopoly on this.”

“What they have a monopoly on is inviting drag queens to the people’s house as a representation of what their values are. Parents, you have every right to speak up, show up, put up and stand up. Don’t ever give up on that, because our kids are the future. They’re our most precious resource. Nobody can tell you otherwise.”

Once a respected part of the LGBTQ+ movement, the Log Cabin Republicans, like large swathes of the GOP, embraced Donald Trump and everything he stood for. The organization has defended Florida’s “Don’t Say Gay” law by comparing its opponents to pedophiles, opposed landmark LGBTQ+ nondiscrimination legislation, and has repeatedly been rejected by the Republican Party.

The group has targeted Chasten Buttigieg, Transportation Secretary Pete Buttigieg’s husband, in an effort to portray him as an effete gadfly. Chasten Buttigieg is a former elementary school teacher and outspoken critic of the Florida law.

The radicalized organization has also compared LGBTQ+ people to child molesters, saying queer teachers are trying to “groom” and “indoctrinate” young kids. Earlier this week, the group’s San Antonio chapter members joined armed extremists to protest outside a drag show featuring queens from RuPaul’s Drag Race. The organizing group, This Is Texas Freedom Force, has been labeled an “extremist militia group” by the FBI.