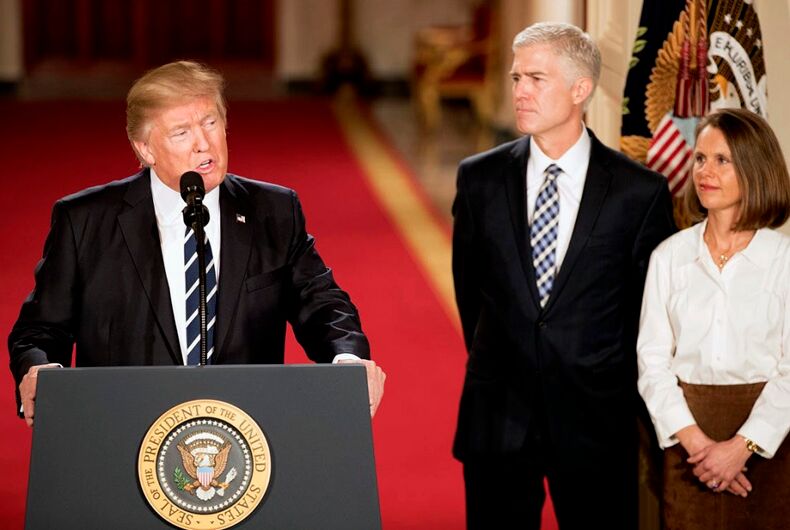 During heated arguments at the Supreme Court yesterday in the case of 303 Creative LLC v. Elenis – about a web designer who doesn’t want to make websites for same-sex couples – Justice Neil Gorsuch appeared angry and even suggested that a Colorado baker had been forced into a “reeducation training program” after he discriminated against a gay couple.

The case is about a web designer named Lori Smith, who says that Colorado’s anti-discrimination law might make her make websites for same-sex couples even though she wants to make them only for opposite-sex couples. Her complaint, which cites the Bible as well as caselaw, says that she “believes that God is calling her to promote and celebrate His design for marriage… between one man and one woman only.”

She is suing over the same law that Colorado baker Jack Phillips of Masterpiece Cakeshop violated several years ago when he refused to sell a cake to a same-sex couple because he believed they would serve it at a wedding, something he said was against his sincerely held religious beliefs.

In that case, Phillips was ordered to “additional remedial measures, including ‘comprehensive staff training on the Public Accommodations section,'” or training about the state’s anti-discrimination law.

Gorsuch called it a “reeducation program,” language likely used to reference internment camps set up by 20th-century dictatorships to silence dissent. States require training on the law in numerous cases, including education about road laws to get a driver’s license or parenting classes in child custody cases, and usually it’s not referred to as a “reeducation program.”

“He went through a process that ensured he was familiar with…” Olson started to answer.

“It was a reeducation program, right?” Gorsuch pressed.

“It was not a ‘reeducation program,'” Olson said.

“What do you call it?” Gorsuch asked.

“It was a process to make sure he was familiar with Colorado law,” Olson said calmly.

“Some might be excused for calling that a ‘reeducation program,’” Gorsuch snapped back.

“Astounding that Gorsuch, a Supreme Court Justice, refers to Colorado giving courses on following civil rights law as ‘reeducation training,'” Adam Cohen of Lawyers for Good Government tweeted. “Like being taught not to discriminate against LGBTQ is the same as being sent to a gulag for protesting communism in the Soviet Union.”

Like being taught not to discriminate against LGBTQ is the same as being sent to a gulag for protesting communism in the Soviet Union https://t.co/YERwAcN6Vn

Others criticized Gorsuch for comparing education about the law to internment camps.

Justice Gorsuch describes education about antidiscrimination law and compliance as a REEDUCATION PROGRAM. This is beyond offensive. It was a central and SOFT tool of many civil rights movements and was essential to targeting market discrimination

Barrett was openly hostile to the Colorado Solicitor General

It does not bode well for the future of civil rights law that Gorsuch believes a state imposes "reeducation training" on employers when it reminds them how to comply with nondiscrimination rules.

Gorsuch thinks it's "reeducation" to make sure someone who has violated a law understands the law they have violated.

He would only think that if he disagrees with the law, which protects LGBTQ people from discrimination. #303Creative

Does Gorsuch believe that the annual sex harassment trainings that corporations are required by law to provide count as "reeducation training"? Or does he agree that they are simply efforts to help people understand and comply with the law?

Ukraine’s only transgender correspondent has become a local legend