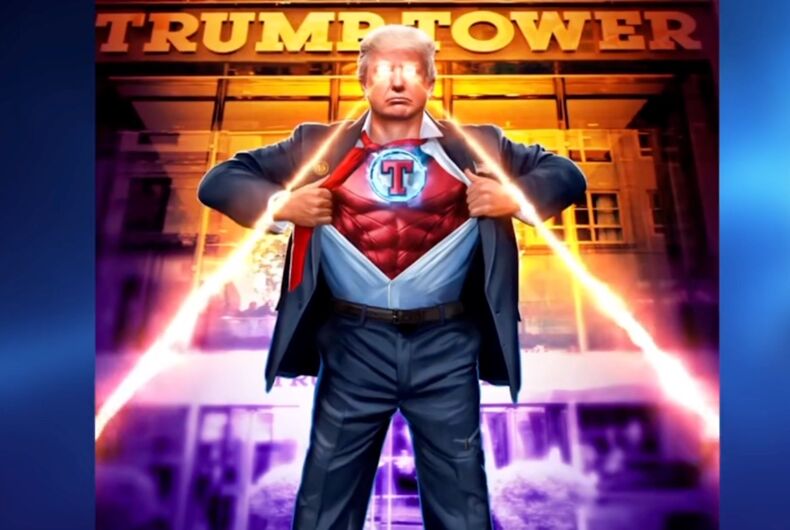 Prominent white supremacist and January 6 rioter Tim Gionet – who goes by “Baked Alaska” online – is realizing that going to prison for trying to overturn the 2020 election results and install Donald Trump in prison was perhaps not the best idea.

“i can’t believe i’m going to jail for an nft salesman,” he wrote on Twitter.

Gionet – who has a tattoo of Trump’s face on his arm – was referring to Trump’s big announcement yesterday that he will be selling “digital trading cards,” or NFTs of ridiculous images of Trump with laser beams for eyes, dressed as a superhero, or riding a red, white, and blue elephant. Trump is selling the digital images for $99 and getting mocked online for it.

Gionet live-streamed himself inside the Capitol on January 6, 2021, chanting “Patriots are in control” and “1776,” a reference to the American Revolution. Many of the Trump supporters seeking to overturn the U.S. government because the guy they liked didn’t win likened themselves to 18th-century revolutionaries.

In the video, he could be seen telling people to go into the Capitol and to “trust the… plan.” He called a Capitol police officer an “oathbreaker.”

In July 2022, he reached a plea deal with prosecutors in which he pled guilty to one misdemeanor count of parading, demonstrating, or picketing within any of the Capitol Buildings, which carries a sentence of up to six months in prison. He will be sentenced next month.

“America doesn’t need a super hero it needs Jesus,” he wrote in a separate tweet.

“i wanted to make america great again but all i got was this shitty nft,” Gionet also wrote.

i wanted to make america great again but all i got was this shitty nft 😔 pic.twitter.com/kbpmzyvhig

In another tweet, he superimposed images of a Star of David and Israeli flags on one of the Trump trading cards. Over the past year, the extreme right has been accusing Trump of being too beholden to Jewish people, and Gionet himself has said that he supports Kanye West for president in 2024 after the rapper praised Adolf Hitler and Nazis Alex Jones’s Infowars. Gionet supported Trump in 2016 and 2020.

“Ye is the only presidential candidate putting Jesus & The Bible first,” Gionet tweeted this week.

Gionet worked with “ex-gay” extreme right grifter Milo Yiannopoulos during his 2016 “Dangerous Fa***t” tour and reportedly got fired by Yiannopouolos for being too extreme.

Steve Bannon, a former Trump administration advisor, was also unimpressed by Trump’s NFTs, saying “I can’t do this any more.”

“I can’t watch it again,” he said on his Lindell TV show after playing part of Trump’s ad for the trading cards. “Make it stop!”

“He said yesterday there’d be a big announcement. Look, I thought the announcement could be [inaudible] is he gonna announce for speaker [of the House]?… But we got this.”