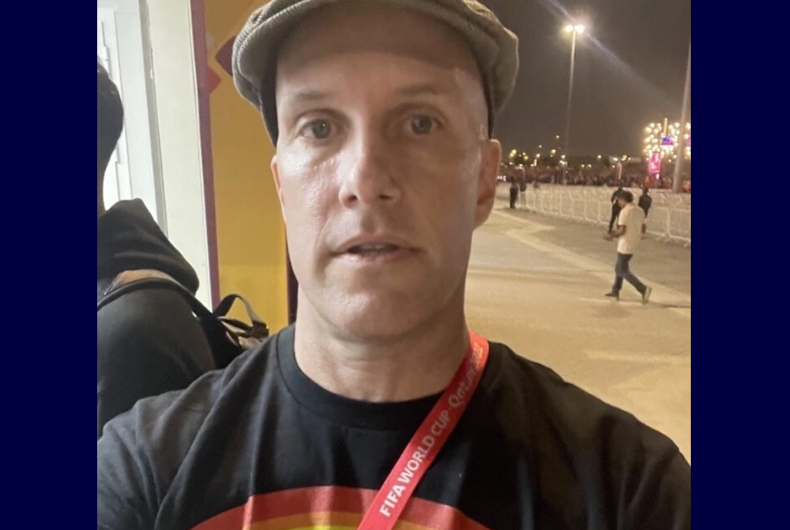 Anti-vaxxers are claiming that Grant Wahl, the LGBTQ+-allied sports journalist who died while covering the World Cup in Qatar, died due to side effects of a COVID-19 vaccine. They’re also using his death to promote an anti-vaccination “documentary” that’s filled with falsehoods about the vaccine and its effects.

An autopsy conducted by the New York City Medical Examiner’s Office revealed that Wahl died suddenly due to an undetected aortic aneurysm. But conspiracy theorists on social media began connecting his death to COVID-19 vaccines.

“Grant Wahl was quacked,” said one Telegram post with over 17,000 views. The slang word “quacked” means to be harmed by an unqualified medical provider. “His wife works for [President Joe] Biden on the Covid Advisory Board…. He ‘died suddenly,’” the post added.

One user on the far-right social network Gab said, “I am sure with this wife, he was boosted to [a] tee.”

A user on the Patriot Voice Telegram channel wrote, “Another #DiedSuddenly” and added hypodermic needle emojis.

The hashtag #DiedSuddenly has been used to connect Wahl’s death to Died Suddenly, a film that claims COVID-19 vaccines cause people to die unexpectedly, The Daily Dot reported.

The Twitter account for the film also highlighted the journalist’s death and mentioned that he had been vaccinated against COVID-19. Their post about Wahl included a screenshot of his April 7, 2021 tweet proclaiming, “Thrilled to get my 1st Pfizer Covid vaccine dose. Science!” The tweet included an image of him holding a sticker that reads, “Vaccinate New York.”

Even though the film Died Suddenly claims to show footage of vaccine recipients who collapsed in public and later died, online fact-checkers have found that some of the film’s videos were recorded before COVID-19 vaccines came out or were of people who didn’t actually die.

Five days before his death, Wahl wrote about feeling “pressure and discomfort” in his upper chest after “three weeks of little sleep, high stress, and lots of work.” Medical clinicians told him it was probably bronchitis and prescribed him antibiotics and “heavy-duty cough syrup.”

Wahl passed out early on December 10 in Qatar’s Lusail Iconic Stadium during Argentina’s quarterfinal match against the Netherlands.

Shortly after learning of Wahl’s death, his gay brother, Eric Wahl, made a tearful Instagram video post suggesting that the Qatari government may have murdered him. He said he believed his brother’s death had something to do with a November 21 incident in which Qatari authorities detained and interrogated Wahl at the stadium for attending a game while wearing a t-shirt with the image of a soccer ball surrounded by a rainbow.

“My name is Eric Wahl. I live in Seattle, Washington. I am Grant Wahl’s brother. I’m gay. I’m the reason he wore the rainbow shirt to the World Cup,” he said in the video. “My brother was healthy. He told me he received death threats. I do not believe my brother just died. I believe he was killed. And I just beg for any help.”

Eric Wahl has since said that he regrets making the video, stating, “I was in shock, and I just had limited information to go on…. I no longer suspect foul play. I’m especially sorry to any people in the Muslim world that I offended. It was never my intention.”

“He’s probably one of the most humble people I ever knew and was a great champion of marginalized people,” Eric Wahl said of his deceased brother.

“Grant died from the rupture of a slowly growing, undetected ascending aortic aneurysm with hemopericardium,” she wrote.

The medical condition refers to an abnormal bulging within the aorta, the large artery that carries blood from the top of heart before curving and branching throughout the chest. Such bulges can weaken the artery, force blood into other tissues surrounding the heart, and rupture — all of which happened in Wahl’s case.

Nearly 10,000 people died from aortic aneurysms or aortic tears in 2019, according to the U.S. Centers for Disease Control and Prevention. People can develop the condition over many years and never show any symptoms, medical experts say.