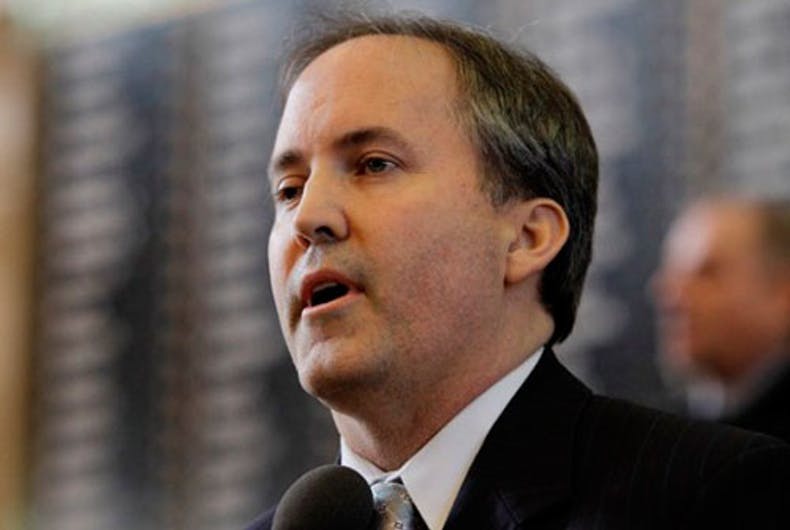 Texas Attorney General Ken Paxton (R) asked the state’s Department of Public Safety (DPS) to give him a list of everyone who had changed the gender marker on their driver’s licenses and other government documents over the last two years, The Washington Post reported.

The DPS found that 16,466 individuals had requested such a change on their various licenses and certificates between June 1, 2020 and June 30, 2022. However, the DPS told Paxton’s office that it couldn’t provide a full and accurate list of those who had submitted a court order requesting a gender change without doing additional research.

“It will be very difficult to determine which records had a valid update without a manual review of all supporting documents,” an assistant manager in DPS’s driver’s license division wrote in a July 22 email to colleagues.

The DPS ended up not providing the list but wouldn’t tell the Post which official from Paxton’s office requested the data. His office requested it a month after the state supreme court ruled that he couldn’t investigate families for “child abuse” for providing gender-affirming healthcare to their trans children.

When the Post requested other emails from Paxton’s office about his request from DPS, Paxton’s office said no such records existed and Assistant Attorney General June Harden said, “Why would the Office of the Attorney General have gathered this information?” and “Why do you believe this is the case?” implying that they were denying that the office had ever asked for the data.

The story is concerning amid Paxton and Gov. Greg Abbott’s (R) larger campaign against trans individuals in the state. Trans advocates worried that Paxton would use the information to further persecute the already vulnerable trans community.

Shelly Skeen, a Dallas-based senior attorney at Lambda Legal, called Paxton’s DPS inquiry “a gross violation of privacy [meant to] target one group of people to fire up their base while transgender people are just trying to live their lives.”

Skeen said that some Texas courts seal or restrict access to gender changes for privacy reasons and to help trans people avoid harassment and violence.

In February, Abbott ordered the Texas Department of Family and Protective Services (DFPS) to investigate for child abuse any parents who allow their trans children to access gender-affirming medical care prescribed by their doctors. Abbott’s order was based on a non-binding opinion issued by the state’s Attorney General Ken Paxton earlier in the month calling gender-affirming health care a form of child abuse.

Paxton’s opinions and Abbott’s order both went against the best practices of pediatrics outlined by the American Academy of Pediatrics, the American Medical Association, and the American Psychological Association. These organizations consider gender-affirming medical care as necessary in many cases, noting it reduces mental anguish and suicide risk among trans youth.

Soon after issuing his order, several DFPS employees quit and some state attorneys refused to enforce it. The Texas Supreme Court ruled that neither Abbott nor Paxton had the authority to issue the order. Several families with trans children also filed a lawsuit against Abbott. The presiding district judge in the lawsuit issued a temporary restraining order, effectively stopping DFPS’s investigations while the court considers the order’s legality.

DFPS employees were told that they had to investigate any trans-related cases, whether they thought there was a reason to or not. Furthermore, DFPS employees were instructed “not to discuss these cases in emails, text messages, or any other form of writing that could provide a record of the investigation or ‘be pulled by media if requested,’” the brief added.

This order essentially directed the DFPS to hide any paper trail of their persecution of trans-supportive families. As a result, the press, other government agencies, and even the families being investigated couldn’t examine the department’s work.

Abbott issued his order without following the requirements for creating new departmental rules, as outlined in the state’s Administrative Procedure Act, 16 DFPS employees wrote in a court amicus brief opposing Paxton’s order. If allowed to go into effect, the order would “irreparably harm morale and effectiveness at DFPS, which are already in crisis,” the brief added.

Advice for straight couples from a long-term gay couple