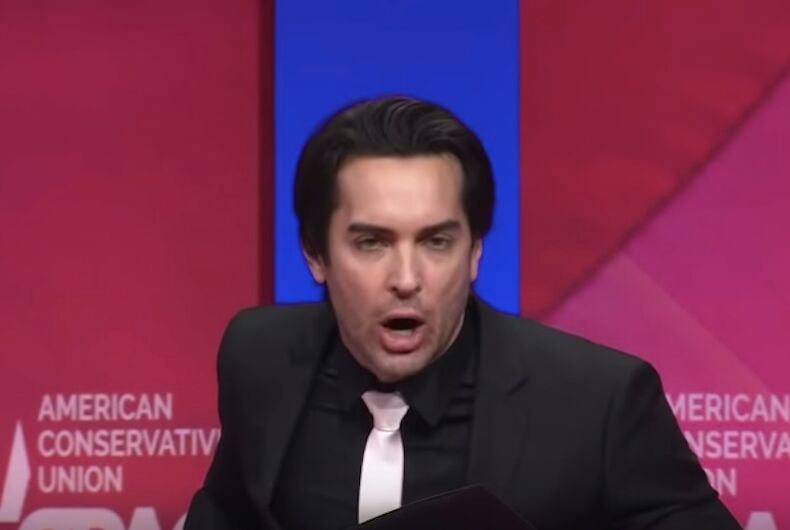 Brandon Straka, a gay pro-Trump influencer who pleaded guilty to disorderly conduct during the events leading to the January 6, 2021, riot at the U.S. Capitol, announced earlier this week that he is suing MSNBC and two of the network’s on-air personalities for defamation.

Straka, who founded the #WalkAway campaign meant to convince LGBTQ+ people to abandon the Democratic Party, was arrested in January 2021. He later admitted to recording video of himself telling rioters approaching the Capitol to “go go go,” as well as telling rioters attempting to wrestle a shield away from a Capitol Police officer to “take it, take it.” He was sentenced to 90 days of home confinement and three years of probation earlier this year.

In a press release issued on December 16, Straka said that he is suing MSNBC as well as journalists Chris Hayes and Ari Melber in what he claims is the “first in a strategic string of lawsuits” against media outlets and individuals “for egregiously malicious and untruthful reporting about the details of his misdemeanor charge related to the 8 minutes Mr. Straka spent outside the Capitol shooting a video to document what was happening.”

Straka claims that Hayes’s statement on All in with Chris Hayes that he broke into the Capitol is false. “Brandon Straka never entered the Capitol on January 6th, and was never accused of or charged with any act of violence, vandalism, theft, or destruction,” the press release asserts.

In January 2022, CNN reported that in addition to his sentence, Straka would have to pay a $5,000 fine and an additional $500 for the damage done to the Capitol building by the January 6 mob.

Straka also refutes Hayes’s on-air claim that he yelled “take the shield, take the shield.” According to the release, “Straka’s Statement of Offense states that his voice can be heard repeating only the words ‘take it, take it.’ Straka was not accused of ‘yelling’ these words. Straka’s defense pointed out that throughout the video Straka is heard repeating the words being said by those around him as he documents the activity for the video’s audience. Straka’s Statement of Offense does not indicate that he gave a directive to encourage any act of violence or assault.”

Additionally, Straka says that Melber’s statement on The Beat with Ari Malber that Straka “was found to have been trying to help attack police officers… He confessed. He confessed to being guilty. He was found to [have been] helping attack police” was “materially false.”

“Straka did not confess and was not found by any Court to have helped attack police officers or to have attempted an attack on any police officer,” the press release reads. “Indeed, the public record… demonstrates beyond cavil that Straka did not engage in any acts of violence or encourage anyone to commit violence on January 6, 2021. Rather, he was filming events outside the east side of the Capitol in a journalistic capacity.”

Straka reportedly avoided jail time by cooperating with federal investigators. After records pertaining to his cooperation in the investigation of “Stop the Steal” organizers were accidentally unsealed earlier this year, a federal judge rebuked Straka for comments he made in the media about his plea agreement.