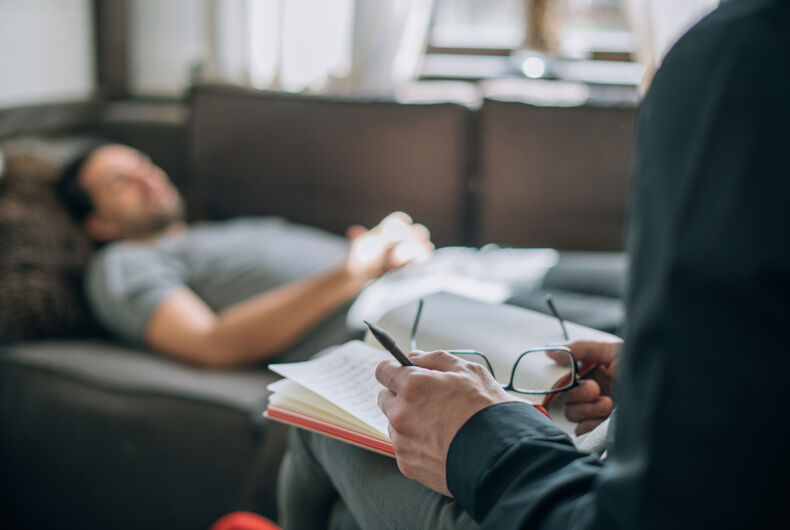 A 22-year-old gay client of the mental health app BetterHelp said that he was told to turn straight to get along with his family by a BetterHelp therapist.

BetterHelp is an online platform that links clients to therapists who provide therapy through text messages and phone calls. The company advertises itself as a solution for people who live in remote areas or can’t afford therapy at market rates.

Caleb Hill of Tennessee said that he turned to BetterHelp when his parent kicked him out for being gay. He said he was connected to a therapist, Jeffrey Lambert, who told him he’d have to choose between being gay or having a relationship with his family, even though Hill wrote on his intake form that he wanted an LGBTQ+ therapist.

“I needed someone to tell me I was gay and that was OK. I got the exact opposite.”

Lambert then allegedly asked Hill if he had been with a man yet. He hadn’t.

“He said, ‘Good,'” Hill recounted. “He said if I did want to go back to my family, I should think hard about being physical with a man, because it would be a lot harder after that.”

Hill said that he worried the therapist would try conducting conversion therapy on him.

“He said if I chose to go back to who I was and deny those feelings, he could get me where I needed to be,” Hill said.

After the session, he wrote the therapist an email explaining why he couldn’t continue therapy.

“I finally opened the door of the prison I built up inside, and the thought of going back kills me,” he wrote in the email. “Will kill me if I lock myself inside again.”

He said that he avoided therapy for a long time after that session because he was worried about finding another similar therapist.

“Given the scale of the service, unfortunate and negative experiences are not completely unavoidable,” the company said in a statement. “This is true in all therapy settings, whether traditional or online.”