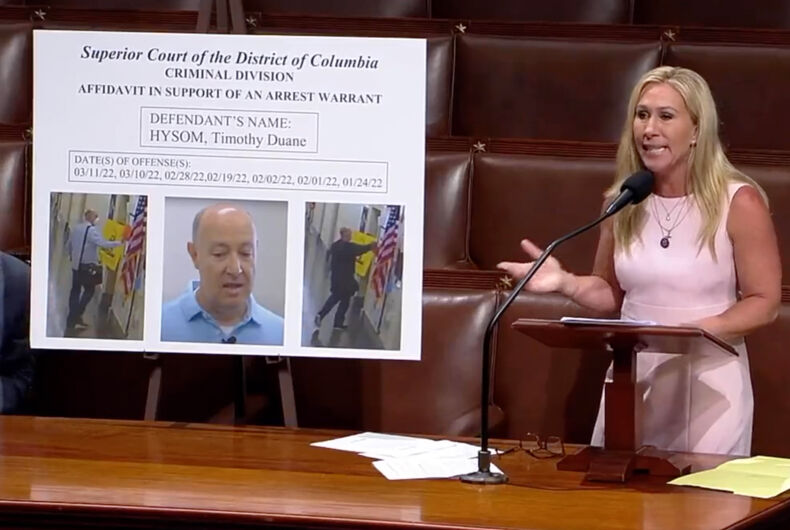 Marjorie Taylor Greene complains that her anti-trans sign isn't respected on the floor of the HousePhoto: Screenshot

The gay congressional staffer who is facing an Ethics Committee investigation for “vandalizing” an anti-transgender sign posted by Rep. Marjorie Taylor Greene (R-GA) is finally speaking out about the controversial congresswoman’s crusade against him.

In an interview with The Washington Blade, Tim Hysom, who has worked behind the scenes on Capitol Hill for over two decades, spoke publicly for the first time about the situation, which began in February 2021 when Greene posted an anti-trans sign in the hallway outside her former office in the Longworth House Office Building.

Greene, who vehemently opposes LGBTQ+ rights, posted the sign on a wall facing the office of Rep. Marie Newman (D-IL). Newman, a sponsor of the Equality Act whose daughter is transgender, had posted a trans pride flag outside her own office. Shortly after that, Greene posted her sign that read: “There are TWO genders: MALE & FEMALE. Trust The Science!’”

Hysom was later identified by Capitol Police as the staffer who repeatedly placed stickers featuring Bible verses on Greene’s sign.

“Nobody that knows me would consider me a rabble-rouser,” Hysom explained. “Walking by those hateful signs every single day just finally got to me. I couldn’t let it go unanswered.”

In June 2022, Greene took to the House floor to rail against the “mistreatment” she claimed she received as a freshman member of Congress and the “crimes” she says were committed against her. She named Hysom in her speech and stood next to a poster displaying his name and photo.

“I felt very unsafe,” Greene said at the time. “I felt my life was in danger.”

Greene says she demanded surveillance cameras be installed to monitor her sign because someone stuck a sticker of Jesus on it saying “I never knew you MTG” pic.twitter.com/Vzo5GkENhQ

She said the Department of Justice had refused to prosecute Hysom. In July, she announced that she had filed a complaint with the House Ethics Committee against Hysom.

Following Greene’s June speech on the House floor, she repeatedly tweeted about Hysom, calling him out by name and accusing him of “stalking,” “insurrection,” and “hate crimes against my faith & gender.” Hysom’s personal and professional email and social media inboxes were subsequently inundated with threats and harassment, and he received a threatening letter at his home address. According to The Blade, many of the messages contained anti-LGBTQ+ slurs.

Hysom, who at the time was Chief of Staff for Rep. Jake Auchincloss (D-MA) and now serves as Deputy Chief of Staff for retiring Rep. Alan Lowenthal (D-CA), is facing a House Ethics Committee investigation. Members of the committee are reportedly deadlocked, with Republicans unlikely to cross Greene and Democrats unlikely to aid her. According to The Blade, the matter could die at the end of the 117th Congress.

“This has nothing to do with his sexual preference or orientation, or the fact that he’s married to a man,” Greene said in a statement, “but it has everything to do with the fact that he attacked me, a Member of Congress, and my First Amendment freedom of speech, my Christian beliefs and values. He also broke the law vandalizing my office’s property multiple times, was caught on camera, and continued to do it. He’s been arrested. Unfortunately, the Department of Justice dropped the charges, but I think they should have pressed charges. It’s outrageous that a chief of staff would continue such illegal behavior, and he should be no longer employed in any office in the federal government.”

Hysom was never arrested or charged with a crime. He also points to a House office building policy which explicitly prohibits “artwork, exhibits and posters” in hallways.

“If she can violate the standing rules of the House and hang offensive and abusive material in the halls of Congress under the guise of free speech,” Hysom asked, “doesn’t the Constitution also protect my right to free speech?”

“Placing a sticker on a sign that isn’t supposed to be there in the first place is hardly a high crime or misdemeanor,” he continued.

Hysom said that while the hateful messages have abated recently, he continues to receive them.

“The reality is that I challenged her hate speech in the halls of the Congress in a way that triggered her and caused her to have a meltdown,” he said. “Her response was to send a like-minded horde of her followers to harass and threaten me… Regrettably, there are likely to be other waves of hate and vitriol, but I won’t be intimidated by her or her hate-filled acolytes.”