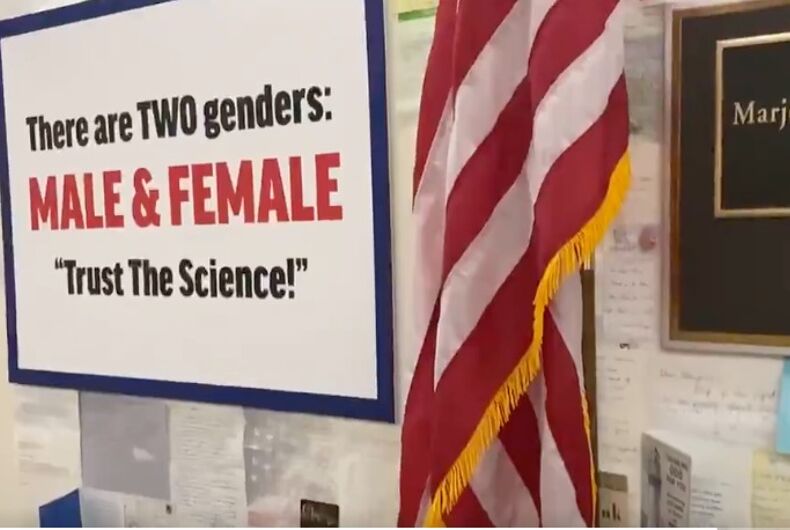 Rep. Marjorie Taylor Greene (R-GA) got her start in politics by demonizing drag queens. The legislator is one of the most vocal Republican opponents of LGBTQ rights and has a particular fixation on transgender people.

One of her stunts included posting a sign outside her office door to attack transgender kids. Now she’s showing it off on social media along with notes and letters from other anti-trans activists and her fans.

The Q-Anon congress member has become the far right laughing stock of Congress and has been removed from her committee assignments. Greene has been widely castigated for her repeated nonsensical claims about the coronavirus and her unapologetic defense of her actions has only caused further disdain for the congresswoman.

When a reporter recently asked about Greene’s ugly interaction with Rep. Marie Newman (D-IL), Greene aggressively defended her decision to insult the Congresswoman and her transgender child. When Newman hung a trans flag outside her door, Greene responded by posting a transphobic sign outside of her office so Newman would have to see it.

At the time of their back-and-forth, complete with tweets and video, Greene was attempting to halt debate on the Equality Act, landmark LGBTQ civil rights legislation  she described as “disgusting, immoral, and evil.”

“Congresswoman Marie Newman called you a deeply broken person and hopes that you would get some help,” the reporter said before asking if Greene had a response.

“I think my colleague, Democrat Marie Newman, that is across the hall for me, should probably get some help herself because she’s the one that attacked me on a video by planting a flag out there in the hallway, but starting on my name plate,” Greene said. “You see, she started that. You do understand that, right?”

“She started by a video on my nameplate, and then it pans to her, where in a militant fashion she plants a flag.”

Newman’s office is direct across from Greene’s. Greene had made several outlandish and patently insulting comments about transgender people shortly before Newman hung the trans flag outside of her office door.

“We don’t need biological men taking over and conquering women like they are trying to do in sports, and then our bathrooms and rape crisis centers, and pregnancy and having babies. Now, biological men do not do not get pregnant and they do not have babies and they are not birthing people. Mothers give birth, and mothers are biological women.”

“That’s science,” she concluded. “And that’s perhaps something that Marie Newman should explain.”

Now Greene is trying to rub it in. She posted a video of the hallway outside of her office decorated like a high school locker with notes and post-its and certificates plastered to the wall.

“I am so grateful for all the beautiful letters I receive every day from great people all over America!” she tweeted with the video. “It’s the nicest welcome back to my office in DC seeing some of them right at the front door.”

But since Greene is notorious for lying to constituents and the press, Twitter was unimpressed.

Dawn Pietsch replied back, “You wrote them yourself.”

“Everybody gets those letters,” another user replied. “But they don’t plaster them on the walls like kindergarten artwork in a desperate attempt to fill the bottomless void that devoured their soul and left them sad and angry all the time.”

“Now pack your books, the school bus is almost here!”

You wrote them yourself lol pic.twitter.com/qnS0Txd2jR

How unprofessional.
Is this Kindergarten?

Thought we’d put up ours so she can look at it every time she opens her door 😉🇺🇸 https://t.co/7joKpTh6Dc pic.twitter.com/aBGRSiIF6X