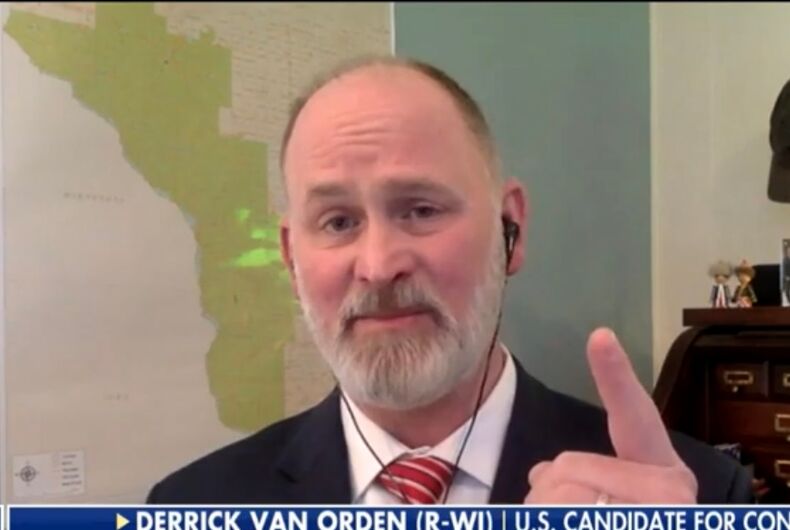 Derrick Van Orden, a man running for Congress and endorsed by Donald Trump is being accused of threatening and harassing staff at a library when he saw a Pride display in a Prairie Du Chien, Wisconsin library. One worker claims that the candidate found the display so “disgusting” that he checked out every single book on the display, except for one that someone already had with them.

Van Orden claims to “support equal rights” and denies much of the reported allegations, although he admits he “complained,” but only about one featured book that he claims has “historical inaccuracies” that alluded to the fact that the Republican Party has long opposed LGBTQ rights.

Related: Man calls trans teens “f****ts” & accuses them of having sex in public before beating them

Van Orden is a candidate to represent Wisconsin’s 3rd Congressional District and his campaign is based in Prairie Du Chien. He ran in 2020 but lost to incumbent Rep. Ronald Kind (D-WI). Van Orden refiled for 2022, and last month Kind announced that he won’t seek a 14th term.

Van Orden was present at, but denies involvement in, the storming of the U.S.Capitol on January 6, where a pro-Trump mob attempted to prevent certification of the Presidential election. An analysis found that he bankrolled the trip with leftover cash from his 2020 campaign.

The La Crosse Tribune reports that the incident happened on June 17 at the Prairie du Chien Memorial Library. The Pride display is a regularly occurring display with “included colorful posters and a mix of both fiction and non-fiction books,” according to the paper, but only this year did people begin to take issue with it and send negative messages to the library about it.

Kerrigan Trautsch, a page who was 17 at the time and now 18, talked extensively about what happened. Trautsch, who is out, put up the display and was one of the staff members who initially encountered Van Orden.

“It was chaos,” she said. Van Orden initially confronted one co-worker at the library when “his voice starting to raise,” and Trautsch came out to help. “So I walked out there to one of my coworkers and I started to realize that this is not a good situation.”

Trautsch said that Van Orden told her that he found the display “disgusting” and the information for multiple books was “incorrect,” although some were fiction.

The one book that upset the candidate the most is A Day in the Life of Marlon Bundo, which is a parody book alluding to former Vice President Mike Pence’s anti-LGBTQ views and past actions. It tells a fictionalized recount of a fictionalized pet rabbit based on Pence’s daughter’s book about her pet bunny.

Van Orden demanded that the “historically inaccurate” book be removed.

“His voice was loud, he was aggressive, he had his finger jabbing into [the book] constantly,” Trautsch said, bordering on “threatening” and making her “very uncomfortable.”

He “demanded” to know who put up the display, but Trautsch did not feel safe telling him because “he was full on shouting at this point and he kept aggressively shoving the books around.”

Van Orden filed a statement of concern with the library, calling the book “a clear attempt to paint Republicans as being not inclusive,” because it suggested “that same-sex marriage was illegal in the U.S. when the story was written,” which was in 2018. It’s not clear if Van Orden was aware the book’s story was not meant to be taken literally or actual events.

Then, he got a library card, took every single book off the display, and checked it out. Only one book that a patron in the library had in their possession at the time was left behind. That left the display completely empty.

“We were very fearful that they would not return, that they would be damaged when they got back,” Trautsch said, but the books were returned a week later, apparently unharmed.

“When I got home I told my parents: ‘I don’t feel safe at work anymore,’” Trautsch said. She did not know Van Orden prior and did not learn he was a political candidate until later.

The issue caused several anti-LGBTQ advocates to come to the library’s board meeting and complain about the “LBGTQ (sic) agenda” and denounce books acknowledging queerness.

“This just means that he as a politician has to do a lot more learning,” Trautsch said. “Not maybe so much about the laws that follow the LGBTQ community, but the actual people that may or may not be voting for him… I want him to know: I can vote now.”

In a statement, Van Orden claims he supports “all Americans” and challenged the library staff’s recollection of events.

“I unequivocally support equal rights for all Americans. This of course includes our fellow citizens who are members of the LGBTQ+ community,” he said. “It is 2021 and this should not have to be stated but there are people who continue to divide us as Americans for political purposes. I will not allow them to further degrade the relationships we have as citizens.”

Meet Derrick Van Orden, who was on the Capitol grounds during the 1/6 insurrection and then lied about it, and who apparently 😡😤🤬a librarian because of 🏳️‍🌈, and who is the GOP’s pick for Wisconsin’s 3rd congressional district https://t.co/8RKS1RFgcR

So, @derrickvanorden was so threatened by a Pride Month display in the children's section of a library that he screamed at the staff about "teaching them a lesson" and then checked out all of the books except for one, essentially dismantling the display. https://t.co/cx2ZQtaLHe

Derrick Van Orden would be a disaster for #WI03. https://t.co/Y9aGvTQYKW

Marjorie Taylor Greene shows off the anti-trans sign hanging in her office hallway. She added flair.