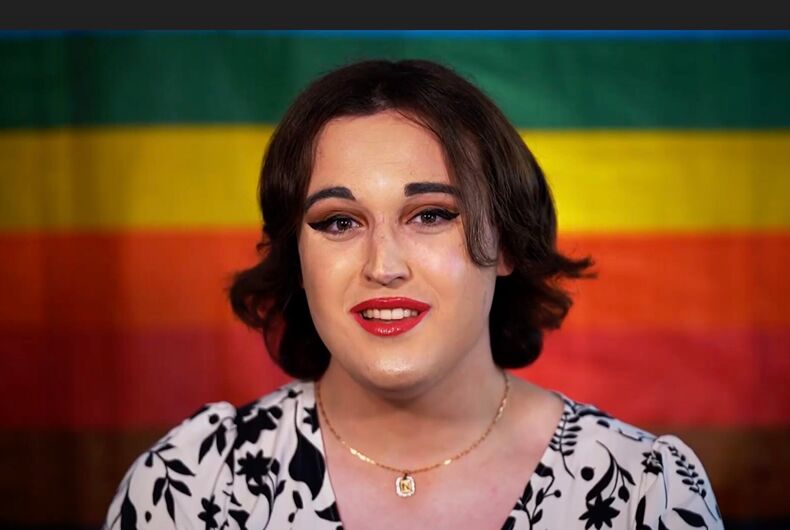 Despite the struggles the LGBTQ+ community faces, beautiful things happen daily. People fall in love, communities fight for acceptance, families support their loved ones, and so much more.

Throughout the year, LGBTQ Nation made sure to celebrate these moments. Here are five of our favorites.

When this grandpa showed support for his trans grandson A tear-jerking TikTok shows the grandfather of trans college student Cazorla Fernández’s removing an old photo of Fernández and replacing it with an updated snap, then adding the frame to his collection of family photos.

“I smiled like an idiot,” Fernández said when his grandfather asked the newly transitioned college student for the pic to replace his likeness.

“I posted this one specifically because a lot of trans youth are scared about what their family members will think or do when they come out,” he explained to Newsweek. “I was certainly worried about that too. I posted the video to show that it isn’t a generational issue — that being old isn’t an excuse to be unsupportive of family you are supposed to love.”

In June, a 10-year-old girl worked to ensure LGBTQ+ books were available in her Louisiana town.

“I think there should be all kinds of books in the library,” she told The Acadiana Advocate. “There are a lot of people that are LGBTQ. I think people would like to see books they’re like, too.”

Newton was inspired to create her Little Queer Library, which she painted with the LGBTQ+ Pride flag, after attending a Lafayette Public Library Board of Control meeting with her mother, during which the board discussed banning certain books.

“I hope that if the library sees this there will really be no point in banning LGBTQ books and so they won’t actually do it,” she said.

When a flight attendant proposed to a pilot in flight

Moncayo explained over the PA system that the two met aboard an Alaska Airlines flight to San Francisco in 2020 while Rojas was working for the airline as a flight attendant. In response to this information, passengers cheered and applauded as two nearby flight attendants flapped their rainbow-colored fans in approval.

After getting on one knee and stating Moncayo’s full name, she said, “My goddess. With you, I’ll go to the skies. Would you do me the honor of being my wife?” She then pulled a small ring box out of the side of her dress and opened it, presenting a ring to Moncayo.

Moncayo then kissed Rojas, and Rojas put the ring onto her partner’s finger as the passengers cheered and the flight attendants flapped their fans open and closed.

However, unbeknownst to Rojas, Moncayo had also planned on proposing. As they deplaned the flight and walked towards the gate, Moncayo proposed. Of course, Rojas accepted.

In July, Rep. Matt Gaetz (R-FL) attacked a queer teen activist, mocking her body because she’s pro-choice. The teen took his insult as an opportunity to do some good and raised $1.4 million in funding for an abortion fund.

19-year-old Olivia Julianna wrote on Twitter, “It’s come to my attention that Matt Gaetz — alleged pedophile — has said that it’s always the ‘odious.. 5’2 350 pound” women that ‘nobody wants to impregnate’ who rally for abortion. I’m actually 5’11, 6’4 in heels. I wear them so the small men like you are reminded of your place.”

The rightwing site Newsmax said that Gaetz’s comments were “sure to raise dander of his political opponents,” so Gaetz decided to make a joke about Julianna’s body by sharing her profile picture and writing “dander raised,” implying that he doesn’t care about her opinion because she’s one of the unattractive pro-choice activists he was mocking.

Julianna hit back with a tweet linking to the Gen-Z for Choice Abortion Fund, a fundraiser organized by Gen-Z for Change. This youth-led organization advocates reproductive freedom.

The Colombian besatón, or kiss-a-thon, was organized on social media in response to a shocking viral video showing the couple, Santiago Maldonado and Jorge Esteban Farías, being run out of a park in Colombia’s capital city by an angry neighborhood mob, one frenzied woman wielding a broom handle.

For the besatón, which took place at the same park the couple was mobbed in, organizers used the viral video to promote the event, posting action information over the eye-popping sound and images.

The turnout was huge.

Supporters kissed, danced, and played music while rainbow flags filled the park. Signs read, “Kisses are signs of affection, not a crime,” and “We want to be able to kiss without being monitored.”

One video shows how the frenzied woman wielding a broom handle became a witchy rallying cry as protesters chant, “Bring out your broomsticks, we’re not afraid!”

In October, a local Iowa news station proudly re-introduced one of its reporters after she came out as transgender.

In a 16-minute segment, the station celebrated Nora J.S. Reichardt’s transition and gave her the opportunity to tell her story.

“You have welcomed her into your homes for the past year… Tonight, Local 5’s Nora Reichardt wants you to meet the real Nora, her true self.”

Reichardt spoke about how fortunate she was to have support from her colleagues and how happy she was she didn’t have to hide her identity at work anymore. Mostly, she spoke about how much happier she is being her true self.

Wrestler Anthony Bowens was terrified before coming out. This year he made history.