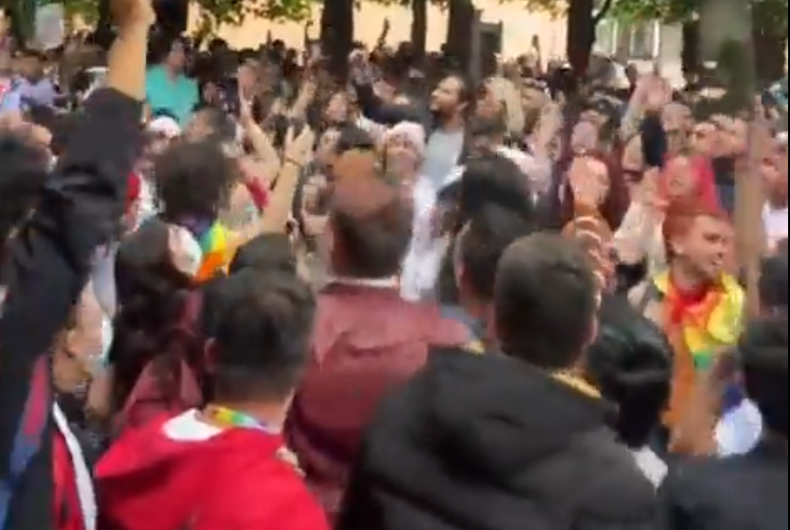 The Colombian besatón, or kiss-a-thon, was organized on social media in response to a shocking viral video showing the couple, Santiago Maldonado and Jorge Esteban Farías, being run out of a park in Colombia’s capital city by an angry neighborhood mob, one frenzied woman wielding a broom handle.

“If you don’t leave, we’ll lynch you!” one woman screams in the video.

“In this neighborhood we don’t allow sex in the park!” yells another. “Especially not in front of children!”

Over the shouting, the young men ask, “What sex?” and repeat they’d only been kissing.

After Maldonado and Farías were chased from the park, located in Bogotá’s Salitre neighborhood, they reported the confrontation to authorities. The official in charge of sexual diversity in Bogotá said the case was being investigated.

Bogotá’s mayor condemned the incident, according to the BBC.

Sunday’s demonstration isn’t the first besatón to overtake the Colombian capital. In 2019, crowds of same-sex couples staged an event outside an upscale shopping mall where a man reportedly pushed a gay couple and screamed profanities when the two were spotted hugging and holding hands. When the couple reported the incident to authorities, they were fined for indecent exposure.

For Sunday’s besatón, which took place at the same park the couple was mobbed in, organizers used the viral video to promote the event, posting action information over the eye-popping sound and images.

Supporters kissed, danced and played music while rainbow flags filled the park. Signs read, “Kisses are signs of affection, not a crime,” and “We want to be able to kiss without being monitored.”

One video shows how the frenzied woman wielding a broom handle became a witchy rallying cry, as protesters chant, “Bring out your broomsticks, we’re not afraid!”

Colombia is one of the most liberal countries in Latin America when it comes to LGBTQ rights. Same-sex marriage was legalized in 2016, and same-sex parents have equal rights to adoption. Anti-LGBTQ discrimination is prohibited by law.

Check out some of the hundreds of posts from Sunday’s besatón.