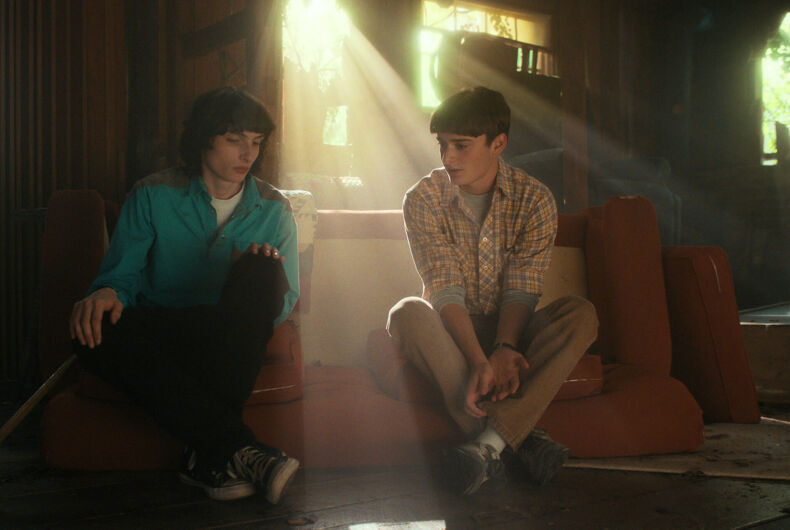 Finn Wolfhard as Mike Wheeler and Noah Schnapp as Will Byers in Netflix's 'Stranger Things'Photo: Courtesy of Netflix

It’s listicle season! This time of year, everyone is counting down their top picks and favorite content of the past 12 months, and that includes Tumblr’s annual rundown of the top fan “ships” of 2022.

For those of you scratching your heads right now, “shipping” is when fans of a particular TV show, film, or media franchise really want two characters to fall in love – to be in a relationship, get it? Usually, these longed-for relationships aren’t cannon, but they lead to memes, fan fiction, and tons of social media posts.

Tumblr is a particular destination for fan shipping – even after the site banned adult content in 2018 – and the site’s year-end list has been dominated by same-sex couples. Last year’s list didn’t include a heterosexual couple until number 23.

This year, the list features imaginary same-sex couples in the top 12 spots – a less impressive showing, but noteworthy nonetheless, proving once again just how badly online fandoms want to see queer relationships in their favorite shows.

A total of three couples from Netflix’s Stranger Things made it into the top five in 2022, with “Byler” (Will Byers and Mike Wheeler) and “Steddie” (Steve Harrington and Eddie Munson) debuting on the list in the top two spots.

“Nandermo” (What We Do in the Shadows’ Nandor the Relentless and Guillermo de la Cruz) also debuted this year at number eight, while “Hannigram” (Hannibal Lecter and Will Graham from NBC’s Hannibal) remains on the list seven years after the show ended.

There are plenty of same-sex couples elsewhere on the list – special shout outs to “Dreamling” (Dream of the Endless and Hob Gadling from Netflix’s The Sandman) at number 20, “Tomgreg” (Tom Wambsgans and Greg Hirsch from HBO’s Succession) at number 23, and the perennial “Stucky” (the Marvel Cinematic Universe’s Steve Rogers and Bucky Barnes) at number 30 – but these are the top 12. Check out the list below and keep the fantasies alive!

Will Byers and Mike Wheeler on Stranger Things

Dean Winchester and Castiel on Supernatural

Blackbeard and Stede Bonnet on Our Flag Means Death

Evan Buckley and Edmundo Diaz on 911

Luz Noceda and Amity Blight on The Owl House

Geralt of Rivia and Jaskier on The Witcher

Caitlyn Kiramman and Vi on Arcane

Hannibal Lecter and Will Graham on Hannibal

Dictionary.com’s word of the year is “woman” after Republicans spent 2022 unable to define it