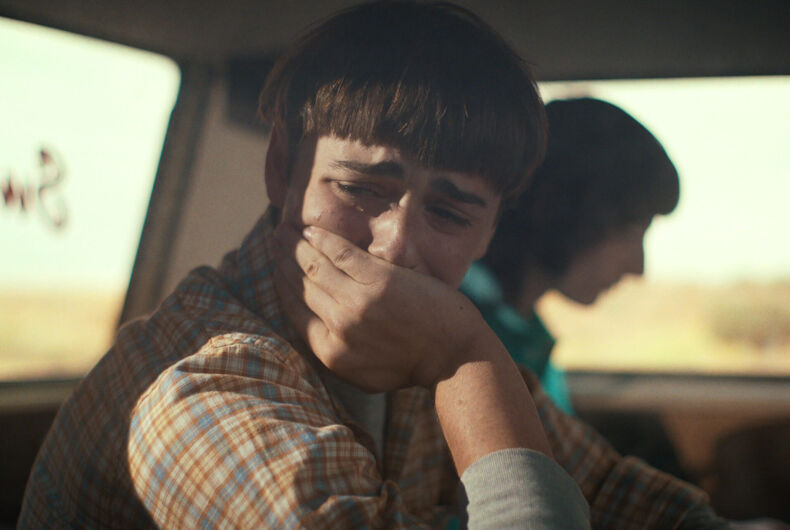 There has been a lot of fan speculation regarding Stranger Things character Will Byers, played by cast member Noah Schnapp, on whether the character is gay or not. When fans found out via an interview Schnapp gave that Will is indeed gay, a lot of viewers were disappointed in the way the show handled his coming out.

Stranger Things is set in the 1980s. Coming out looked a lot different during that decade than it does today. Although the Netflix series is receiving some flack for how it’s handled Will’s character journey, it’s important for viewers to reconsider their notion of what it means to come out and what that representation looks like.

All of this controversy started during a season four episode where Will is riding in the car with his best friend Mike. They’re on their way to rescue Mike’s girlfriend and their best friend, Eleven. During the car ride, Mike feels lost and unsure of himself; he doesn’t believe that he can rescue Eleven. That’s when Will’s big speech comes into focus.

During his speech, Will references a painting he created that shows Mike being victorious. Will champions his best friend in an emotional speech where he essentially reveals his feelings for his best friend without actually coming out. It’s obvious to his brother what Will is saying as he cries out the window, finally feeling the effects of his emotions.

Since the episode premiered, fans have speculated whether or not Will is gay because of the speech he gave. Up until that point, Schnapp had stated in interviews that the character’s sexuality could be left up to audience interpretation. It wasn’t until the season four finale that Schnapp could speak freely about his character’s identity.

In an interview with Variety, Schnapp was quoted as saying that Will is indeed gay.

“Now it’s 100% clear that he is gay and he does love Mike,” Schnapp said. “It was a slow arc. I think it is done so beautifully because it’s so easy to make a character just like all of a sudden be gay.”

One would guess that fans would be excited to learn the truth about one of their favorite characters, but that wasn’t the case.

Soon after Schnapp’s interview, the show was accused of queerbaiting audiences into believing the character is gay without explicitly stating it. Queerbaiting is a tool used by marketing teams in television and film that hint at a character’s sexuality without making it clear how the character identifies. Writers and users on Twitter expressed their ire over the show’s representation of an LGBTQ character.

Many viewers felt that Will should have explicitly stated that he was gay to his friends. Fans wanted it to be clear exactly who Will is in the show versus an actor stating a character is gay in an interview. However, there are a few reasons why the show handles Will’s sexuality in a realistic way.

It’s entirely possible that Will won’t come out by the end of the series (Stranger Things’ next season is its final season). The show is set in the 1980s, a time when being gay was stigmatized by the AIDS epidemic and rampant homophobia had existed for decades.

Queerness clearly exists in this fictional world — the character Robin came out to her best friend Steve in a season three episode. But what hasn’t been shown is homophobia and the backlash a gay character could face for coming out. A teenager like Will who is still trying to figure out his identity is not going to explicitly come out until he truly feels safe in an environment he can be himself. It turns out that older fans appreciate the way Will’s story is playing out.

“I was just in Paris and this, like, 40-year-old man came up to me and he was like, ‘Wow, this Will character made me feel so good. And I related to it so much. That is exactly who I was when I was a kid.’ That just made me so happy to hear,” Schnapp said in the same Variety interview.

It makes sense that older viewers would relate to Will and his coming out journey. It was a lot more relatable for older fans than had Will explicitly come out to his brother and friends.

Coming out in the 1980s was not something that happened often or lightly, especially in rural Indiana, where the series takes place. People were abused for being gay and disowned back in the 1980s. LGBTQ individuals at the time would only come out to their closest friends in environments where they could control how their news was received. This meant people were coming out later in life, not in their adolescence.

It’s idealistic to expect Will to come out to his friends based on our modern perceptions of what coming out is supposed to look like. Nowadays coming out as gay is seen as more commonplace. This wasn’t the case in the 1980s. It makes sense to provide a more realistic storyline involving queerness than to provide inspiration for younger fans. It’s inspiring in its own way as an exploration of what queerness looked like decades ago. People soon forget the troubles people went through just to be themselves.

Not only that, but LGBTQ people still have a lot of trouble coming out today. There are still places in our country where children are disowned for being gay or transgender. It can still be a major minefield for people coming out today who may lose their homes and families without any resources for their own protection. Even today, an explicit coming out speech isn’t always the most realistic storyline choice.

Fans may still be conflicted on whether Will’s sexuality has provided enough fan service to its LGBTQ viewers. Hopefully, these fans can understand the pressures people faced decades ago and still find beauty in a character who provides representation for so many others in its audience.

Nightclub kicked out gay patrons for looking “too homosexual.” The backlash was swift.