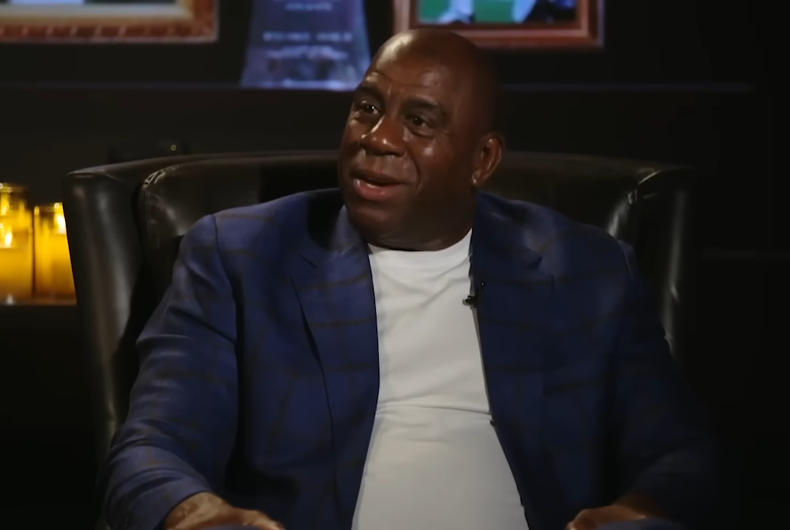 Magic Johnson has had plenty of challenges in his life, but having a gay child wasn’t one of them. His son, EJ, came out publicly in 2013. Johnson told reporters at the time, “I’ve known for a long time” that his son was gay.

But in a recent interview with the podcast Club Shay Shay, Johnson elaborated. And despite some old-fashioned language, the sentiment shines through.

“In the beginning, I was like any other dad. ‘Oh, I’m gonna get him in sports,’ right?” he told host Shannon Sharpe. “And so when we start, first soccer, and then football, he like [disagrees with the head], and then you know, I saw early on, he’s playing with dolls, he likes to play dress-up, but then if I come in, he would hide all that. But I saw it. I think, as he got older and older, you start seeing it, but he never said anything. So I think he was trynna keep it from me, and then finally, he felt strong enough that he could finally tell me.”

“And so, he made me change. It wasn’t he who had to adjust, I had to adjust. And I finally told him. I said, ‘let me tell you something, you’re my son. I love you. I don’t care, if you want to be a gay man, I’m supporting that. I’m supporting you.’ And when he finally announced it to the world, I saw all the letters that came in around the world, that he affected all these other young people who wanted to come out to their parents and gave them the strength to do it. So, now we’re like best of friends. And I tell him all the time, ‘I’m so proud of you. Live your life just like I’m living my life. Love who you want to love. Dad is going to support you all the way.’ So it was really beautiful and he cried, he needed to hear that, because some of his friends didn’t get that support.

“We all gotta love our children no matter what they decide to… And support them because they need that. They need to know that you love them, that you support whatever decision they make, or whoever they decide to love or like, you gotta support that. And that’s what I’ve been able to do…”

This isn’t the first time Johnson has had the conversation in public.

“When my son came out,” the NBA legend told Ellen DeGeneres in 2017, “I was so happy for him and happy for us as parents. We love him. EJ is amazing. So you got to support your child, because there are so many people who try to discriminate against them, so they need you to support them. Because if you don’t support them, who is going to support them? And love them?”