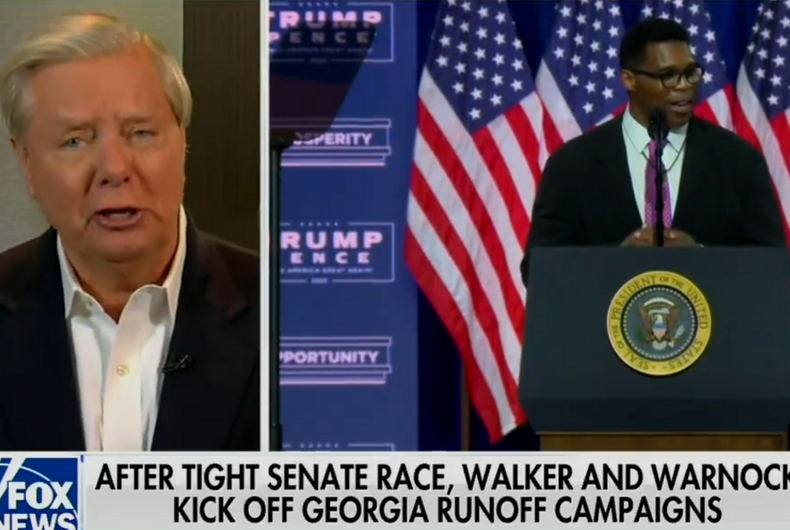 Sen. Lindsey Graham (R-SC) openly wept for Georgia GOP Senate candidate Herschel Walker and “the conservative movement for people of color” on Fox News last night, saying that the women claiming to have had children by Walker and abortions paid for by Walker are part of a liberal conspiracy to make it impossible for people of color to be conservative.

Neither Walker nor his opponent, incumbent Sen. Rev. Raphael Warnock (D-GA), got over 50% of the vote in Tuesday’s midterm election, which under Georgia law requires them to compete in a runoff election. One of the third-party candidates who prevented them from getting to the 50% mark was out gay Libertarian Chase Oliver.

Over the past several months, more and more women have come forward saying that they have either had children by Walker, who is a former NFL player with no background in politics, have had abortions that Walker paid for, or have been pressured to get an abortion by Walker.

Evangelical Christians and the Republican Party establishment have stuck by Walker as he denied all the accusations – even though one of the women literally kept the receipts for the abortion itself and a $700 check Walker sent her to cover it – arguing that they’re all just dirty Democratic tricks designed to get Warnock elected.

And Graham has been Walker’s most vocal defender. Last night he begged people to send Walker money so that he can win his Senate runoff election and possibly tip the balance of the Senate in favor of Republicans.

“If Herschel wins, he’s gonna inspire people all over Georgia of color to become Republicans,” Graham said, in tears. “Herschel Walker is a nightmare for liberals. He’s an African American conservative. They have belittled him. They have treated him like crap, his family.”

“Stand by Herschel tonight. If you can give, give.”

“The conservative movement for people of color is on the ballot in Georgia. We must help people like Herschel.”

Lindsey Graham, eventually working himself up nearly to tears, claims, "they're trying to destroy Herschel to deter men and women of color from being Republicans" pic.twitter.com/feNlNIQpzk

A panel on CNN discussed Graham’s emotional defense of Walker.

“Oh my gosh, I thought he was going to start crying!”

Walker’s family hasn’t all stood by him. His adult son, out gay (although he objects to that word) Christian conservative influencer Christian Walker denounced his father and opened up about the times his father tried to kill him and his mother earlier this year.

“I know my mom and I would really appreciate if my father Herschel Walker stopped lying and making a mockery of us,” Christian Walker wrote in October. “You’re not a ‘family man’ when you left us to bang a bunch of women, threatened to kill us, and had us move over 6 times in 6 months running from your violence.”

“Every family member of Herschel Walker asked him not to run for office, because we all knew (some of) his past. Every single one. He decided to give us the middle finger and air out all of his dirty laundry in public, while simultaneously lying about it. I’m done.”

I don’t care about someone who has a bad past and takes accountability. But how DARE YOU LIE and act as though you’re some “moral, Christian, upright man.” You’ve lived a life of DESTROYING other peoples lives. How dare you.

Every family member of Herschel Walker asked him not to run for office, because we all knew (some of) his past. Every single one. He decided to give us the middle finger and air out all of his dirty laundry in public, while simultaneously lying about it.

With 99% of precincts reporting, Democrat Warnock has 49.4% of the vote in the Georgia Senate race, Republican Walker has 48.5%, and Libertarian Oliver has 2.1%.

We may not know if Lauren Boebert lost until December