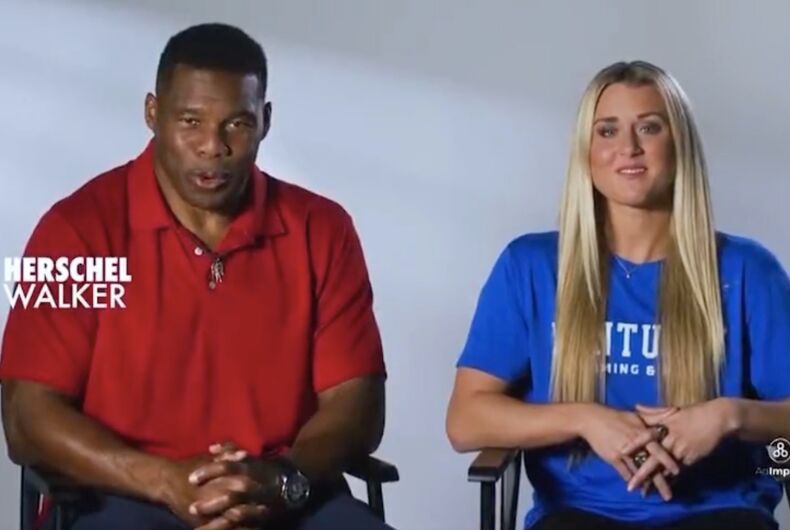 The video featured Riley Gaines, a self-described 12-time NCAA All-American swimmer. In March, Gaines tied for fifth place with trans swimmer Lia Thomas. Gaines has been complaining about it ever since.

In Walker’s ad, Gaines says, “For more than a decade, I worked so hard. Four a.m. practices to be the best. But my senior year, I was forced to compete against a biological male.”

Both are peddling a right-wing narrative that trans women are a threat to women’s sports, locker rooms, and other female “safe spaces.” This narrative has been used to push trans youth sports bans across the nation, even in states where no trans athletes are competing in school sports.

Gaines continues, “A man won a swimming title that belonged to a woman, and Senator Warnock voted to let it happen.”

Looking into the camera, Gaines says, “Herschel Walker stands up for what’s right.”

Walker then smiles at the camera and says, “I’m Herschel Walker and I’m proud to approve this message.”

Herschel Walker is up with a new runoff ad about transgender athletes, featuring a swimmer who tied with Lia Thomas.

“My senior year, I was forced to compete against a biological male,” Riley Gaines says in the ad for Walker’s Senate campaign. pic.twitter.com/MlVxnJwkgB

In the ad, Gaines doesn’t mention that she and Thomas were both actually beaten by cisgender female athletes, or that the number of trans athletes in collegiate sports is actually very small. She also doesn’t mention that women’s sports are actually threatened by huge funding disparities, rampant sexual abuse, and media neglect, rather than by trans people.

Walker’s ad was released just after Sunday’s Transgender Day of Remembrance, an annual commemoration of trans people who lost their lives to violence and otherwise. This year, at least 32 trans people have died from violence – most have been Black women.

In response to Walker’s ad, Nadine Bridges, executive director of One Colorado, the state’s LGBTQ advocacy organization, wrote, “Shame on Herschel Walker — and shame on every politician using LGBTQ lives as political props.”

“There’s an undeniable nexus between this kind of baseless and hateful rhetoric and the violence leveled against our community this weekend in Colorado Springs and the violence being perpetrated against marginalized communities all across this country,” Bridges added.

Sarah Kate Ellis, president and chief executive of the LGBTQ media watchdog group GLAAD, wrote, “Airing this kind of rubbish under the guise of a political campaign was already deplorable enough—but in the wake of Saturday night’s massacre at Club Q, it’s simply unconscionable.”

“These ads should be pulled immediately from Georgia’s airwaves before more lives are put in danger,” Ellis added.

In April, Gaines went onto the Fox News program of white supremacist and anti-LGBTQ bigot Tucker Carlson to talk about her discomfort with sharing a locker room with Thoma (Though she didn’t mention whether she actually saw Thomas in the locker room).

Gaines has since become a right-wing darling for continually speaking out about the issue. Her voice has joined a growing chorus of those who cast trans people as a threat to women’s and children’s safety. This chorus not only inspires legislation that harms trans people’s well-being, it also inspires violence against the greater LGBTQ community.

Anti-LGBTQ Rep. eviscerated for his response to the mass shooting at an LGBTQ bar in his district