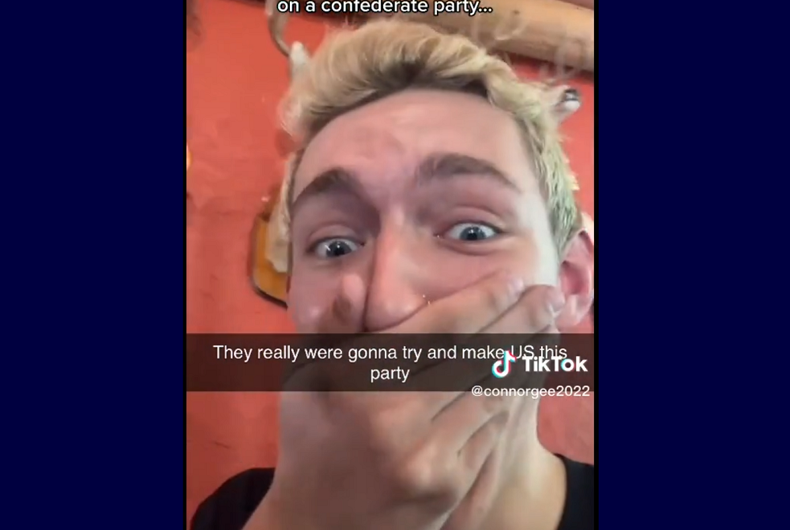 Connor in his viral videoPhoto: Screenshot

A gay TikToker named Connor is speaking out against his former employer, a Texas restaurant that asked both him and a Black employee to serve a Confederate group.

Last week, Connor posted a seven-second video that said, “when your ex job tried to put the only gay server and the only black server on a confederate party…”

The video shows a room with a Confederate flag and a piece of paper identifying the group as the Sons of Confederate Veterans, whose website says it is dedicated to “preserving the history and legacy” of the “heroes” who fought for the South in what it calls the “Second American Revolution.”

The video has since reached 1.5 million views.

In a follow-up video, Connor explained more details about his experience at what the Daily Dot identified as the Texas Music City Grill and Smokehouse in Tyler, Texas.

Connor said he came in on what seemed like a normal day when he and the other waiter – who he said was his best friend Yasmine – had been assigned to work the gathering.

Connor said he looked around the room in shock and then “turned right back around and walked the f**k out.”

He then showed the room to Yasmine and said they were both “in awe.”

“And so we’re both like, ‘no we’re not taking this party. That’s a set up. That is a set up. We’re going to get treated sh**ty and then get no tipped and possibly hate crimed.'”

The pair then told their managers they refused to work the party. They weren’t forced to do it, but Connor still wanted his viewers to know that the restaurant welcomed the Sons of Confederate Veterans.

“They are regulars there. They come once a month on Thursdays…And that f**king place eats them up. They love them. That place is so, oh the stories that I have, the stories that Yasmine has. They have a whip on the wall. And me and her both stuck there for 6 months for what? And now that I quit today, I’m about to air that place out.”

Connor told the Daily Dot that another group, whose name he did not know, would often visit the restaurant and talk about its desire for Texas to secede from the United States and ban marriage equality.

“I would talk to the owners, and they actually agreed with the groups and invited them in with open arms,” he said. At one point, he said, one of his co-workers used an anti-gay slur against him.

After hanging on to the job because he needed the money, Connor eventually couldn’t take it anymore and quit.

On TikTok, users commented in solidarity with Connor and stated they were ready to listen to every single story he was willing to tell.

“Omg the fact that the manager didn’t even say anything to you guys knowing damn well you could’ve been in REAL danger is crazy to me,” one user wrote.

Another stated they would have swapped all the party decorations out for rainbows.

Club Q hero speaks for the first time: “When you come out of the closet, come out swinging.”