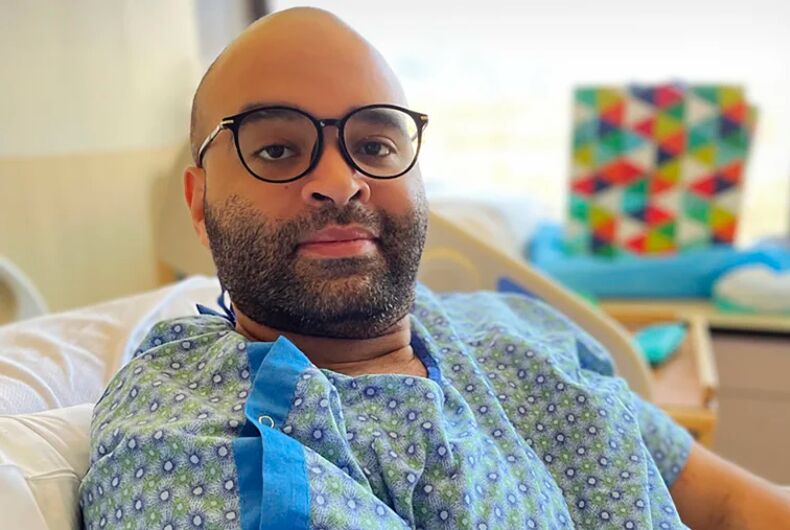 One of the heroes credited with taking down the Club Q shooter in Colorado Springs has spoken out for the first time.

U.S. Navy Petty Officer 2nd Class Thomas James issued a statement from his hospital bed, where he is still recovering from injuries that have not been made public. He is reportedly in stable condition.

And his message was clear: Do not let hate win.

“I simply wanted to save the family I found. If I had my way, I would shield everyone I could from the nonsensical acts of hate in the world, but I am only one person.”

“Thankfully, we are family, and family looks after one another. We came a long way from Stonewall. Bullies aren’t invincible. I want to support everyone who has known the pain and loss that have been all too common these past few years.”

“My thoughts are with those we lost on Nov. 19, and those who are still recovering from their injuries. To the youth, I say be brave. Your family is out there. You are loved and valued. So when you come out of the closet, come out swinging.”

According to Colorado Springs Police Chief Adrian Vasquez, James and Richard Fierro — a straight, 15-year Iraq and Afghanistan military veteran — both charged at the shooter during the attack. While James pushed one of the shooter’s guns out of his reach, Fierro beat him bloody with his own handgun.

Fierro told the New York Times that James helped him drag the shooter to the ground and, after Fierro told him to, kicked the shooter in the face over and over.

James’s friend David Wehlan told NYT that he was not surprised to hear about the heroism James exhibited.

“It didn’t matter where it would be. If Thomas was somewhere and gunfire lit out, quiet Thomas would be the one who would jump up and run to protect people. Because if you just know him, you know that he doesn’t want to see people hurt.”

Club Q shooter’s father taught his kid to be violent: “I told him it works”