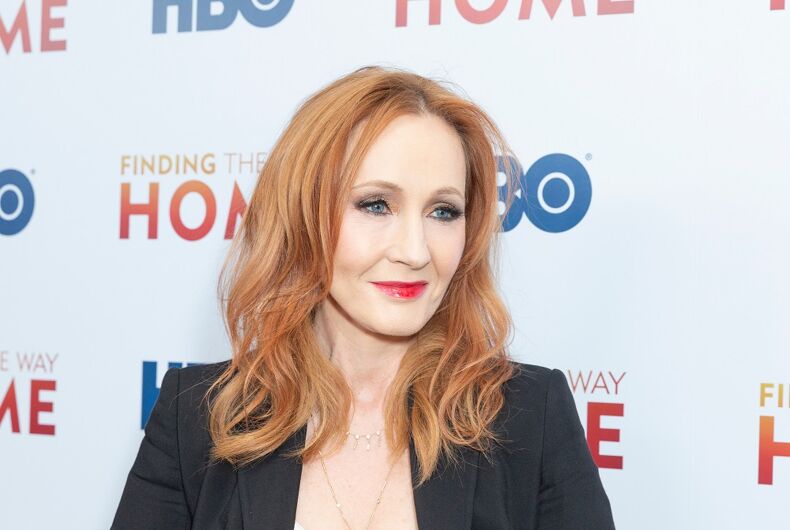 Amid continued controversy with both JK Rowling and out nonbinary actor Ezra Miller, Warner Bros has stopped the development of the Fantastic Beasts franchise.

There have thus far been three films in what was supposed to be a five-film Harry Potter spinoff series, but Variety recently revealed that there are no current projects in development.

The third movie, Fantastic Beasts: The Secrets of Dumbledore, was the lowest-grossing of any Harry Potter-related film, according to Pink News.

After it premiered in April, there was already talk that it would be the last edition of the series.

Between JK Rowling’s continued anti-trans statements and scandals surrounding Miller, who plays Credence Barebone in the movies, many are not surprised that production has stalled.

Rowling continues to perpetuate the myth that trans women are a danger to cis women and that trans men aren’t capable of knowing their own identities. Since 2019, Rowling hasn’t stopped attacking transgender people, writing long essays denigrating them, repeating baseless conspiracy theories about kids being coerced into transitioning, and promoting transphobic merchandise vendors on social media.

And the backlash has made Rowling camera-shy. Variety noted in April that, while she appeared at the world premiere for The Secrets of Dumbledore, she refused to talk to journalists or take pictures on the red carpet with the cast. She hasn’t been talking to the media or even posting much on social media – it doesn’t appear that she has mentioned the global premiere of the film to her 14 million Twitter followers – which contrasts with how she helped promote previous films based on her books.

And over the last two years, Miller has been involved in multiple disturbing incidents and scandals in what a Vanity Fair exposé described as an intense mental health crisis.

In 2020, a video of the actor apparently choking a woman outside a bar in Iceland went viral.

In March, they were arrested in Hawaii after becoming aggressive with the patrons of a karaoke bar. Miller said that they had been assaulted twice at the bar, accused an arresting officer of touching their genitals, and demanded to be searched by a female officer because they are nonbinary and transgender.

That same month, a couple who bailed Miller out of jail for the earlier arrest filed for a temporary restraining order against them after the actor allegedly burst into the couple’s bedroom, threatened them, and allegedly stole a social security card, wallet, passport, driver’s license, and bank cards.

In May, Miller was charged with felony burglary for allegedly breaking into a Vermont neighbor’s home and stealing bottles of liquor.

In August, according to Vanity Fair, Vermont State Police were dispatched to Miller’s farm with an emergency order from the Department for Children and Families to remove three children who had moved into the actor’s household with their mother.

Those close to Miller say the actor’s Vermont farm is stocked with guns, and they have developed a cult-like atmosphere around them.

Miller has described themself as “polyamorous,” but multiple people described their situation as more akin to a “court harem” and “a patriarchal dictatorship where Ezra controls all the sex as the man, and plays the women against each other, screams at them, belittles them in front of the others.”

“I now understand that I am suffering complex mental health issues and have begun ongoing treatment,” Miller said in an August 15 statement. “I want to apologize to everyone that I have alarmed and upset with my past behavior. I am committed to doing the necessary work to get back to a healthy, safe, and productive stage in my life.”

Miller is now reportedly working with a publicist who specializes in crisis management ahead of the planned 2023 release of The Flash. But according to Vanity Fair some friends question Miller’s commitment to getting help.

“If he is going through therapy,” one said, “he’s just acting through it.”

Rowling has also shown no sign of slowing her public campaign against trans people’s right to exist.

Variety‘s report on the Warner Bros Discovery earnings call said the company is not currently working on a continuation of the Fantastic Beasts franchise, but it did say that CEO David Zaslac isn’t finished with Rowling.

Zaslav reportedly said there is still the possibility the company – who has not explicitly denounced Rowling’s anti-trans rhetoric – to do “something” with the Harry Potter author since the movies have provided so much profit for the company.