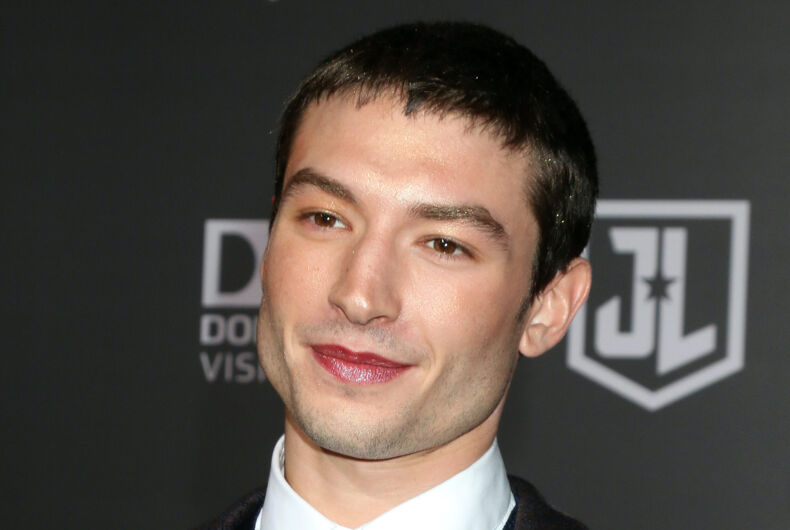 Ezra Miller at the 2017 premiere of "Justice League"Photo: Shutterstock

Police in Stamford, Vermont charged non-binary actor Ezra Miller with felony burglary for allegedly stealing bottles of liquor from a man’s home. The charge is just the latest of many legal accusations against the 29-year-old actor.

According to a recently released police statement, around 5:55 p.m. on May 1, Miller may have entered the unoccupied residence of a 33-year-old man named Isaac B. Winokur and stole “several bottles of liquor.” Police issued Miller a citation for the offense on the night of August 7 and told the actor to appear in a state court on September 26.

“As a result of an investigation that included surveillance videos and statements, probable cause was found to charge Ezra M. Miller with the offense of felony burglary into an unoccupied dwelling,” the Vermont State Police said in a Monday press statement.

The charge is just the latest recent accusation to face Miller, the actor who played a gay teen in the 2012 film The Perks of Being a Wallflower, appeared in the Fantastic Beasts series, and stars in DC’s upcoming superhero film, The Flash, about a man who runs at supersonic speeds. Despite all of the recent scandals surrounding the actor, the movie is still slated to be released next year.

In June, the parents of Tokata Iron Eyes, an indigenous American activist, petitioned a tribal court to issue a protection order against Miller. Iron Eyes’ parents said that Miller had allegedly controlled their daughter for years through intimidation, theft of her personal belongings, and drugs.

Miller reportedly met Iron Eyes at the Standing Rock Reservation in South Dakota in 2016. At the time, she was 12 and Miller was 23. As their friendship grew over the following years, her parents alleged that Miller gave the underage girl alcohol, cannabis, and LSD. Her parents said they had to spend three weeks “detoxifying” her after she spent a prolonged period with Miller.

Iron Eyes’ parents then said she dropped out of a Massachusetts private school and moved to Vermont to live close to Miller when she was still underage. When her parents visited her in Vermont, they said that Miller had taken her driver’s license, car keys, and ATM card, essentially trapping her. They also said they saw bruises on her body that Miller had allegedly caused.

In June, Iron Eyes released a social media statement thanking her “comrade” Miller for their “loving support and invaluable protection” and accusing her parents of subjecting her to “emotional and psychological manipulation” while in their home.

“I am an adult and I deserve to feel authority in my own body,” Iron Eyes wrote. “My choices are my own, and as to the nature of police intervention in my ‘case’ it is unnecessary and it is a waste of time and resource.”

In late March, Hawaii police arrested Miller for disorderly conduct and harassment after Miller reportedly become aggressive with a karaoke bar’s patrons. Miller said that they themself had actually been assaulted twice at the bar. Miller reportedly offered to show police video footage of the alleged assault. Miller accused an arresting officer of touching their genitals and demanded to be searched by a female officer, owing to Miller’s non-binary and transgender identities.

That same month, two residents in Hilo, Hawaii who bailed Miller out of jail for the previously mentioned arrest, filed for a temporary restraining order against Miller after the actor allegedly burst into the couple’s bedroom and told the male partner, “I will bury you and your slut wife.” The couple accused Miller of stealing a social security card, wallet, passport, driver’s license, and bank cards. Miller had been staying with the couple.

In April 2020, a video of Miller taken at a bar in Reykjavik, Iceland appeared to show Miller choking a female bar patron. The seven-second video didn’t include enough context to fully understand what occurred. The woman appeared to laugh and smile before Miller grabbed her. However, Variety reported that Miller had been “frustrated and angry” at the time.

Though the video went viral on social media, the bar’s employees reportedly escorted Miller from the premises, and police weren’t called to the scene.

Film director and comic book geek Kevin Smith, who previously directed episodes of The Flash television show on the CW, said in a recent videocast that the recently merged Warner Brother Discover company should have considered canceling Miller’s future superhero films rather than shelving a Batgirl movie that featured a transgender character.

“That is the baffling thing,” Smith said on his videocast Hollywood Babble-On. “I don’t give a s**t how bad the Batgirl movie is. Nobody in that movie is complicated or has anything in their real life you have to market around. In The Flash movie, we all know there’s a big problem. Flash is the Reverse-Flash in real life.”