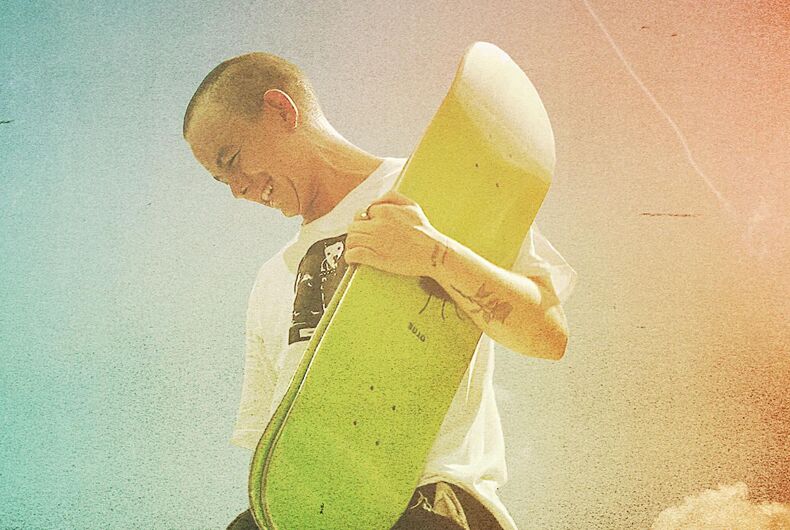 Leo Baker is a professional skateboarder who qualified for the Olympics in 2021 but quit the American team to complete their transition. As a non-binary individual, Baker has brought light to trans issues in skateboarding and has been an advocate for trans kids in sports and their fight to be able to transition safely.

And that’s what Baker is hoping people will take away from their new Netflix documentary Stay on Board: The Leo Baker Story.

“A lot of stuff came to the surface while making this documentary and I’ve given interviews on being marginalized in the skating world and I’ve learned a lot about myself during the experience. It’s less about learning about who I am now but just embracing who I am without questioning it. I’m tired of talking about it all and I’m ready to just be. I’m tired of fixed identities informing my decisions.”

“I’ve been on a simple wavelength of listening to oneself. My main takeaway is for people to listen to children. I want people to listen to what children want, and what they are saying. If this documentary provides a spotlight on what’s happening to trans kids across our country, then I’ll be happy.”

Baker is alarmed by how many states are passing trans sports bans in a year where hundreds of anti-LGBTQ bills have been filed across the country. As of July, 18 states have passed sweeping anti-trans sports bills that make it so trans girls can’t compete in sports with other girls. These bills are not only unnecessary but are harmful to the well-being of trans athletes.

The documentary explores Baker’s gender identity journey from being a kid to becoming one of the foremost professional skateboarders in the country. Baker provides gripping testimonials on their experiences playing the sport and the emotional endurance they have when it comes to figuring out their identity.

When asked what the process was like making the documentary, Baker admits that it was a challenge at times.

“It was a simple documentary and I was down for being the subject. That period of my life was so delicate and fragile and everything happened in real time while we were making it. So, it was a bit challenging at times. I’ve spent so much time in my own headspace that it was at times really hard to go through with. But it was also soothing in a way being able to go through everything with so much support behind me.”

A lot of that support is shown on camera coming from mom Donna and the rest of Baker’s family, but it is clear that figuring out their identity took a toll. But Baker is ready to move on from this chapter in their life and to see what comes next. After healing, the past has been closed and Baker is excited for the next phase of their life and career.

“I see the past as a closed chapter of my life that I’m happy to see the end of. Focusing on what’s happening right now is the place I want to be right now and not exactly worrying about what’s happened in the past. I’m just so grateful that I have a life right now that I can live.”

Baker’s gender identity journey may have been in the past but Baker is still discovering new things about themselves. And instead of questioning who they are, Baker wants to accept who they are completely and figure out more about the world they live in, while continuing to skate.

“The big question for me is the why behind things. Now that I’ve developed a great relationship with myself, I’m excited to be on a different vibration of creating things and continuing to skate. But it’s all coming to me, it’s still in process.”

At least one thing is for sure: Baker won’t stop skating or fighting any time soon. Stay on Board: The Leo Baker Story will debut on Netflix on August 11.