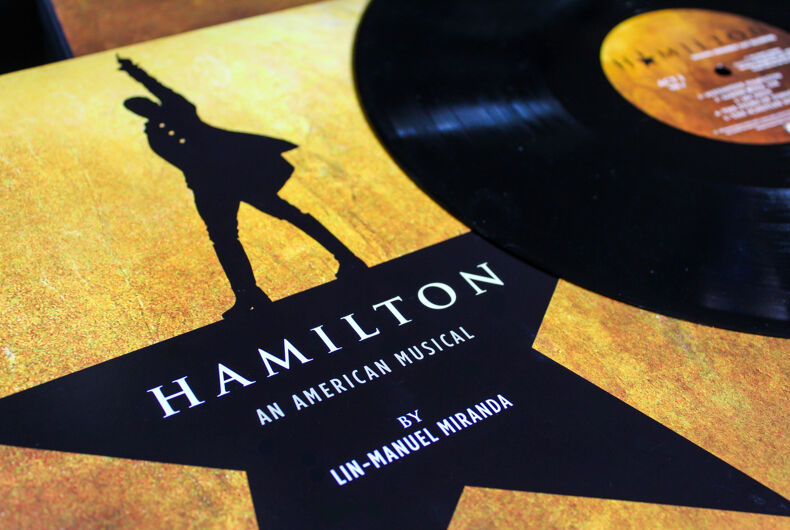 The Door McAllen — a church in the northern suburb of McAllen, Texas — could face a lawsuit from the creators of the award-winning 2015 Broadway rap musical Hamilton after the church put on an unauthorized version of the musical. Its version contained references to Christianity and ended with a sermon comparing homosexuality to drug addiction, neither of which were in the original show.

On top of all that, the church’s pastor Roman Gutierrez claimed that “the Hamilton team” had given the church “the license to perform” their version. Hamilton’s creators responded by saying that they most certainly hadn’t. The creators also said that it retained the right to pursue future legal action against the church.

The church put on its production this past weekend. Video clips of the show, posted online by Hemant Mehta, revealed the different ways that the show’s producers shoehorned in references to Christianity.

The original musical featured people of color singing hip-hop songs while retelling the real-life biography of Alexander Hamilton, one of the founders of the U.S. government. During the musical, Hamilton, his friend John Laurens, and his eldest son Philip all die after participating in separate gun duels.

In the church’s version, Hamilton is asked to accept Jesus Christ as his personal lord and savior after Laurens dies.

I don’t remember this scene in the original production. pic.twitter.com/k1vA8CClhq

Historically, Hamilton was Christian for most of his life, though historians say he never joined a church and might have identified as Christian only to rise in U.S. political life.

The church’s version also removed some of the musical’s sexual song lyrics and included others in which Hamilton’s wife sang to him, “I’m not afraid, my hope is in Jesus. If you could just give him a chance today, that would be enough.” In the original song, the lyrics imply that she is okay with Hamilton’s perpetual busyness because “I know who I married.”

The song is supposed to go:

"But I’m not afraid
I know who I married
So long as you come home at the end of the day
That would be enough" pic.twitter.com/CUitoUXQ34

In the original script, one of the characters sings, “What is a legacy? It’s planting seeds in a garden you never get to see. I wrote some notes at the beginning of a song someone will sing for me.”

According to a video, the church changed the lyric to, “What is a legacy? It’s knowing that you repented and accepted the gospel of Jesus Christ that sets men free. You sent your sinless son of man on Calvary to die for me.”

Lopez’s homophobic sermon is particularly ironic considering that the real-life Hamilton’s own letters to Laurens suggested that they might have shared romantic feelings for one another. Also, Hamilton‘s author Lin-Manuel Miranda opposes homophobia so much that, in June, he helped launch an initiative to support Florida’s Latinx LGBTQ community.

Although Gutierrez had claimed that the play’s creators had given his church permission to stage its version, in a statement, the official Hamilton team wrote, “Hamilton does not grant amateur or professional licenses for any stage productions and did not grant one to The Door Church.”

The team said that after finding out about the unauthorized production, it sent the church a cease-and-desist letter, but allowed the church to hold a second showing of its musical on Saturday, just as long as the church removed all promotional videos and images from the internet and promised not to hold any additional showings.

The statement added, “This limited permission was without prejudice, and we reserved all rights and remedies,” which, in legal terms, means that the team reserves the right to sue in the future.

In a tweet noting the church’s production, Miranda wrote, “Grateful to all of you who reached out about this illegal, unauthorized production. Now lawyers do their work.” His tweet included a letter from The Dramatists Guild of America, a professional organization for playwrights, composers, and lyricists working in the U.S. theatre market, which condemned the church’s “blatant infringement” of Miranda’s work.

Grateful to all of you who reached out about this illegal, unauthorized production. Now lawyers do their work.
And always grateful to the @dramatistsguild, who have the backs of writers everywhere, be it your first play or your fiftieth. 1/2 https://t.co/yMtM3z9crI

“No writer’s work, whether they are a student who has just written their first play, or Lin-Manuel Miranda, can be performed without their permission. And it is never okay to change the words, lyrics, or notes without their express consent,” the guild’s letter stated.

This isn’t the first time the church has done something like this. The church also previously staged a production of Disney’s Beauty and the Beast in which the heroine Belle introduces the Beast to Jesus, something that totally did not happen in the original cartoon or stage versions.

I don’t remember this scene in the original production. pic.twitter.com/k1vA8CClhq

Seeing this clip of Door McAllen’s 2018 “production” of ‘Disney’s Beauty & the Beast’ where they added a scene(something Disney would “totally” allow) where Bell introduces Jesus to the Beast is absolutely an improvement on the original script…🙄 pic.twitter.com/0j9Gd3FuOU