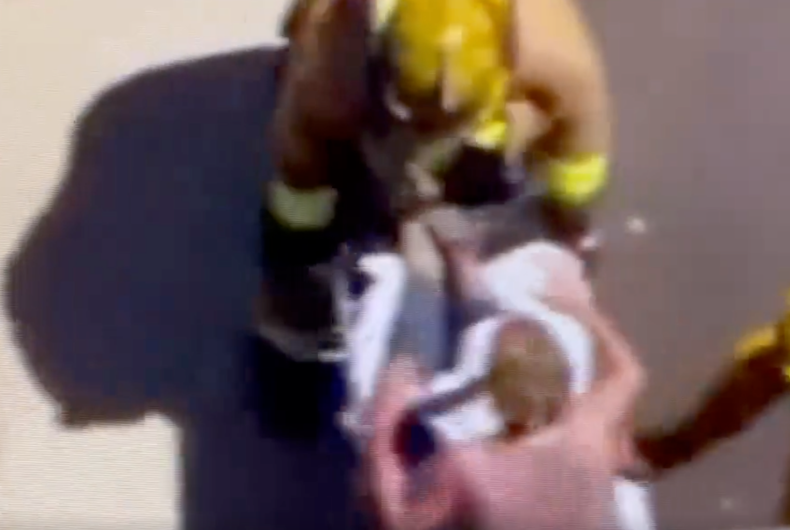 Shocking video posted across social media reveals the timeline of actress Anne Heche’s fiery crash into a house on Los Angeles’ West Side.

On Friday, Heche crashed her blue Mini Cooper into a home in the Mar Vista neighborhood of LA, setting the house ablaze. 59 firefighters battled the fire, which engulfed both Heche’s car and the one-story house she crashed into.

Heche was trapped for 65 minutes in the inferno before she could be safely pulled from the wreckage. She was reportedly able to communicate at the time but lost consciousness shortly thereafter.

On Saturday, Heche’s publicist released a statement that said the Emmy-nominated actor was “in stable condition.” By Monday, her condition was described as “critical”.

“At this time Anne is in extreme critical condition,” Heche’s rep reported. “She has a significant pulmonary injury requiring mechanical ventilation and burns that require surgical intervention. She is in a coma and has not regained consciousness since shortly after the accident.”

Heche’s downgraded condition coincides with reports the actress may have been driving drunk.

Glass said Heche acted like “a sweet little girl,” and was “very pleasant.”

He added that during the appointment, Heche “grabbed my face” and wondered if he had done her hair before. He said he hadn’t but offered to work with her.

He posted a pic of their “random” meeting on Instagram.

Shortly after, surveillance video reveals the same blue Mini Cooper from the fiery collision crashed in a back alley in the vicinity. After being confronted by an individual warning he would “call the cops”, the footage shows the Mini Cooper driving away quickly from the scene.

Here is video obtained by TMZ, sent to LAPD. There are other videos, as well. The LAPD is apparently doing a full investigation. Let’s hope for justice for the victim and that Anne Heche has a speedy recovery so she can serve time in jail and pay restitution and punitive damages. pic.twitter.com/z0x4HOMAzJ

The blue Mini Cooper is then seen on home security footage speeding down a residential street, followed by the sounds of an impact.

Footage of Anne Heche flying through a residential area before hitting the house. This is crazy 😳 You can hear the impact at the end.#annehecheaccident #annehechecrash

It’s a MIRACLE no one aside from her was hurt.

The impact and resulting fire left the house largely destroyed.

Heche’s removal from the site was captured from news helicopters circling the fire’s aftermath, unaware at the time of the identity of the individual being wheeled on a gurney to a waiting ambulance. Reporters are shocked when the patient, covered completely as paramedics move the body, suddenly lurches up.

The extent of the damage to Heche’s vehicle can be seen as it’s towed from the impact site.

Here’s the now mangled vehicle owned by actress Anne Heche being towed away after speeding and crashing into a Mar Vista home and sparking a fire. @CBSLA pic.twitter.com/rRSqnM1YDt

On the same day of the fiery crash, an episode of Heche’s podcast, “Better Together,” dropped. While the show was recorded earlier in the week, Heche refers to two bottles of vodka at the table given to her and co-host Heather Duffy. Duffy says during the recording that their audience would “be shocked to know we are actually stone cold sober right now,” though Heche’s slurred speech calls that assertion into question.

“File this one under fingers crossed!” Heche said at the start of the show.