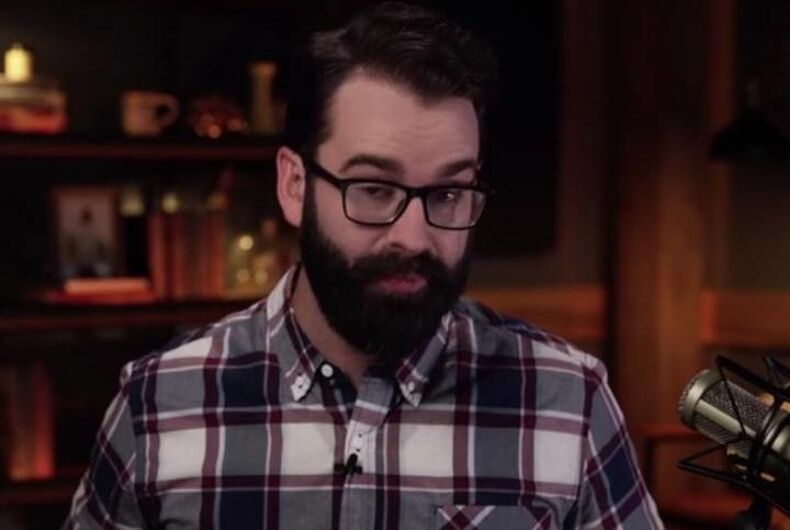 Conservatives are expressing anger that a student allegedly ate pages from the Bible at a protest of anti-LGBTQ Daily Wire writer Matt Walsh speaking at their campus.

Students at the University of Wisconsin-Madison (UW) protested against a screening of Walsh’s anti-trans film What is a Woman? and a guest lecture he was scheduled to deliver last week.

In one clip shared on Twitter by the conservative Young America’s Foundation (YAF), a student can be seen eating what appears to be a page from a book. YAF identified that book as the Bible, but YAF also promoted the false conservative story that the man who attacked Paul Pelosi is a gay leftist, so there is a chance that their identification of the book is also incorrect.

Protestors have now shredded The Bible and one began eating pages pic.twitter.com/o5DACq64LP

In another clip shared online by YAF, a student with a rainbow flag led protestors in a chant of “Trans rights are human rights.”

The protestors have arrived ahead of @MattWalshBlog’s #WhatIsAWoman screening at University of Wisconsin- Madison pic.twitter.com/KvxmZiImtS

On Twitter, most conservatives were expressing their disapproval by asking why the protestors weren’t concerned about the Koran, even though Walsh and the lawmakers persuaded by his transphobia are nearly uniformly Christian, not Muslim.

Others said that they would pray for the protestors or accused them of working for the devil.

There will be a day when they answer for this. Sadly, they will remember it for eternity. Satan is the great deceiver and he has so many deceived.

Heartbreaking 💔 Lord, I pray they ask for forgiveness & turn to Jesus Christ before it’s too late.

Well, at least the word is getting in them. Hope it sticks and transforms their lives for the better

Pray for them, don't hate them as that is what the deceiver wants you to do.

Walsh has made a career out of anti-LGBTQ rhetoric, including with his film.

Walsh’s film purports to be an earnest inquiry into womanhood. But as LGBTQ Nation’s Erin Rook wrote in their review of the film, “Walsh’s anti-trans agenda is clear from the start. No matter how many times he repeats the central question, Walsh is really asking: ‘Are trans people crazy or what?’ and inviting viewers to join him in his conclusion that gender transition is a threat to both individuals and society.”

In February, transgender activist Eli Erlick notified the community that Walsh had set up a fake organization, The Gender Unity Project, to try and get trans people to talk on camera for his film. Twitter later removed the organization’s account after Erlick revealed the deception.

In May, a trans man named Steph Kyriacou accused Walsh of non-consensually using his Instagram photos in the film’s trailer, The Daily Dot reported. After Kyriacou publicly complained about it on social media, he received “multiple transphobic replies and tweets” and no response from Walsh, he said.

Walsh’s documentary is filled with misinformation and distortions, including claims that gender-affirming surgeries are dangerous and experimental (they aren’t), that children can’t know if they’re transgender (they can), and that trans identities are a modern and Western invention (they’re not).

Walsh also opposes gay rights and said that the Buttigieges shouldn’t have been allowed to adopt children because “babies need their mothers.”

Last week, he organized a “Rally to End Child Mutilation” that attracted the fascist Proud Boys and other white supremacists. Protestors held signs that said “Doctors who mutilate children should be killed” and “homo sex is sin.” One of several Proud Boys flashed a white nationalist hand signal during the event, Media Matters reported.

Walsh said that the left believes in “castrating children… drugging and mutilating kids,” even though gender-affirming surgery is almost never performed on children and genital surgery never is.
Bias Watch
Bible, Matt Walsh, Protest, University of Wisconsin, What is a Woman

Marjorie Taylor Greene’s district is queerer than you think