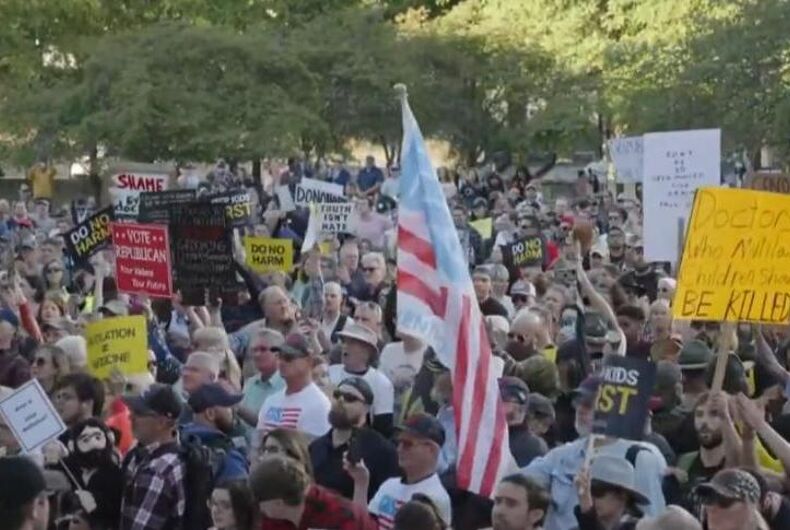 White supremacists and Proud Boys joined other far-right politicians, pundits, and protestors at a recent “Rally to End Child Mutilation” in Nashville, Tennessee. Some of the protestors held signs supporting death and violence against doctors who provide gender-affirming care to transgender youth, and a Republican elected official was in attendance.

At the rally, one protester held a sign that said, “Doctors who mutilate children should be killed.” Another held a sign that said, “Mutilate the mutilators.” One protestor told counterprotesters, “No mutilators. Mutilators go home.” Other signs declared “homo sex is sin” and that “hellfire awaits” gay people. One of several Proud Boys flashed a white nationalist hand signal during the event, Media Matters reported.

Blackburn and Gabbard and other speakers also repeated Walsh’s claim that gender-affirming care “mutilates” children. Such rhetoric has been used to vilify health centers and has led to bombing and death threats against medical professionals. In reality, gender-affirming surgeries are only rarely performed on trans minors, and genital surgeries are never performed on them.

“Look, you all are happy warrior freedom fighters,” Blackburn said during her speech. “You are not going to let the left get their way with our children.”

Though such surgeries have very low rates of regret, VUMC announced in early October that it would stop all gender-affirming procedures on minors for several months while reassessing its policies. It did this after 62 Republican state representatives wrote a letter asking VUMC to stop. VUMC noted that it had performed very few gender-affirming surgeries and had never conducted genital surgeries on minors.

After the rally, Walsh referred to the event’s counterprotesters as “satanic leftist zombies,” “emotionally disturbed freaks and losers,” “disgusting hellspawns,” and “screeching goblins” before asking his followers which side of the issue they’d like to be on.

Five people who are putting a face to asexuality