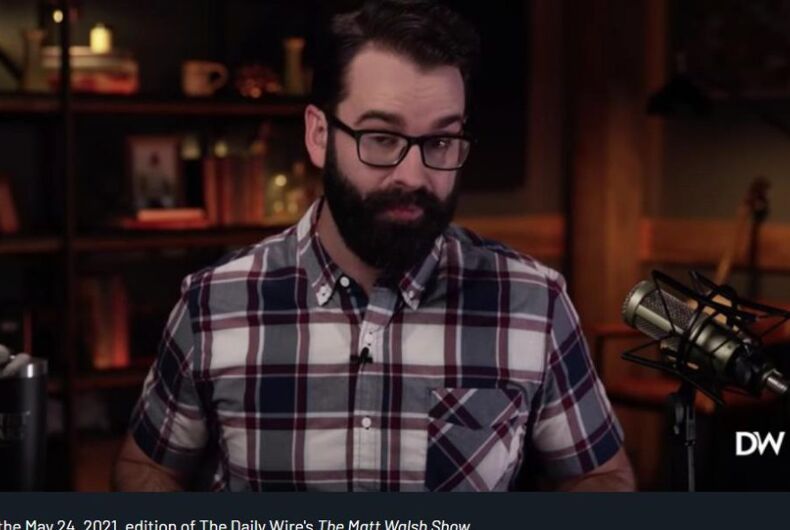 Trans activist Eli Erlick has revealed that conservative podcaster Matt Walsh tried to trick her into participating in an anti-trans documentary.

“So @MattWalshBlog‘s crew is trying to trick trans people into joining a fake documentary,” Erlick wrote on Twitter. “His producers set up a whole front organization (@GenderUnityProj) and tried to recruit me into his next anti-trans documentary.”

Related: Republicans refuse to strike down marriage amendment for the most offensive reason possible

Erlick proceeded to post a long thread explaining “the wild story of how it went down.”

It began, she explained with an email from the so called Gender Unity Project, which Erlick said claimed to be working on a film about the lives of LGBTQ people.

“They… gave me names of well-known trans individuals and surgeons that had interviewed. It all seemed normal at first,” Erlick said.

Erlick even spoke on the phone with the producer, Makenna Lynn Waters, who presented herself as a cis film graduate who was “well-meaning” and “curious.”

So @MattWalshBlog's crew is trying to trick trans people into joining a fake documentary. His producers set up a whole front organization (@GenderUnityProj) and tried to recruit me into his next anti-trans documentary. Here's the wild story of how it went down (1/x): pic.twitter.com/Kqy3x5oZQe

The first red flag arose when Waters told Erlick the documentary was self-funded.

“I was suspicious because she had finished college recently, but figured she was just rich,” Erlick said.

The red flags continued, but nothing that Erlick, a PhD student who studies the far right and has participated in several documentaries, hadn’t seen before.

For example, when the release form she was sent didn’t have the company’s name on it, she did more research into the Gender Unity Project and found the names of the owners were shielded by a registered agent in their place.

But Erlick kept digging, this time trying to find out what she could about Waters, who had only presented herself to Erlick as Makenna Lynn. No one by that name came up in her web searches, but eventually, she realized it was Makenna Waters, who is Matt Walsh’s producer.

“That’s not a red flag: that’s a gun to your face,” Erlick wrote.

Walsh is extremely explicit in his anti-LGBTQ beliefs.

In a January tweet, he warned that he “will be waging an all out assault on gender ideology” and that “we can win this battle.”

In response to the birth of Pete and Chasten Buttigieg’s twins, he said “two men shouldn’t be allowed to adopt babies,” adding that neither should two women. And in 2021, he rented a home in Loundon County, Virginia just so he could speak against the county school district’s pro-transgender student policies.

Walsh also once posted a photo of Maybelline’s first male model, Manny Gutierrez, and wrote, “Dads, this is why you need to be there to raise your sons.”

This year I will be waging an all out assault on gender ideology. We have been working on something that will make the Dr Phil episode seem tame and boring by comparison. I can’t say anything else about it but it will change the conversation. We can win this battle.

Dads, this is why you need to be there to raise your sons. pic.twitter.com/8ybirgppKi

Upon discovering Walsh’s connection to the documentary, Erlick then found that the Gender Unity Project was registered to the far-right filmmaker Justin Folk, who also works for Walsh.

She proceeded to warn other trans people to “stay alert and take any media personalities with a grain of salt.”

“And they say we’re the ones tricking people? your move @MattWalshBlog,” she concluded.

Erlick also lamented that no matter what, the situation is giving Walsh the media attention he craves.

“Matt Walsh knows what he’s doing,” Erlick told Buzzfeed. “Now we are giving him a bunch of free press.”

“It’s really a win-win situation for him,” she said. “That’s why we should absolutely avoid engaging with far-right media… but we can continue to report his social media accounts and maybe there’ll be enough outrage that he will finally be banned from the platform.”