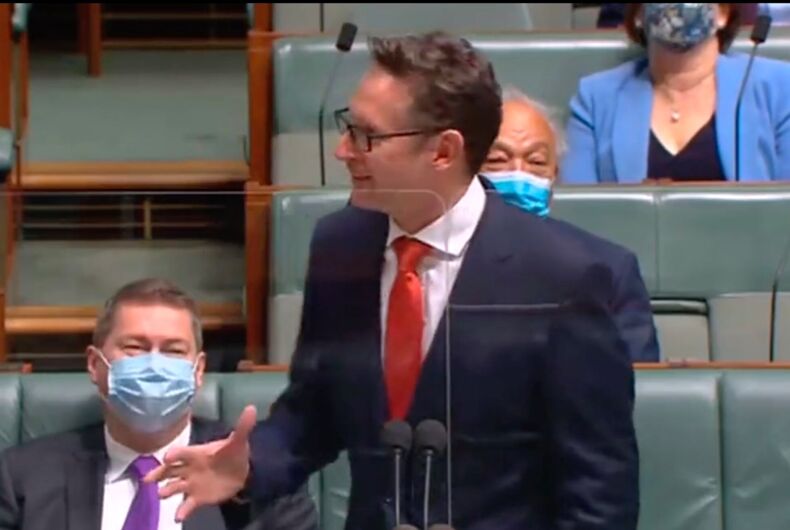 In an emotional speech, an Australian member of parliament (MP) spoke out against an anti-LGBTQ Religious Discrimination Bill by revealing that his gay 15-year-old nephew had recently died by suicide.

“Last week my family said farewell to my nephew Ollie,” said Labor MP Stephen Jones. “He was just 15 when he took his own life.”

“No mother or father should have to endure this sight. No brother should have to clean up afterwards. He was a beautiful, creative, courageous young man. He was loved and accepted by his parents, by his family, by his friends and community.  His mum and dad are in anguish. We all are.”

Jones went on to say that Ollie was gay and “uncertain about his gender” and also that he experienced mental health challenges.

“But now he is gone and we’re no longer going to be able to love and support him on his journey through life. Clearly the love and acceptance of his family and friends were not enough.”

Jones also brought up his own son, a “beautiful, creative, intelligent” 14-year old who “has more courage than any boy I’ve ever met.”

He said his son designs his own clothes, “moves seamlessly between the wardrobes of men and women,” and is a “gifted makeup artist.”

He added that he loves his son unconditionally but worries every time he leaves the house.

“I think to myself, ‘You look beautiful, but do you have to go out looking like that?’”

He said he knows that his son might not face the same acceptance in the outside world as he does at home and then added that this is not only about his own family.

“It’s about all of our kids. It’s about about the families of those kids, every child who has the courage to swim against the tide just to be who they are.”

The bill against which Jones spoke, which is supported by anti-LGBTQ Prime Minister Scott Morrison, would give religious organizations the right to discriminate against LGBTQ people and would leave LGBTQ youth vulnerable to discrimination in schools.

It could even lead to LGBTQ youth being expelled from religious schools.