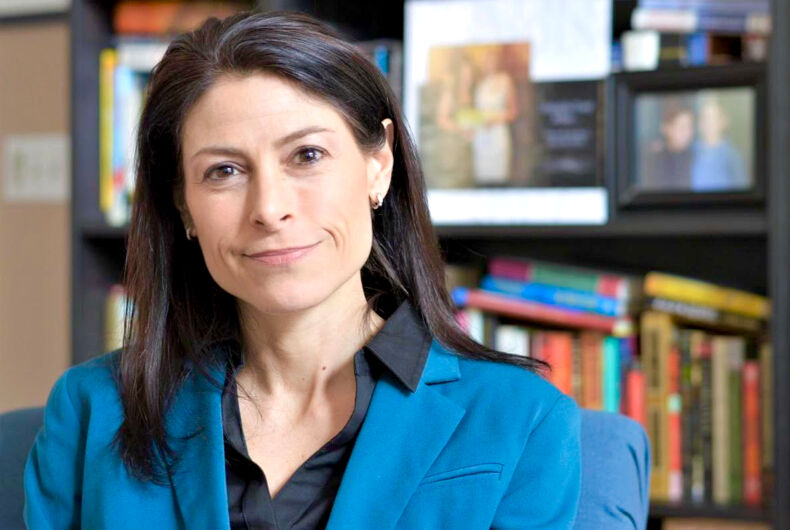 In what history may judge one day as the War for Democracy in the United States, the Battle of Michigan’s outcome in 2022 will be a harbinger of things to come.

The Midwestern swing state, which Donald Trump won in 2016 and lost in 2020, spawned a kidnapping plot against its Democratic governor and has deep ties to the January 6 Insurrection. It also features a slate of Trump-backed, election-denying candidates fighting to topple pro-democracy incumbents in races across the state.

Michigan Attorney General Dana Nessel faces one of the most extreme.

MAGA Republican Matthew DePerno is “incredibly radical and just flat-out dangerous for the state of Michigan,” Nessel, who’s running for a second term, told LGBTQ Nation. “He wants to undermine the vote here in Michigan. That’s why he ran for office. That’s why Donald Trump hand-selected him as his candidate and came out to Michigan multiple times to campaign for him. Because he knows that if he runs for office again in 2024 to seek the presidency, he can count on Matthew DePerno as one of his soldiers to assist him in undermining the vote in Michigan and to ensure that, whether the voters of the state of Michigan want it or not, that Donald Trump receives those 15 electoral votes. That’s why he was at the Capitol with the Trump campaign on January 6 of 2021, and that’s why he worked hand-in-hand with them on these Antrim County lawsuits in order to try to undermine people’s faith in democracy.”

Months after the election was called for Joe Biden, DePerno led a lawsuit in Antrim County seeking an audit of Michigan’s results, advancing a conspiracy theory that Dominion voting machines switched votes from Trump to Biden. When the case was dismissed in May, DePerno continued to sow doubt, asking, “How can anyone trust the system in the future?”

The Trump-backed candidates for governor, Tudor Dixon, and secretary of state, Kristina Karamo, are both election deniers. The former president recruited Black for Trump supporter Karamo for the post when she claimed she witnessed election fraud in Detroit in 2020 working as a poll challenger.

A Detroit News poll for October 26-28 had Nessel and DePerno in a dead heat.

Nessel is the first out official in Michigan to hold statewide office and the country’s second out Attorney General. She first blew up in the Wolverine state and among national political cognoscenti at the end of 2017, with her memorable “penis” spot, produced amid accusations of sexual misconduct by a raft of public figures, all men, from U.S. Senate candidate Roy Moore of Alabama to Hollywood’s Harvey Weinstein. In the ad, Nessel prosecuted her case for election as Michigan AG with the question: “Who can you trust most not to show you their penis in a professional setting? Is it the candidate who doesn’t have a penis? I’d say so.”

Nessel replied, “Oh, this is real.”

It was a potent message in an election season that brought a trifecta of Michigan women to state-wide office in 2018: Governor Gretchen Whitmer, Secretary of State Jocelyn Benson, and Attorney General Nessel.

Nessel’s grandparents fled World War II and the Holocaust, arriving penniless in the U.S., where they built a new life in the Detroit area. Nessel grew up in West Bloomfield township on the outskirts of the Motor City, where she attended Reform congregation Temple Kol Ami and was an All-State soccer champ at West Bloomfield High. She went on to earn a BA from the University of Michigan and a JD from Wayne State University Law School.

As an assistant prosecutor in Wayne County, Nessel tried hundreds of cases over ten years, including homicides, armed robberies, carjackings and drug cases, with time on the Police Conduct Review Team and in the Child and Family Abuse Bureau, where she confronted the horrors of child abuse, neglect and sex crimes.

In 2005, Nessel opened her law firm, concentrating on criminal defense, family law, and civil rights. This led her to represent the plaintiffs in DeBoer v. Synder, the landmark suit challenging Michigan’s bans on adoption and same-sex marriage. In 2014, Nessel successfully argued for the plaintiffs, and a U.S. state’s ban on same-sex marriage was overturned for the first time. After the Sixth Circuit Court of Appeals reversed the decision, DeBoer v. Synder was consolidated by the Supreme Court with three other cases in 2015 into Obergefell v. Hodges, in which the Court held, by a 5-4 vote, that a constitutional right to same-sex marriage exists based on the Fourteenth Amendment.

Nessel says that right is now imperiled by the Dobbs decision that overturned Roe v. Wade.

“You cannot extricate these rights from one another. They are a package deal,” Nessel explained. “It’s not just, of course, the right to abortion. It’s the right to birth control. It’s the right to same-sex marriage. It’s the right to intimate acts with same-sex or even opposite-sex partners. It’s the right to interracial marriage. I mean, they’re all part of the same number of rights. And so while it’s all well and good that Justice Alito et al can say, ‘Well, this is just about abortion because this involves a potential life,’ that’s not factually accurate for anyone who has read, honestly, any of these cases at all, who understand how the case law developed over the course of many decades.”

Nessel believes Congress should codify the rights granted in Roe, and in the meantime, states need to take action to guarantee reproductive freedom. On Tuesday, Ballot Proposal 3 will allow Michigan voters to do just that. Yet a vote by Congress, should it change hands, for legislation like Lindsay Graham’s proposal to outlaw abortion nationally after 15 weeks would deny states the opportunity to make their own laws.

“Let’s face it, this is about controlling women’s bodies and revoking what had been for a half-century a fundamental right that we had in this nation. And let’s not pretend that it’s something that it’s not. It’s not about states’ rights, and how do we know? Because in case after case, it depends on what the matter is as to whether you believe it should be a state’s right or not. If it’s a red state, it should be a red state’s right. If it’s a blue state, then not so much.” Nessel added, “It’s mindblowing to me, but if we’ve learned nothing from the likes of the Herschel Walkers of the world, it’s the hypocrisy. You know, rights for me and not for thee.”

As the campaign hurtles to a finish, DePerno’s fellow Trump-endorsed candidates have tacked back to kitchen table issues like crime and inflation, maybe appealing to independent voters. Still, the Republican AG candidate continues to serve up made-for-the-base red meat: “Dana Nessel thinks parents who stand up to her drag queen agenda are domestic terrorists,” DePerno posted last week. The same attack earned chants of “Lock her up!” at a rally over the weekend.

“He refers to me as ‘General Groomer,'” said Nessel. “That’s his nickname for me.”

DePerno’s agenda characterization is based partly on a speech Nessel gave to the Michigan Department of Civil Rights in June. After describing the right-wing’s obsession with children exposed to drag queens as “fake,” Nessel went further, telling her audience, “Drag queens make everything better. Drag queens are fun!” Then she added, taunting: “And you know what I’ll say that was totally not poll-tested? I’d say this: A drag queen for every school.”

Like her provocative 2017 election spot, the drag drag was an irresistible troll, the kind she employs to great effect on Twitter. Asked why she thinks she’s a good fit with the social media platform, Nessel laughs: “Well, I don’t know if my staff thinks it’s a good fit! They probably wish I would delete my account. You know, I’ve just always been a very outspoken person. I do what I say. I say what I mean and I’m pretty blunt. I also have a little bit of a sarcastic sense of humor, which some people appreciate and others don’t,” Nessel said.

“Having been mean-tweeted about by the former president of the United States on a number of occasions, I can tell you what it’s like to incur the wrath of people on this medium, where you have somebody who has that kind of immense power. Unfortunately, it brings a lot of attention to you and perhaps a lot more attention than I ever dreamed of as a first-term state AG from the Midwest.”

Nothing to see here. Just a couple of seditious insurrectionists plotting to overtake our state government wearing matching outfits. Oh Northville. You are better than this. https://t.co/BU8G4XS1z2

If you aren’t willing to have at least 1 shot of Jameson at the Detroit St. Patrick’s Day Parade, you are:

Come at me, people.

For everyone else, Happy St. Patrick’s Day! 🍀 https://t.co/H1Cx6WCoaV

Should Nessel prevail on Tuesday, she terms out in four years, as does the state’s top elected, Governor Whitmer. Is this Nessel’s last run for office – in Michigan or otherwise?

“Oh my God! I can’t even think… I can’t think past November 8 right now. So I guess get back to me later.”

Whatever happens on Election Day, Nessel has a family to return to, one she can take some credit for making possible with her work on DeBoer and Obergefell. She has twin boys who are entering freshmen in college this fall; her wife, Alanna Maguire runs the LGBTQ nonprofit Fair Michigan that the couple started. “She’s my best friend; she’s my biggest supporter. She’s my most trusted confidant,” says Nessel. “And, you know, she’s the best thing that’s ever happened to me.”

The two met when Maguire was recruited as project manager on the DeBoer trial. Nessel proposed on the steps of the U.S. Supreme Court in 2015 amid the Obergefell ruling, and the couple was married in the very same Michigan courtroom, by the very same judge, who ruled in their favor in DeBoer. “I’m very, very proud of that case,” said Nessel. “And I’m very proud of our family.”