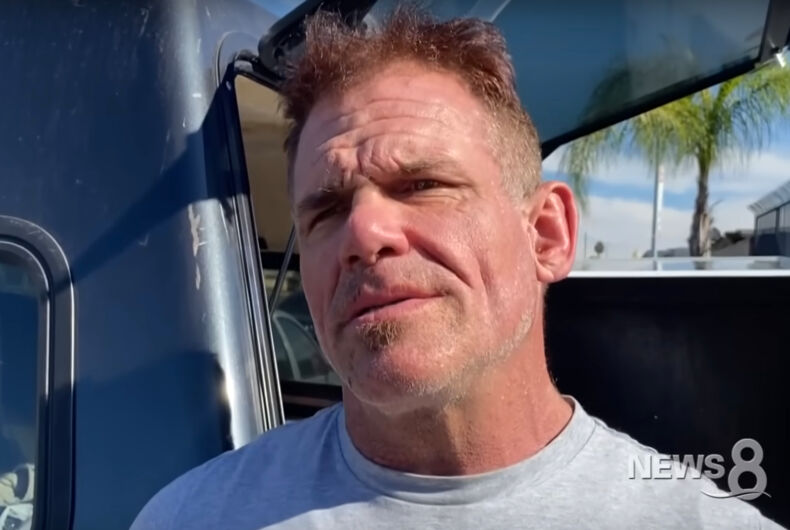 The estranged father of alleged Club Q shooter Anderson Aldrich initially expressed relief that his child is not gay.

In an interview with CBS 8 San Diego, Aaron Brink described a phone call he said he received from Aldrich’s attorney.

“They started telling me about the incident, a shooting,” Brink said. “And then I go on to find out it’s a gay bar. I got scared, ‘Shit, is he gay?’ And he’s not gay, so I said, phew.”

Aldrich – who legally changed names from Nicholas Brink and, according to court documents, identifies as nonbinary and uses they/them pronouns – is accused of opening fire with an assault rifle at Club Q in Colorado Springs, Colorado, killing five people and injuring 18 others.

Brink, a mixed martial arts coach and former adult film actor who has struggled with meth addiction, said that he was told that Aldrich had changed names because Aldrich was embarrassed by Brink’s past, which included an appearance on the A&E reality show Intervention. Brink says that until about six months ago, he thought Aldrich had died by suicide.

The 48-year-old Brink, who says he is sober now but has irreparable damage to his nervous system resulting from meth use, went on to describe himself as a conservative Republican and a Mormon. “We don’t do gay,” Brink said.

Brink said he praised his child for violent behavior from a young age, even encouraging him to assault his ex-wife’s boyfriend.

“I told him it works… You’ll get immediate results,” Brink said.

When asked about what he taught Aldrich about the LGBTQ community, Brink claimed that “gays have been very mean to me. They’re bullies.”

He also praised outgoing California State Assemblymember Randy Voepel (R), who compared the January 6 Capitol insurrection to the Revolutionary War. Multiple media outlets have confirmed that Voepel is Aldrich’s grandfather, though they reportedly did not have a relationship.

However, Brink expressed sympathy for the families of the five victims who died at Club Q.

“I’m sorry for your loss. Life is so fragile and it’s valuable. Those people’s lives were valuable. You know, they’re valuable. They’re good people, probably. It’s not something you kill somebody over. I’m sorry I let my son down.”

Club Q hero speaks for the first time: “When you come out of the closet, come out swinging.”