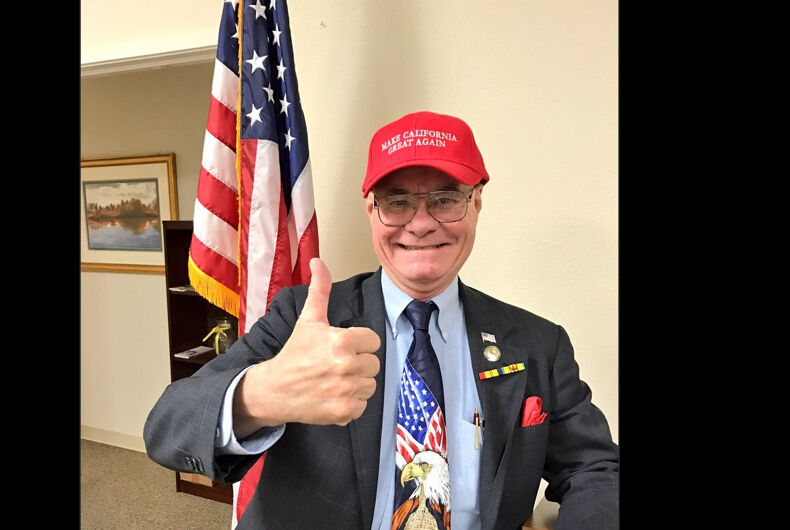 Police have identified the gunman who opened fire at a Colorado gay club on Saturday night, killing five people and injuring at least 25 more, as Anderson Lee Aldrich. Now, Heavy.com and The Denver Gazette have confirmed that the 22-year-old is the grandson of outgoing California Republican State Assemblymember Randy Voepel (R).

Aldrich’s mother, Laura Voepel, has written Facebook posts confirming that the former mayor of Santee, California is her father.

In a January 9, 2021, interview with The San Diego Union-Tribune, Randy Voepel compared the January 6 Capitol insurrection to the Revolutionary War.

“This is Lexington and Concord. First shots fired against tyranny,” Voepel told the paper. “Tyranny will follow in the aftermath of the Biden swear-in on January 20th.”

The comments led to calls for Voepel to be expelled from the California State Assembly. Voepel lost his bid for reelection in the August Republican primary.

According to multiple news outlets, Aldrich was previously arrested in 2021 and charged with five felonies after threatening his mother with a homemade bomb and multiple weapons. The threat resulted in a standoff with police. The New York Times reports that police were unable to find any explosives at the time, and Aldrich was never prosecuted.

Leslie Bowman, who had been renting a spare room to Aldrich’s mother at the time, expressed outrage following Saturday’s mass shooting that he had been allowed access to firearms.

“Why is he not in jail, after that happening?” she said of the 2021 arrest. “After that initial day, police never reached out to me for additional information. I’m a Second Amendment supporter, don’t get me wrong. But for him to be out there, and have access to weapons after that incident, I don’t understand it.”

Laura Voepel had indicated in Facebook posts that Aldrich had been suffering from mental health issues, at one point in February 2022 asking friends to recommend a “trauma/ptsd therapist.”

Authorities are reportedly still investigating Aldrich’s motive in the Club Q attack but said that it is being investigated through the “lens” of a hate crime. As of late Sunday, the Times reported that Aldrich had not spoken to investigators and did not seem to have said anything at the crime scene.

The club was set to host a series of drag shows over the weekend, including an all-ages drag brunch on Sunday to celebrate Transgender Day of Remembrance.

“Club Q is devastated by the senseless attack on our community,” a statement on the club’s Facebook page reads. “Our prayers and thoughts are with all the victims and their families and friends. We thank the quick reactions of heroic customers that subdued the gunman and ended this hate attack.”