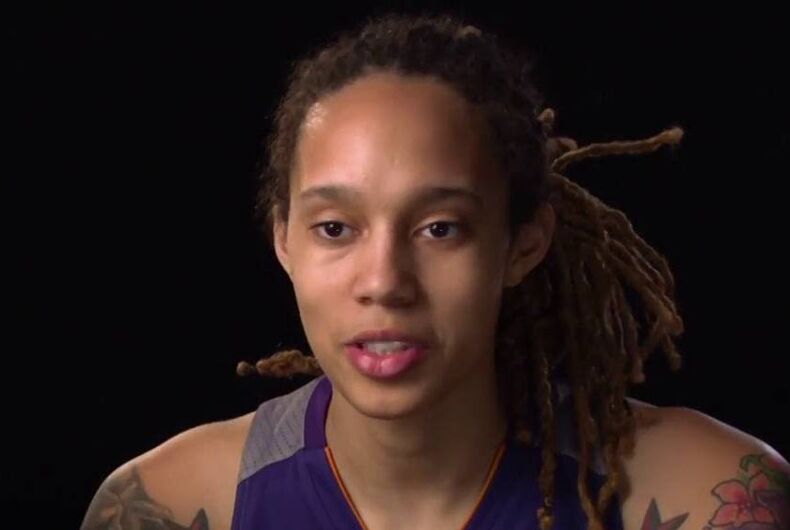 In a Thursday “smoke out” outside the Russian Embassy in Washington, D.C., cannabis activists protested the continued detention of out WNBA star Brittney Griner.

Griner recently lost her appeal and is currently sentenced to nine years in a Russian prison for possessing less than a gram of cannabis oil in two vape cartridges.

The “smoke out” was hosted by DC Marijuana Justice co-founder Adam Eidinger, who told The Washington Post, “Just as it’s unacceptable for Americans to sit behind bars for simple possession of cannabis, it’s absolutely unacceptable for an American sitting in a Russian gulag.”

Eidinger also said Russian President Vladimir Putin is “clearly using an American citizen as a pawn in his war against Ukraine.”

“We want Brittany released and free of the sham charges that Putin imposed on her as his failed invasion of Ukraine backfired and he elevated Russia to the status of most dangerous rogue nation on the planet,” Edinger said in a separate statement, adding that “cannabis is a medical and personal choice for adults in America, no matter the party, gender, religion or race. Putin hates freedom, but that’s exactly what we want to give him, a freedom toke.”

The protest began at 4:20 p.m. and included marijuana smoking and a 51-foot inflatable joint that declared in Russian, “Free Brittney Griner and the Russians from Putin and free 420 prisoners.”

We’re outside the Russian Embassy with our 51 ft joint that reads in Russian #freebrittneygriner and the Russians from Putin & #free420prisoners pic.twitter.com/HiHJHaldZp

“If you have used vape cartridges, bring them!” the organization tweeted when promoting the event.

Griner has been in Russian custody since February, when she was arrested for marijuana possession at Moscow’s Sheremetyevo airport. She pled guilty but said in court that she accidentally packed the two vape cartridges before her flight. Her legal team also offered written statements saying her cannabis was prescribed to treat her chronic pain.

A Russian court sentenced her to nine years in prison. Her trial has been regarded by many observers as an attack on the U.S. for its opposition to the invasion of Ukraine. The ruling wasn’t surprising to many since defendants rarely get acquitted in Russia, and now, her appeal has been rejected too.

Griner’s lawyers told the AP that they think “the punishment is excessive and contradicts the existing court practice.”

They said Griner’s “biggest fear is that she is not exchanged and will have to serve the whole sentence in Russia.”

The Biden Administration has offered to free Viktor Bout, a Russian arms dealer serving a 25-year prison sentence in the United States, if Russia frees both Griner and another American, Paul Whelan, who has been wrongfully detained in Russia for espionage for the past four years.

Biden said his administration is in “constant contact” with Russian authorities and that “we’re not stopping,” though the U.S. has reportedly seen little movement from Russia on its proposal.

President Joe Biden NBC News reported that it would not result in anyone being released from prison, as most convictions for simple marijuana possession take place at the state level.

As part of his announcement, Biden also called on governors to pardon simple marijuana possessions at the state level.

The queer zine that brought “dykedom” to the forefront in India