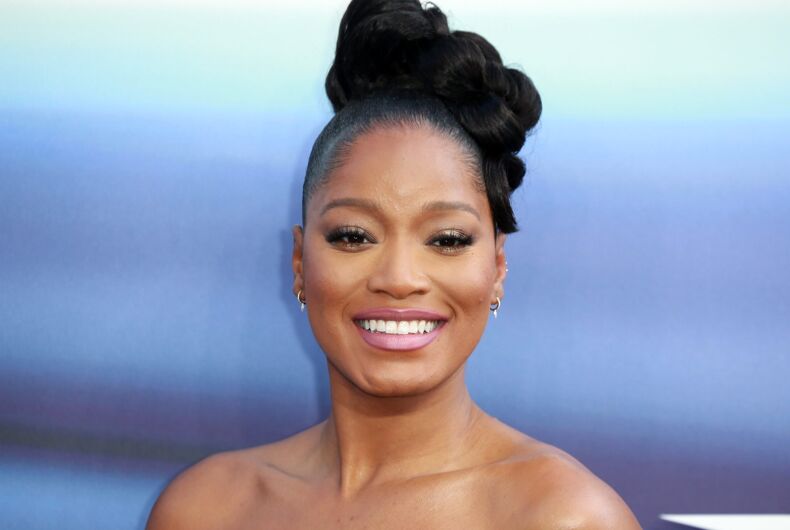 Actress Keke Palmer opened up about her sexuality during a recent podcast appearance, explaining that she is “definitely in the middle of the scale.”

During a conversation on the podcast, WHOREible Decisions, Palmer said she has not been in a relationship with a woman but “I’m definitely even across the board.”

“I feel like love is love, life is life,” she said.

If a woman were to hit on her, she added, she’d want her to “do it with touch.”

“I’m cool with if a girl is making a move and she is trying to get me into the vibe. I’m cool with her being like ‘stop‘ and hugging me for no reason because I’m like ‘I know what that means, you held my hand a little bit too long.’ With girls, that’s a level of aggression I’m cool with.”

Palmer recently played the character of Izzy in Pixar’s Lightyear, which features a same-sex kiss that got the film banned in 14 countries. In June, Palmer told Newsweek that she thought kids would love the LGBTQ inclusion in the film.

“Young kids today and the kids that will be coming after them, just to have this in the atmosphere, it just continues to normalize what’s always been there,” she said. “And it just shows the representation of what our world has always looked like.”

She also praised the inclusion of women of color in the film.

Palmer – who became famous playing the titular character in Akeelah and the Bee as a child actress in 2006 – has been out for a long time, but it seems people keep forgetting she is part of the queer community.

Popular queer site Autostraddle recently pointed out that every time they write about Palmer, someone writes in the comments, ‘”omg I didn’t know Keke was queer!”‘

In reality, she has been open about her sexuality for years, after coming out as fluid in a 2015 music video for her song, “I Don’t Belong to You.” In 2019, she spoke to Pride Source about coming out.

“So, I didn’t feel like I needed someone to look to in order to be comfortable with that, but at the same time I think it was more so being comfortable with myself as opposed to me looking outwardly for comfort. It was just kind of me saying, ‘OK, it’s not a big deal; this is who I am and I can be who I wanna be and date who I wanna date,’ and it was just being more relaxed about all of that.”

Techno & lust in wartime Kyiv: No photos. No prejudice.