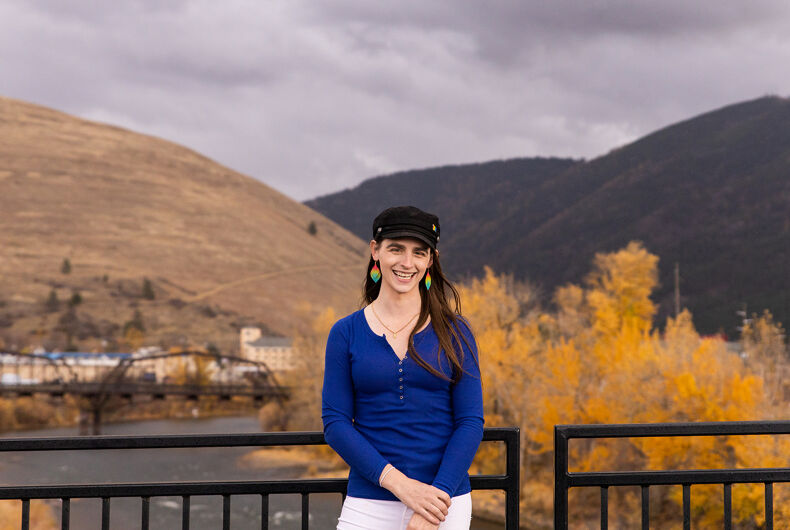 On election day, Zooey Zephyr became the first out trans person ever elected to the Montana legislature – and the trailblazing moment is already inspiring people.

Zephyr tweeted about a heartwarming interaction she had with a flight attendant while she was getting off a plane yesterday.

“As I was getting off the plane last night, a stewardess asked what I was so excited about. I told her I’d won my election & was the first trans woman elected in Montana,” Zephyr wrote.

“She immediately teared up. ‘My son is trans,’ she said, & began to tell me about all the joys/fears that had come with his transition. How much happier and healthier he is now. I got to see pictures of her & her son in Paris, the two of them beaming with joy.”

“She also talked about how scary the world was, but how this moment gave her hope. Then we took a selfie & cried.”

Zephyr used the moment to advocate for trans rights and show that people care about the trans community.

“This is why we’ll win the fight for trans rights. Because we’re not a concept to be debated. We’re your family, your neighbors, your colleagues, & more. & if you don’t think you know us, rest assured—even 30,000′ in the sky—you’re never far from someone who cares about us.”

Zephyr decided to run for office after testifying before the Montana legislature against an anti-trans sports bill.

Currently pinned to the top of her Twitter profile is a screenshot of one of her old tweets in which she declares, “We need trans representation in the Montana gov’t. I’m filled with a mix of fear/rage about what Montana’s doing to me & my community, & a burning drive to fight against it!”

“Next year, I’m gonna run for office in the Montana legislature.”

The screenshot is positioned beside a photo of the election day vote counts that show Zephyr coming out on top.

“How it started…how it’s going,” Zephyr tweeted above the two photos.

Actress Keke Palmer opens up about her sexual fluidity: “Love is love, life is life.”