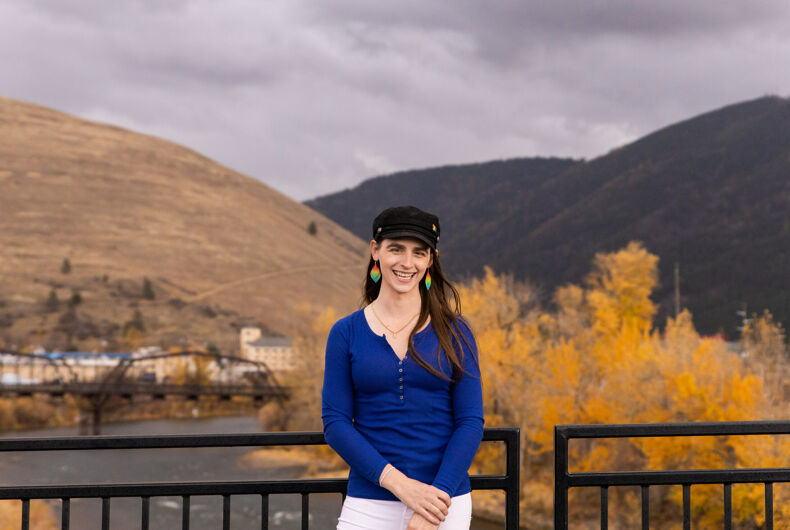 After testifying before the Montana legislature against an anti-trans sports bill, Zooey Zephyr decided to run for office.

“Asking the people in that room to see your humanity and to care about the issues that were hurting your community — and to have to speak to a legislature that did not want to listen when it came to human rights — was hard,” she told LGBTQ Nation.

Related: Kansas GOP targets LGBTQ politicians in redistricting battle so we don’t have a voice in government

The anti-trans sports bill ultimately passed in 2021, along with several other pieces of anti-trans and anti-LGBTQ legislation in the state. Zephyr realized that if she wanted to change the conversation, she had to become a legislative voice in that room.

Now, she is running for the Montana House and could become the first out trans person ever elected to the state’s legislature.

“The core fire at the center of my heart is my trans community, my queer community,” she said, “and seeing the way the legislature was harming them, from the trans sports ban to attempted bans on healthcare for trans youth to [limitations on] updating your birth certificate… If we don’t have people in the room trying to stop it, we’ll never be able to move the needle on this stuff.”

Please pay attention. Texas is stealing trans kids away from their parents. Trans lives are in immediate danger.

We've been sounding the alarm. Every law—from sports/bathroom bans to healthcare bans—leads here: to the erasure & murder of my community. Their goal is genocide. https://t.co/bpQUfA7GFO

Zephyr, who is running in the 100th district, emphasized that all human rights — from LGBTQ rights to reproductive rights to voting rights — remain at the center of her fight. She is also passionate about fighting for healthcare and affordable housing.

“Affordable housing is the number one issue the people in my district are talking about,” she said. “Nearly every person I talk to on the doors, the first words out of their mouth are, ‘affordable housing.'”

To Zephyr, fighting for affordable housing means ensuring that anyone who works in a community is also able to live there, and that they are not being squeezed out by exorbitant rent hikes or property taxes. She also wants to regulate the influx of homes being purchased to be used exclusively as Airbnbs, which she says is making it more difficult for locals to buy homes.

When it comes to health care, Zephyr is focused on Medicaid expansion, keeping trans and reproductive health care legal, and increasing health care access to people in rural communities, which means everything from having more OBGYNs in rural hospitals to improving public transportation between rural areas and big cities.

Taking a conscious step back from all my rage & grief to acknowledge:

1) Transitioning is the best decision I've ever made.

2) Despite the world's cruelty, there are trans folks who are out & thriving in our lives.

To celebrate, here are 4 pics of me that bring me #transjoy pic.twitter.com/MNTy1sXr15

Zephyr currently works as a public employee in the Office of the Provost at the University of Montana, where she is also pursuing a double masters degree in creative writing and literature.

Also engaged in activist work, she has been working with the city of Missoula to update its nondiscrimination ordinance to make it easier for victims of discrimination to report their experiences.

“We’re seeing a lot of underreporting…[and we wanted] to make sure the people who are discriminated against have access to the bureaucratic processes you need to go through to access justice.” The new version of the law should be up for a final vote this spring, Zephyr said.

For Zephyr, it’s important that voters know that she, herself, has experienced many of the issues she is fighting to fix.

“It matters to elect people to office who have firsthand experience dealing with the kinds of things that are primary issues in your community… It matters to have someone [like me] who has been a renter their whole life, who is fighting to get into the market and sees that it’s increasingly inaccessible. It matters, when you talk about health care, to have someone who relies on health care for her quality of life.”

As someone who rides the bus everywhere (work, laundry, groceries, etc.), this is amazing news.

Also, very, VERY excited for the expanded service come summer. Maybe I'll even be able to bus home after a night on the town👀 https://t.co/mYN3qkTrjz

Becoming the first trans person in the state legislature would be an incredible milestone, she said, because it means more marginalized people would have someone fighting for them.

“It’s really just about having a voice from our community in a room where that voice hasn’t been heard… To get in the legislature would be a chance to more proactively help the people in my community, people in my district, and trans folks across the state.”