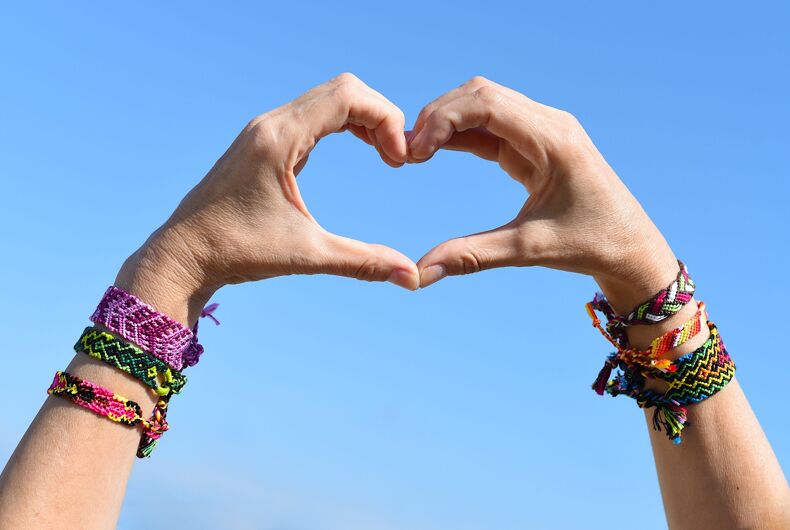 Teddie Bernard, a cartoonist and zine maker based in Chicago, uses their zines as a space to imagine. Currently, they’re working on a series of mid-century detective comic books that feature gay, trans or gender non-conforming characters. Some of their zines are folded or bound by hand, while others are stapled together. Bernard prints all their own work as well.

“There’s freedom in zine-making that I wouldn’t have working with a mainstream publisher,” Bernard told LGBTQ Nation. “I’m working on stuff that gets into aspects of my queer identity that I don’t think the mainstream wants to talk about.”

Bernard also attends zine festivals and meets other zine makers like themselves to trade work with. He said that the community aspect to zines is “intrinsic” to the art form.

Zines not only uphold queer history and culture, but queer love and community as well. At their core, zines are tools for self-expression, documentation and art. They allow their creators to explore in ways that aren’t restricted by mainstream  presses. For queer people, zines are—and always have been—freedom.

Short for “magazine” or “fan-zine,” zines are small-circulated publications. They’re an anti-capitalist practice of sorts, as they’re usually self-published and handmade—whether folded together, glued or stapled. They include all sorts of work, like doodles, comics, recipes, classified ads for friends and partners, creative writing and even resources for HIV testing, underground parties and other community events. They archive queer culture and have historically helped queer people, especially those of color, find communities rooted in safety, trust and joy.

For example, in the ‘80s, when the HIV/AIDS epidemic surfaced, queer people used zines, such as ACT UP and gendertrash to take care of each other and do the work that the government failed to do for them. LGBTQ people plastered homemade pamphlets and publications with chronicles of recent events and legislative actions or protests, places to get one’s status checked, guides to safe sex, and stories decriminalizing the virus. In fact, What Would an HIV Doula Do is an organization that continues to publish work and provide support as a response to the ongoing AIDS Crisis.

“We are talking about communities that have severe information needs being completely left out of mainstream media for so much of human history and not being served by information that they need,” said Sarah Bennett, a communications and media studies professor at Santa Ana College, who has self-published dozens of zines.

Bennett added that zines are “all about rebellion.”

“To put queer stories into physical piece of paper and make them permanent was a big deal at that time,” she said.

The subversive quality of zines is undeniable, particularly during periods of time when it was dangerous for LGBTQ people to come out and freely engage with their gender identity and/or sexuality.

Shakti Khabar hailed from a lesbian collective in the ‘90s and carved out space for South Asian lesbians to share their stories. Onyx: Black Lesbian Newsletter was published in San Francisco throughout the early ‘80s and contained articles, poems, art, and photographs that focused on Black lesbian life and culture. Conditions: a feminist magazine of writing by women with a particular emphasis on writing by lesbians came out of Brooklyn and was dedicated to publishing the work of lesbians, particularly those that were of color or working-class, from the late ‘70s to early ‘90s.

Homeboy Beautiful was created in 1978 and chronicled queer Latinx communities in East Los Angeles. It published advice letters from “Ask Lil Loca” as well as exposés from “homo homeboys” and fashion tips. FaT GiRL: A zine for Fat Dykes and the Women Who Want Them was just that. The zine had art and musings like “Confessions of a Fat Sex Worker,” “What do you want from your non-fat allies” and “Fat Girl is a political act.”

When it was unsafe for queer people to publicly seek partnership, the classified ads section in zines helped them find each other as well.

“Classified ads in the backs of publications allowed people to find other queer people like themselves for romantic and sexual relationships,” said Elena Gross, the co-director of the Berkeley Art Center and co-editor of OutWrite: The Speeches That Shaped LGBTQ Literary Culture. “Zines were vital in bringing people across different divides and distances together.”

Zines are also an accessible alternative for those who want to publish their work but don’t have the connections or means to do so at larger printing presses. They’re inexpensive to make and are free from any rules or limitations. In other words, anyone can make a zine.

“Zine-making and print culture happens outside of mainstream publications and alongside—but still outside—academia,” Gross said. “This is important in terms of having a more accessible entry point. Zines aren’t super jargon-y. They meet people at an egalitarian level, rather than one that’s informed by the bureaucracy or an academic hierarchy.”

Gross added that because the majority of queer literary production in the late ‘80s and early ‘90s was done outside of major printing presses and publications, a subculture of queer writers formed.

“They wanted to find community and engage with each other not just around the written word, but politics and activism as well. Zines have always been a really important space for being able to present challenging, daring work that’s critical of the establishment and status quo in a space that allows for experimentation and individuality.”

Today, zines continue to be outlets for community building, education and self-exploration.

Jireh Deng, a poet and journalist based in Long Beach, CA., creates chapbooks of their poetry. They frequently exchange them, as well as other zines and print publications, with their friends or people they meet at readings and other community events.

“Chapbooks are a great way for poets to get their work out there,” they said. “As a zine maker, I own my own work. I’m the means of production, I’m the one selling them. When I sell a chapbook, I know that I’m giving a piece of myself for someone else to hold.”

For Deng, zine making is empowerment.

“I like having agency over my storytelling,” they said. “Zines are like little windows into how marginalized communities are creating narratives and creating or thinking outside of what academic institutions are doing to ‘study’ our communities. It’s a powerful thing.”

The zine tradition is not going away any time soon. In fact it’s as strong as ever with the rise of community events, library archives, zine distributions and hyperlocal zine fests, like Black Girl Book Fair, Bay Area Queer Zine Fest, Queer Zest Zine Fest, just to name a few.

“It’s important to hold specific fests for specific spaces,” Bennett said. “Zines are worthy of their own festivals that celebrate everyone individually. That’s the spirit of zines—it’s what they’re all about. I want to see more of that.”