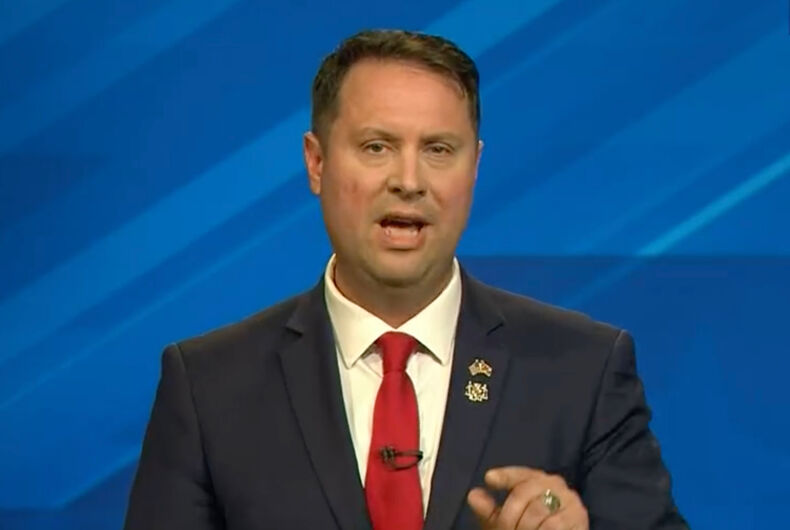 During a debate with Democrat Wes Moore Wednesday night at Morgan State University in Baltimore, Cox was asked about supporting LGBTQ students in Maryland schools.

“We know that young people who identify as LGBTQ face a lot of challenges. Do you believe these children are being adequately supported in our public schools, and are public schools doing a good enough job educating the whole student body about LGBTQ issues?” asked Baltimore Banner reporter Pamela Wood.

“No, we’re not doing enough because too many times we exclude the parents from involvement,” Cox responded. “I fought against a bill that would literally allow 12-year-olds to receive counseling without their parents even knowing. That’s wrong. We need to make sure parents are involved.”

“What I will do also is ensure that the indoctrination stops,” Cox continued, citing no evidence of such indoctrination. “We cannot have transgender indoctrination in kindergarten. I mean, that’s preposterous. That’s exactly what my opponent supports. It’s on his website. I will stand against that and eradicate that from the curriculum and get back to world-class learning.”

Wood followed up, asking Cox to clarify what he meant by “indoctrination.”

The candidate cited asexual and nonbinary author Maia Kobabe’s memoirs Gender Queer, which he claimed depicts “things that I cannot show you on television, it’s so disgusting.” Kobabe’s book is not being taught in any kindergarten or elementary school classes.

Wood then directed the question to Moore, who said that these issues should be addressed at the local level.

“All I ever want for my children is for them to be seen and for them to feel like they are being heard and I want the same thing for every child,” Moore said.

Noting statistics on the accelerated rate of LGBTQ youth homelessness in Maryland and that 80 percent of transgender people in the state have contemplated suicide, Moore pledged his support for the LGBTQ community. “I want to say to all of our LGBTQ youth and families: I see you and I hear you and all policies that will be made will be made in partnership because that is how we have to lead as a state, in partnership.”

Ahead of November’s general election, polling indicates Moore has a significant lead over Cox. A Goucher College poll from early September showed the Democrat up by 22 points. Later in the month, a Washington Post-University of Maryland poll showed Moore leading the Trump-endorsed Cox by 32 points.

How zines became a beacon of queer love & community