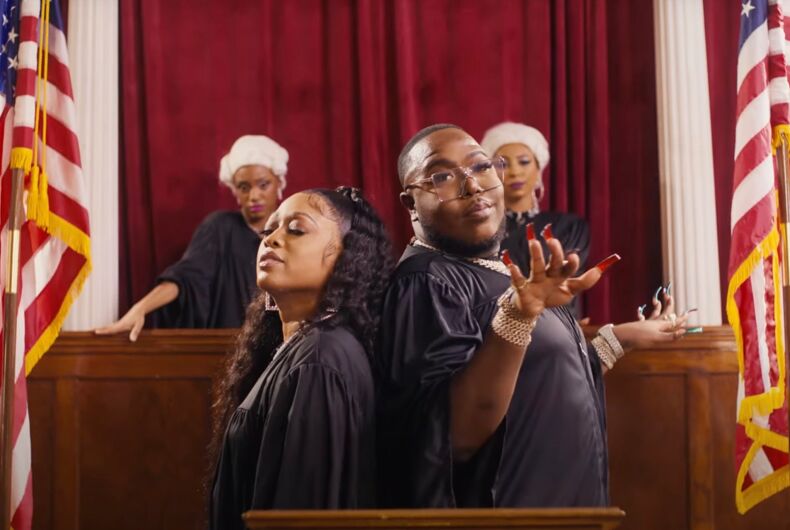 In partnership with the dating app BLK, the rappers Saucy Santana and Trina have released a music video encouraging Black voters to get to the polls and vote in the upcoming midterm elections on November 8.

The video is called “No Voting, No Vucking” and communicates to people using the app that if they meet a prospective partner who isn’t planning to vote, that’s a deal breaker.

The video opens with Saucy Santana proclaiming, “He got mad jokes, he don’t seem broke, the only red flag – he said he don’t vote.”

BLK is the largest dating app for Black singles, according to a press release. As such, the video’s influence could be widespread, as a study the company conducted found that more than 50% of its users do not know the date of the midterms, despite 80% being registered to vote.

“I’m honored to use my platform to empower young people because not voting is definitely a red flag in a relationship. Period,” said Saucy Santana. “Now, more than ever, we have to use our voices to stand up for what we believe in. Voting is sexy. Being informed is sexy.”

BLK also created an in-app Election Center that, as the press release explains, is “designed to shift the culture of voting and politics in the Black community, amplify the voices of Black voters, and drive Black voter registrations.”

The app will also allow members to match based on policy issues they care about.

“We couldn’t be more excited to announce this collaboration with two of the most trailblazing figures in hip-hop and culture,” said BLK’s head of brand and marketing Jonathan Kirkland.

“Our users are inspired by Trina’s confidence and her powerful female-first lyrics, while Saucy Santana’s fervent and self-assured lyrics have broken barriers of inclusivity in the hip-hop community. With these two cultural icons, we hope to empower a new generation of young voters to get involved in this and future elections.”

Voters can also visit novotingnovucking.com for more information on how to make it to the polls. The campaign also acknowledges the harsh voting laws that continue to disenfranchise Black voters.

“Studies show that many voters from communities of color use early voting and mail-in ballots,” the website says. “However, politicians continue to draft bills increasing the difficulty for Black Americans to do just that.  In 2021, nineteen states passed 34 laws reducing polling place availability and raising stricter requirements.”

​”Whether it’s finding love or registering to vote, you have to put yourself out there to get what you want AND deserve.  The ballot box is no different.  Show up for yourself and your community in this year’s election.”