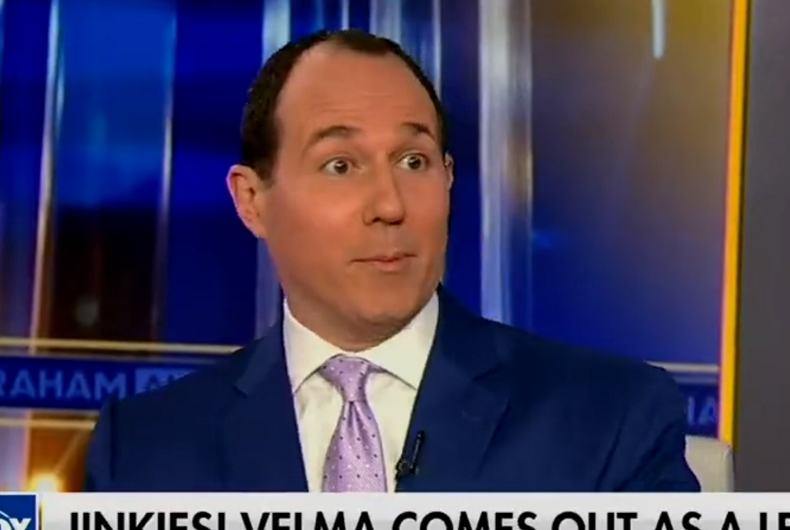 Raymond Arroyo is offended that Velma likes a girlPhoto: Screenshot

Velma has a crush on a woman in the latest Scooby Doo movie that was released for digital download earlier this week, and one Fox News host is not taking it well, comparing homosexuality to bestiality.

“This is kind of really offensive on the level that we’re disrupting these beloved characters,” said Christian author Raymond Arroyo on The Ingraham Angle last night. “I’m waiting for them to tell us that Scooby and Shaggy shared more than a Scooby Snack in that Mystery Mobile.”

Laura Ingraham – not one to be outdone when it comes to outrage – made Arroyo’s sexual innuendo explicit: “They shaggied up, or shacked up.”

“What other beloved characters are they going to sexualize next?” Arroyo bellowed.

“This is kind of really offensive on the level that we’re disrupting these beloved characters.. I’m waiting for them to tell us that Scooby and Shaggy shared more than a Scooby Snack” pic.twitter.com/3rcQHTodQw

“Sexualize” is a word that conservatives have been using this past year to refer to any mention of LGBTQ people. Heterosexuality has been ubiquitous in children’s cartoons for decades; even Scooby Doo‘s Fred and Daphne were portrayed as dating in some of the franchise’s movies. But when a character dates or has a crush on someone of the same sex, many conservatives describe it as inherently sexual even if there is no mention of sexual activity.

Later in the segment, Arroyo compared Velma having a crush on a woman to being a serial killer. He then said that she is not canonically gay – even though she is portrayed as queer in the latest official film from the franchise – because Hanna-Barbera didn’t intend for her to be gay when the show was first created in 1969.

“I never was into Scooby Doo,” Ingraham admitted, raising the question of why she devoted a segment to Velma’s crush on a woman.

imagine being a 52 year old adult and going on tv to say this. touch grass pic.twitter.com/GnFZwm2WXD

The scenes Ingraham and Arroyo were discussing were from Trick or Treat Scooby-Doo! which was available for digital downloads in some markets starting this past Tuesday.

In one scene, Velma meets a character named Coco and instantly develops a crush on her, noting her positive traits like “incredible glasses,” “obviously brilliant,” and “loves animals.” Velma’s glasses fog up – as is the norm for cartoon nerds who fall in love – and she says her catchphrase, “Jinkies.”

In another scene being shared online, Coco refers to Velma as “the cute one,” much to Velma’s delight.

this my fave scene of her !! pic.twitter.com/V07OfY1nsS

Velma’s identity has been the subject of innuendo in the Scooby-verse for decades. James Gunn, who wrote the 2002 live-action Scooby Doo movie, said that his Velma was “explicitly gay” in the original script “but the studio just kept watering it down & watering it down, becoming ambiguous (the version shot), then nothing (the released version) & finally having a boyfriend (the sequel).”

In 2020, the creator of the 2010 animated series Scooby Doo: Mystery Incorporated Tony Cervone posted a Pride picture of Velma with the character Marcie Fleach.

Trick or Treat Scooby-Doo! will air on the Cartoon Network on October 14 and be available on DVD on October 18.