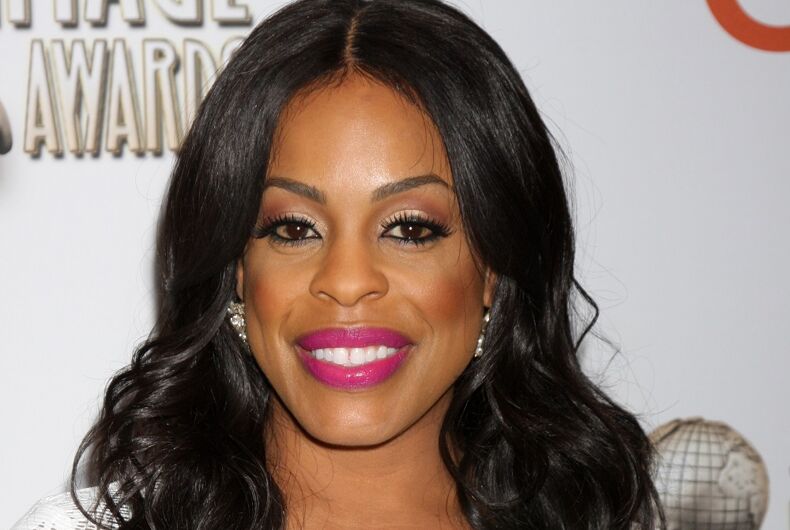 In 2020, Niecy Nash – an Emmy Award-winner who is best known for her roles on Reno 911!, Getting On, Selma, and Claws, as well as for hosting the interior design show Clean House – came out in an Instagram post that also announced her marriage to Jessica Betts.

Since then, Nash has spoken about not labeling her sexuality as anything other than someone who is in love with Betts.

Nash affirmed that sentiment again during a recent appearance on the Tamron Hall Show, where she told a story about her daughter pressuring her to label herself.

“She was like, ‘No, you got to know mom,’ and she made me watch a show all about all the labels and all the names, and after it was over, my head was spinning.”

“She was like, ‘Okay so which one are you?’ I was like, ‘Girl I’m more confused now than I was before this. I don’t know.’ I said, ‘If I have to coin it in the moment, I would say I’m Jess-sexual.’ Because I don’t know I’ve never looked at anyone, male or female, and seen them the way I see her. So I don’t know but right now I know I’m happy. I said, ‘Write that down.”‘

In February, Nash and Betts made history for becoming the first gay couple on the cover of Essence magazine.

In the Essence story, Nash spoke about her deep love for Betts, and again discussed how she doesn’t label her sexuality.

“The least of my attraction is gender. What I was and am still attracted to is Jessica’s soul. She was the most beautiful soul I had ever met in my life. Now that I’ve experienced it, I can’t imagine going through life without it.”

The article described them as “into each other in a way that you rarely see in couples after high school.”

“We’re extremely compatible.” Nash said. “Sometimes you can be attracted to somebody but don’t have a lot in common. But we have such a natural compatibility that we can be around each other, work together and hang out all day. If there was a 25th hour, we would be right up in it.”

A letter to my young European friend who smokes