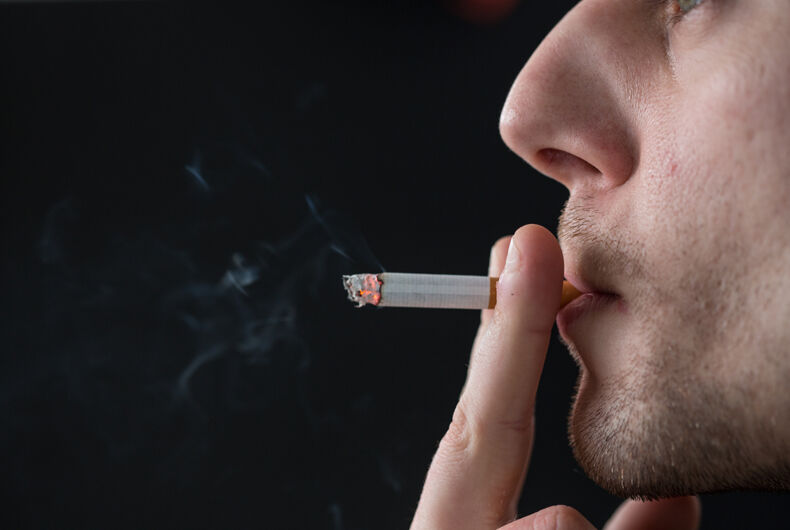 Cigarettes killed both my parents. They were chain-smokers, and they died tragic, miserable deaths years before they should have died.

This has sometimes made my husband and my travels throughout Europe a bit difficult. It’s not just that more people smoke here than in America; it’s that smoking is so much more accepted.

Back in America, decades of education campaigns have made smoking unpopular, at least among many in the professional classes.

But in most of Europe, it’s generally still “cool” to smoke. Sadly, in America, LGBTQ folks also smoke at higher rates than heterosexuals.

We spent most of this year traveling around the Balkans, living for months at a time in Croatia, Greece, Bosnia and Herzegovina, Serbia, and North Macedonia.

As we’ve traveled, I’ve gotten to know a number of these smokers very well, including some young people, both gay and straight.

It always breaks my heart a little.

And sometimes, even though it’s absolutely none of my business, I’ve ended up telling these friends what I think about their habit — as gently and as tactfully as I know how.

Here’s an email I wrote to one young French friend I’ll call Luc.

Just wanted to say how much I enjoyed getting to know you over the past several weeks. Sometimes I look at the world — the way we are trashing the planet, the income inequality, the wars — and I worry there isn’t much of a future.

Then I meet a young person like you, who is so smart and passionate, and it truly restores my faith in the future.

Speaking of which, because I do like you and think you are a great guy with a great future, I’m now going to be rather annoying and give you some advice which you didn’t ask for.

Here goes: I think you should try to quit smoking.

Both of my parents were lifelong smokers. And each died much younger than they should have. They started smoking when they were 18 and 19, and as I grew up, they tried to quit many times.

But it was too much for them. The longer you smoke, the harder it is to quit. Which is exactly why the cigarette companies work so hard to get young people like yourself to start smoking.

Here is how my parents died.

My mother went to a parking garage for a smoking break where she suffered a massive coronary brought on by decades of smoking. She was completely alone, and when her heart stopped, she fell straight forward onto her face, splitting her lips and breaking her teeth and nose.

Her heart wasn’t beating for several minutes — technically, she was dead — but paramedics revived her. Unfortunately, she was brain-dead by then, and two days later, it fell to me to have her life support removed. That wasn’t a fun decision to make. And it was even less fun to stand there and watch her die.

She was only sixty-two.

The same thing happened a few years later with my father, except he died from something called chronic obstructive pulmonary disorder. Basically, his lungs were so badly damaged, they couldn’t provide enough oxygen to keep him alive. So for twenty-four hours, my brother and I sat with him in the hospital, watching him slowly suffocate to death. It looked like an equally miserable way to die.

Brent’s dad, who never smoked, is still alive and kicking at age ninety-three.

But my parents’ final days weren’t even the worst of it.

In the years before my mom died, she would get winded walking a single block. She was only a few years older than I am now, but she could barely climb a set of steps. I was shocked by how slowly she had to move and how often she had to sit down to rest — how incredibly limited her life had become.

My dad spent the last few years of his life carrying around an oxygen tank with tubes jammed up his nose. Even then, he continued to smoke — despite how dangerous it is to smoke with an oxygen tank. Doctors pleaded with him to stop, and he almost got tossed out of several retirement homes for smoking while on oxygen.

At that point, it was simply impossible for him to quit.

Oh, and my parents both died completely broke — they had no retirement savings — in large part because of the tens of thousands of dollars they spent on cigarettes. After my mom died, my father quickly lost the house to foreclosure. A few years later, he was evicted from even his very cheap apartment. Despite help from my brother and me, he spent his last few years on social assistance in some pretty unhappy living situations.

I can’t help but wonder how things might have been different if my parents hadn’t spent all that money on their addictions.

Luc, one of the things I most admire about you is how passionate you are about the oceans, and all of the plastic and toxic chemicals we’re dumping into them. It’s literally choking our seas.

Am I over-stepping to say that it feels to me like you’re poisoning your body in exactly the same way? That you’re choking yourself? The next time you’re online, take a look at a set of healthy lungs compared to the lungs of a smoker.

Cigarette companies — and their advertising agencies — don’t care about you. They’re just like all those selfish people and companies dumping all that garbage into our oceans.

As I said, many times, my parents tried to quit, but by then, it was too late. At that point, they were too old to change.

Okay, I’ve said what I have to say, and I promise I’ll never say another word to you on this topic. And, of course, no matter what you decide, I will still consider you a great person and a good friend.

I hope our paths cross many times in the years ahead.

After I sent the email, Luc wrote me back to tell me how much he appreciated that I cared enough to send it. He promised that he would try very hard to quit. At the same time, he explained why he had started smoking in the first place — how the practice had replaced some addictions that were actually much more dangerous than cigarettes. The truth was, he was now in a much healthier place than he had once been.

It’s often a similar story with LGBTQ folks, some of whom take up smoking in order to deal with the stresses of being queer. And the LGBTQ community is aggressively targeted by tobacco companies, who in the past have sponsored Pride and other LGBTQ events. This sort of advertising has led young queer folks to smoke at rates twice as their straight contemporaries, while 20.6% of all LGBTQ adults still smoke.

Luc’s response to my message was a nice reminder for me: how everyone’s path in life is different, and we’re almost always better off reserving judgment as much as possible for as long as possible.

In the end, Luc’s story is his own to tell — and live.

But I was encouraged by this experience, and since then, I have shared variations on this email with other younger smoker-friends.

Am I doing the right thing? Sometimes I still wonder if I’m crossing a line.

That said, so far, two friends have later told me they finally did give up cigarettes, in large part because of these things I said.