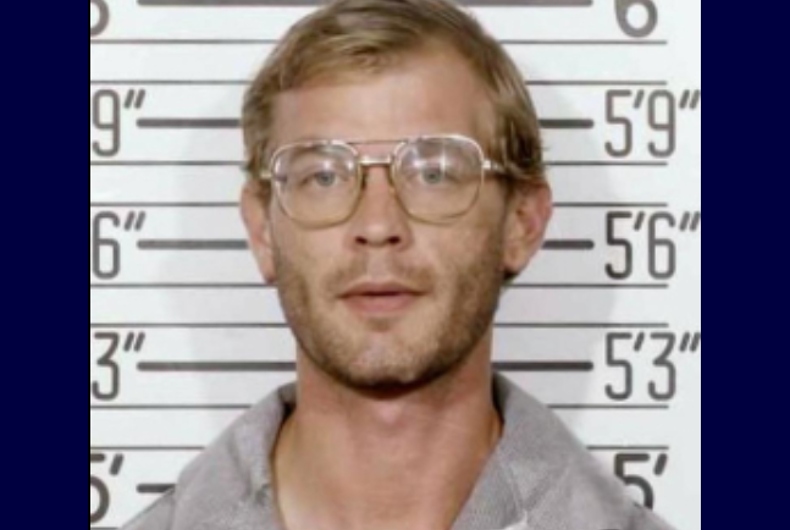 In light of the popular new Netflix series, Monster: The Jeffrey Dahmer Story, interest in the vicious serial killer has risen dramatically, so much so that LGBTQ bars in the Milwaukee area – where Dahmer met most of his victims – have had to explicitly ban Dahmer Halloween costumes out of respect for his victims and their families.

Between 1978 and 1991, Dahmer, also known as the Milwaukee Cannibal or the Milwaukee Monster, murdered and dismembered 17 people, most of whom were gay men of color who he had met at Milwaukee gay bars.

The gruesome murders and the failure of police to bring Dahmer to justice due to racism and homophobia is the subject of the recent Ryan Murphy-produced series.

Two bars, “This is It” and “D.I.X.,” posted on Facebook alerting customers they’d be turned away if they showed up dressed as Dahmer.

“In solidarity, with our other queer establishments, this Halloween weekend, we reserve the right to refuse access to anyone wearing hateful, racist, and otherwise disrespectful costume choices,” said “This Is It” in a Facebook post at the start of the weekend. “This includes anyone dressed as Dahmer.”

A statement from the bar to WISN 12 News explained, “Even though Dahmer was not a customer at This is It!, the bar has been getting phone calls ever since the Netflix series aired because we are the oldest LGBTQ+ bar in Milwaukee, and in the Midwest. This, coupled with the popularity of the series and people on social media toying with the idea that somehow dressing up like this evil person would be a good idea, led the bar to make a statement that such hateful and disrespectful costumes will not be allowed in our space.”

Eric Hamilton, a manager at D.I.X, added that those who were not alive during Dahmer’s killing spree “may not understand the severity of how it affected the community.”

Hamilton emphasized that the policy is “out of respect.”

“We’re not here to tell you what’s appropriate or get authoritarian on you, but at the end of the day, we will politely ask you that you either remove part of your costume so it will not affect anyone, or politely tell you to go to another bar.”

eBay also has reportedly banned the sale of Dahmer costumes this year, saying the getups violate the company’s “Violence and Violent Criminal Policy.”

The new Netflix series has been criticized for romanticizing the infamous serial killer, and the families of some of Dahmer’s victims have spoken out about feeling exploited and retraumatized by the series.

Despite the series’ purported focus on the homophobia and racism that prevented authorities from stopping Dahmer sooner, critics have noted that casting Evan Peters, who has become something of a sex symbol for his roles in other Murphy productions, in the lead role glamorizes the killer.

Netflix also removed the “LGBTQ+” tag from the series after backlash.

“This is not the representation we’re looking for,” one TikTok user said in a post.