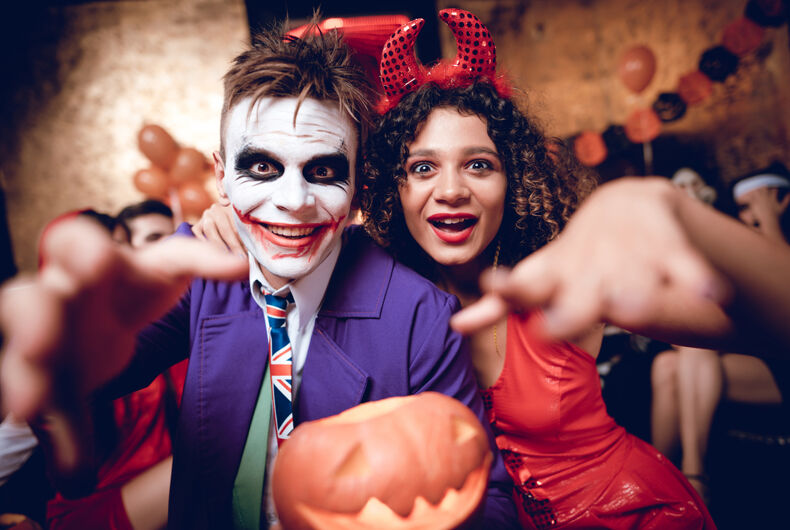 It’s Halloween, right now, as we speak! But that obviously didn’t stop everyone from dressing up—and in many gay instances, stripping down—for parties and masquerades over the weekend. There are sure to be more fabulous picks of costumed celebrities hitting the internet after tonight’s festivities, but for now, we’re spotlighting all the best LGBTQ celebrity costumes we’ve seen so far!

Forget the candy, Neil Patrick Harris and fam are apparently making the case for fast food as the new Halloween cuisine. The Uncoupled star posed as (a very roughed-up looking) Ronald McDonald alongside husband David Burtka as the Burger King king, with the couple’s kids dressed as Wendy’s mascot Wendy and KFC’s the Colonel.

Jojo Siwa showed off her Draco Malfoy look, complete with a lip sync to the character’s intro from the first Harry Potter movie. (Acknowledgement of Harry Potter fandom is in no way an endorsement of The TERF Who Shall Not be named!)

Maybe at first glance you assumed that Joel Kim Booster was dressed up as Spider-Man. But as the Fire Island writer and star notes in his tweet, he’s actually Ben Reilly, a Peter Parker clone known as the Scarlet Spider.

Janelle Monáe looks like she stepped right out of director Luc Besson’s cult sci-fi classic The Fifth Element as intergalactic opera diva Plavalaguna. “I’m in my element,” the singer captioned her Instagram post.

Cheyenne Jackson’s Mandalorian costume doubled as a touching tribute to his friend and late co-star Leslie Jordan who died unexpectedly last week. “Last time I wore this my friend @thelesliejordan was strapped to my back,” Jackson wrote, referring to a Halloween episode of Call Me Kat in which Jordan dressed up as Baby Yoda.

Hayley Kiyoko got in on Scooby Gang member Velma’s big gay moment. The character was recently revealed to be a queer in a new animated Scooby-Doo film. But Kiyoko’s costume was also a clever call back to her appearance in several live-action Scooby-Doo movies as a child actor. Her Scooby-boo Becca Tilley completed the couple’s costume as Daphne.

Rebel Wilson delivered not one but two costumes over the weekend. First, she, girlfriend Ramona Agruma, and friends boxed themselves up in pink as Barbie dolls. Then, Wilson and Agruma made another appearance as the creepy twins from The Shining.

Queer as Folk’s Johnny Sibilly showed off a record-breaking—so far—three different costumes. His Instagram slideshow featured pics of Sibilly dressed as a construction worker, a dandy vampire, and a cheerleader. “Spooky Season Done,” he captioned the post, which seems like an understatement!

In the queer-adjacent category, we’ve got Lizzo absolutely killing it with her Marge Simpson costume.

And of course, there’s Madonna, looking creepy AF in a black bustier and a stitched-up face filter. But…what exactly is she supposed to be?