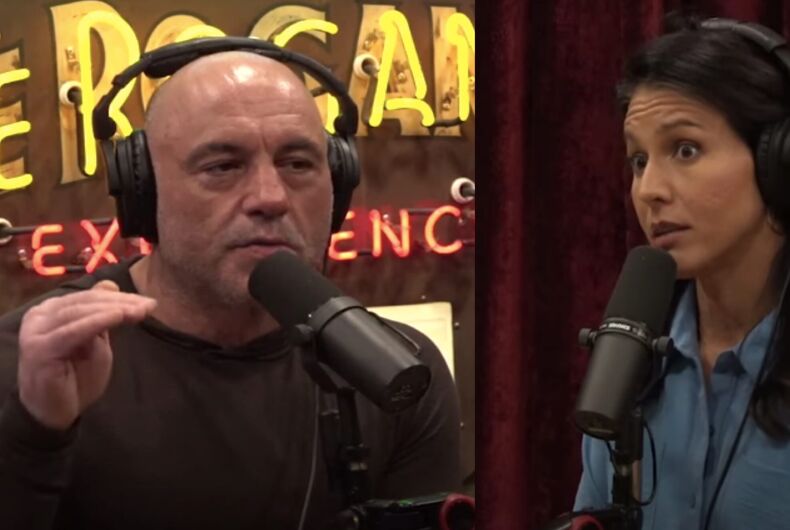 During his transphobic chat with conservative politician Tulsi Gabbard, right-leaning podcaster Joe Rogan repeated a far-right lie about student “furries” using litter boxes in public schools. There’s no proof that such a thing has ever occurred.

“My friend, his wife is a school teacher, and she works at a school that had to install a litter box in the girls’ room because there’s a girl who’s a furry, who identifies as an animal and her mother badgered the school until they agreed to put a litter box in one of the stalls,” Rogan claimed without telling where this allegedly occurred. “So this girl goes into the litter room or to the girl’s room and urinates or whatever — I don’t know if she poops in it, that’s pretty gross.”

“That’s the worst thing in the world about owning cats, you gotta clean that box of piss every day,” Rogan continued.  “Imagine how f**king crazy that is. You’re a human and you prefer a litter box? You want to piss into a pile of sand rather than use a bathroom, flush a toilet, wipe yourself, like a normal person. Like, you’re so crazy with what you think an animal is that not only have you said this, but you’ve conned the school into putting this f**king litter box in a girl’s room. That’s just bananas.”

Rogan’s claim was shared by Chaya Raichik, who goes by LibsofTikTok on social media.

Joe Rogan tells Tulsi Gabbard about a teacher he knows who said her school was forced to install a litter box for a student who identifies as a cat. pic.twitter.com/jqU4T1V9Nl

Various conservatives have repeated lies about schools recognizing furries as a gender identity, but fact-checkers and school districts have repeatedly debunked such stories as hoaxes. In reality, such stories are meant to bias people against transgender individuals and against transgender-inclusive school policies, since they mock the idea of living as one’s authentic self.

Numerous right-wingers and Republican candidates across the nation have repeated similar claims about student-furries, forcing school districts to debunk them as untrue.

Elsewhere in their conversation, Gabbard claimed that Democrats and trans supporters think “there’s no such thing as a woman.”

In short, no. Rogan doesn’t insistently, consistently, and persistently identify as a woman, so he is not a woman.

Rogan then said, “You know, there’s a chess game and the ultimate checkmate is: ‘What’s a woman?'” Rogan said that trans supporters often stumble when trying to define a woman while also stating that transgender men can get pregnant.

“That documentary is so good because Matt Walsh simply asked questions, and he does it deadpan,” Rogan said. “And it’s amazing watching these people just like twist reality into some weird f**king contortions.”

Walsh’s documentary is filled with misinformation and distortions including claims that gender-affirming surgeries are dangerous and experimental (they aren’t), that children can’t know if they’re transgender (they can), and that trans identities are a modern and Western invention (they’re not).

This means that three percent of the 0.62 percent of the U.S. adults who identify as transgender have permanently detransitioned. While that number accounts for 39,000 individuals nationwide, Rogan didn’t mention that many of these people detransition because of the transphobic harassment and violence they face for living as out trans people.

Second, gender-affirming surgeries aren’t “purely experimental.” They have been conducted for nearly a century.

Rogan didn’t mention who was finding these side effects. Medical professionals who work with trans youth say that puberty blockers have been used for decades on trans children and children with certain cancers with neither harmful nor permanent side effects.

Gabbard blasted the Biden administration for supporting transgender youth and claimed that many kids are coming forward to share the “long-standing symptoms and problems and illnesses” after having “irreversible surgeries.” She repeated far-right transphobic talking points by calling gender-affirming medical care a form of “child abuse.”

In reality, gender-affirming surgeries are only rarely performed on minors. Medical professionals often encourage parents of trans youth to let their kids continue exploring their gender. Puberty blockers give trans kids time to explore their identities before the permanent effects of puberty occur.

Gabbard and Rogan also connected trans rights with psychologists who believe pedophilia is a sexual orientation, part of the old libel that LGBTQ identities are linked with child sex abuse.

Rogan claimed that transgender ideology is being spread through schools and universities.

“This is a social contagion,” he said, also calling it a “mind virus,” using disease metaphors to vilify trans-acceptance. His claim have been repeated by far-right politicians and transphobes to harass educators, silence LGBTQ allies, and de-fund schools.

However, at least one study has shown that such claims are untrue since the number of trans-identified adolescents has actually decreased in recent years.

Gabbard and Rogan also discussed “biological males competing in women’s sports.” Despite fear-mongering that transgender girls are taking over girls’ school sports, the number of trans competitors remains very small. Fears about them, though, have led several states to ban trans kids from participating in school sports, denying them equal educational opportunities when it comes to athletics.

Gabbard then mentioned that she sponsored similar legislation during her time in the U.S. Congress. She recently left the Democratic party over claims that it was driven by “cowardly wokeness.” However, her views have been so consistently aligned with the transphobic Republican party that one gay lawmaker responded by asking, “Wait, Tulsi Gabbard was a Democrat?”