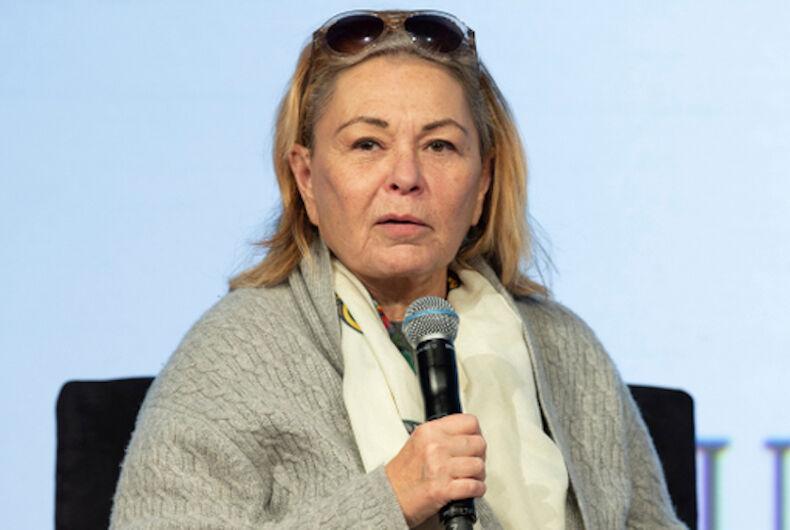 Disgraced comedian Rosanne Barr, who is Jewish, said that she appreciated recent antisemitic comments made by Ye, the rapper formerly known as Kanye West.

West wrote that he would go “death con 3 On JEWISH PEOPLE” for toying with him and blackballing anyone who opposes their agenda. He also repeated antisemitic tropes of Jewish people being money-oriented.

While speaking on the YouTube talk show channel Quite Frankly, Barr said, “[Leftists] rush to silence and deplatform and censor anyone who says anything that they feel they don’t approve of, and the goddamned thing about it is, they’re wrong. And they’re largely bigoted, racist, like – tokenist racism.”

“I kind of appreciated what Kanye said. They rush to silence and deplatform and censor anyone who says anything that feel they don’t approve of it. The God damn thing about it is they are wrong."pic.twitter.com/cdjPmWbXMm

Barr, a supporter of former President Donald Trump (who has also been accused of antisemitism) was herself kicked off of her sitcom The Conners in late 2018 after she published a racist tweet comparing former White House adviser Valerie Jarrett, who is Black, to an ape. Barr has also published antisemitic tweets accusing the Clinton political family of connections to Jewish billionaires and right-wing bogeyman George Soros.

In 2009, Barr posed for a photo in a Jewish satirical magazine dressed as Hitler pulling a tray of burnt gingerbread men out of an oven, a reference to the Nazi leader’s cremation of Jewish people in death camps during the Holocaust.

Roseanne Barr dressed up as Hitler and pretended to eat burnt cookies out of the oven.

1. This is beyond disgusting.
2. How the heck did she get a new show after this?
3. ABC should cancel her show. pic.twitter.com/nTC6zX3nHW

Around October 10, Ye posted a now-deleted Twitter message which said, “I’m going death con 3 On JEWISH PEOPLE … You guys have toyed with me and tried to blackball anyone whoever opposes your agenda.”

Via Instagram, Ye also shared a text exchange he had with fellow musician Sean “Puffy” Combs in which Ye wrote, “Ima use you as an example to show the Jewish people that old me to call me that no one can threaten or influence me. I told you this was war.”

“I prefer my kids knew Hanukkah than Kwanzaa,” Ye told Carlson. “At least it will come with some financial engineering.”

Since making his comments, Ye has been dropped by numerous companies that he had collaborations with including Adidas, Gap, Balenciaga, and Foot Locker. The Studio MRC, a film production group, said it would drop its documentary on the rapper. The Creative Artists Agency talent group also announced it would no longer represent him.

Ye’s Christian school for kids in California, Donda Academy, also abruptly closed for the remainder of the year, even though it reportedly plans to reopen in September 2023.