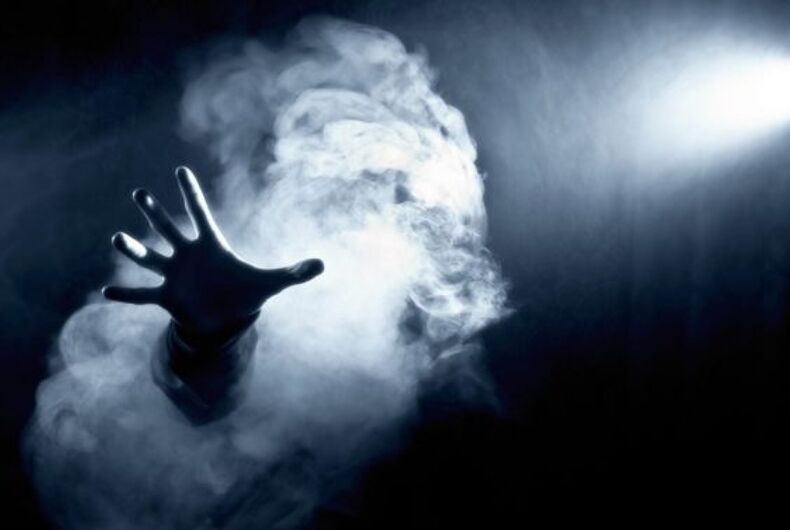 Whose ghost is more likely to pinch a bar patron’s booty: Truman Capote or Tennessee Williams? #SpookySeason is nigh on the balcony of the oldest—and possibly most haunted—gay bar in America*, and this casual debate is unfolding over the notoriously strong Bloody Maries of Cafe Lafitte in Exile, said to be the final drinking place of both literary legends.

Neither Capote nor Williams’ incorporeal forms have ever been documented playing grab-ass, for the record. That dubious spectral accomplishment belongs to “Mr. Bubbly,” a cheeky spirit who’s allegedly been pinching patrons for decades in New Orleans’ most famous gay safe space. With Halloween nearing and preparations for the spookiest party of the year underway, however, debating which writer could be Bubbly is fair game.

Despite being one of the most interesting pieces of living queer history in the USA, it’s easy to blow right past Cafe Lafitte’s in Exile. Perched on the corner of Bourbon and Dumaine streets, its concrete name placard blends into a well-shaded white facade. There’s usually a phalanx of bubbles parading from a machine on the tavern’s outdoor balcony and a modest folding sign near the front door identifying it as a “GAY BAR!” in rainbow chalk handwriting. Otherwise, little more than some hanging ferns draw the eye. This is rare on Bourbon Street, where businesses employ an orgy of neon, oversized banners, throbbing music, and hired barkers to lure hoards of dazed, boozed-up tourists indoors.

The understated presentation is a choice. As New Orleans’ oldest continuously operating gay bar, Cafe Lafitte’s founders and regulars were familiar with drawing the wrong kind of attention in the Deep South. “In Exile” nods to this, a permanent reminder of the anti-queer bigotry that yeeted Cafe Lafitte’s from its original location down the block.

Packed ghost tours thriving in New Orleans love to showcase the bar as a paranormal hotspot, claiming you can see celebratory specters waving from the balcony; encounter black heroes like Marie Laveau and Louis Armstrong inside; or even rub shoulders with the business’s namesake pirate, Jean Lafitte. These specific claims, while entertaining if you’re on vacation and/or edibles, are almost certainly bullshit. Nearly every business looking for tourism dollars in the French Quarter claims the spirits of Laveau, Armstrong, and Lafitte as visitors. (Never mind that Laveau, a devout Catholic and voodoo Mambo who practiced nursing during the plagues of the 1800s, would have had little interest in a white-owned, 20th-century gay bar.)

Claims that Capote and Williams still commune inside Cafe Lafitte’s are plausible since they were part of the venue’s community, but more on that in a moment. Ghosts are actually the least interesting part of the landmark’s history.

The O.G. Cafe Lafitte’s was opened in 1933 by Tommy Caplinger, Harold Bartell, and Mary Collins. Collins was known in the Bohemian French Quarter as an out lesbian, but with laws still mandating jail time for “sex perverts” and violent crimes against homosexuals seen as “a public service” in the eyes of the police, closeting was essential to survival. Caplinger, a legendarily generous straight man, knew Collins’ preferences and embraced her anyway, wisely recognizing queer folks have disposable income too. Cafe Lafitte’s thus made an effort to be as gay-friendly as possible within the limits of the time, and before long, the tavern was a nightlife hub. Major players like Ernest Hemingway, Capote, and Williams, Mexican artist Enrique Alfred, and journalists like Robert Rouark would become regulars, drinking alongside influential politicians like Earl Long. The triad of owners gave away tens of thousands of dollars in free drinks and emergency loans to its poorest and most vulnerable patrons.

Caplinger, Bartell, and Collins gave away so much income to their clientele that when the building’s owner sold the property in the early 1950s, they couldn’t afford to purchase it. Conservative John T. Moore became the new landlord and made it explicitly clear that while the bar was welcome, its gay clients were not.

Rather than obey Moore’s regressive mandate, the group did what queers have been doing since forever, i.e., subversively extending both middle-fingers and continuing to exist. A new lease was signed just a few doors down, and Cafe Lafitte’s slid from 941 Bourbon Street to 901, adding the “in Exile” to its name in recognition of why, exactly, the move happened. Sandbags and barbed wire were erected at the new location’s front door as deterrents for police raids and violent puritans. Patrons were instructed to enter through the back door for safety.

The old bar celebrated its new coming out with a raucous, invite-only masquerade in 1953. The category was, fittingly, “Exiles,” with attendees dressed as famous outcasts like Napoleon, Oscar Wilde, and the poet Dante. Open 24/7/365, they’ve remained an essential space for Louisiana’s gay drinkers ever since.

Today, the barbed wire and sandbags have been replaced with those ferns, and the front door is nearly always open. A perpetually dark interior encourages the ghost stories, though events like Drag Queen karaoke and a weekly disco night make it impossible to catch the whispers of the dead. The bar’s population swells to overflowing during any holiday involving costuming—think Mardi Gras, Pride, or Southern Decadence.

With the highest of gay holy days, Halloween, incoming, Cafe Lafitte’s is currently prepping for the biggest party of the fall. They’ll be hosting a “Booze and Boo’s” party after the annual New Orleans Halloween Parade, one of the best people-watching events (outside of Mardi Gras) anywhere in the country.

“If Tennessee Williams haunted a bar in the French Quarter, it would probably be either Lafitte’s in Exile or Carousel Bar,” he says. “He spent a lot of time at both…and frequented Lafitte’s in Exile when he lived on Dumaine Street. Many locals still have stories of their encounters with him in the 1970s. I like to think if he does haunt one of the drinking spots, it’s as a benevolent spirit, sharing in the spirit of inclusivity and celebrating the strange, the crazed, and the queer, which he called the fugitive kind.”

Cafe Lafitte’s bartenders are less poetic in their assessment.

“I don’t worry about the ghosts, baby,” one quips en route to deliver solo cups to two women wearing feather boas at 4:55 pm on a Wednesday. “It’s the living you gotta look out for.”

* Cafe Lafitte’s in Exile shares the “Oldest Gay Bay in America” moniker with the White Horse in Oakland, which also opened in 1933