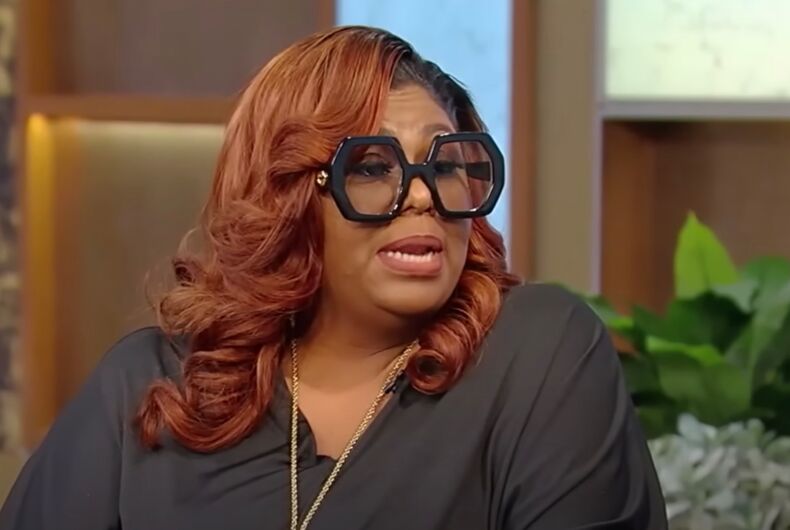 Hall was calling out a pattern of Burrell’s verbal missteps and noted her notorious homophobic sermon from 2016 at the Love & Liberty Fellowship Church in Houston, which derailed her career.

“I came to tell you about sin,” she said at the time, captured on video that went viral. “That sin nature, that perverted homosexual spirit, and the spirit of delusion and confusion, it has deceived many men and women. You as a man, you open your mouth and take a man’s penis in your face, you are perverted. You are a woman and will shake your face in another woman’s breast, you are perverted.”

The condemnation was universal. Ellen DeGeneres cancelled a planned performance by the singer with Pharrell for a duet from the Hidden Figures soundtrack. The movie’s co-star Janelle Monae eviscerated Burrell in a lengthy Instagram post:  “I want to slap a lot of people when I read and hear the shit that comes out their mouths!!!” Mo’Nique blasted her for cloaking her hate in Christianity, saying that “It’s almost laughable.”

The singer lost her radio show with Texas Southern University, and her own talk show pilot got pulled before it had a chance to go to series. Awards were rescinded.

Burrell was unbowed by the trip down memory lane, and added another line of defense to her original sin of homophobia.

“No one has reported that my friend Jamie Foxx felt the need to call Ellen and say, ‘You got this one wrong. She has been more to our community than what the world is willing to see, and we don’t think that the extreme of cancelling her from a show was a proper response compared to what she’s done for our community.’”

“No one has ever interviewed me about what it is I’m offended by, and why should it matter. A reaction from a community that says, ‘We’re extreme on love,’ didn’t respond in love, in thinking that I was being deliberate to hurt,” she said of the LGBTQ community and allies.

“Truth hurts. I was standing there preaching what I know is the truth.”

The “Holy Ghost” singer appeared on the show to clean up the controversy surrounding new comments she made this past July at Kingdom City Church, in Charlotte, NC, where she was invited to speak and sing.

In remarks to parishioners, Burrell sermonized, “Sometimes before we get friends we have to do an interview: How long you been broke? How many times have you changed your name on your light bill? How many of your bills are in your little cousin’s name? Do you live in a trailer home or a house. You understand. It’s not about status or material things. It’s just about choices.”

She went on to slam Covid vaccines, and implied that some of the congregants were less than attractive. “I haven’t chosen anyone to be ugly yet. God is good. God is great,” she said, adding, “Most of you have on hats covering most of that anyway. Here’s to you.”

Burrell danced around the controversy without providing an explicit apology.