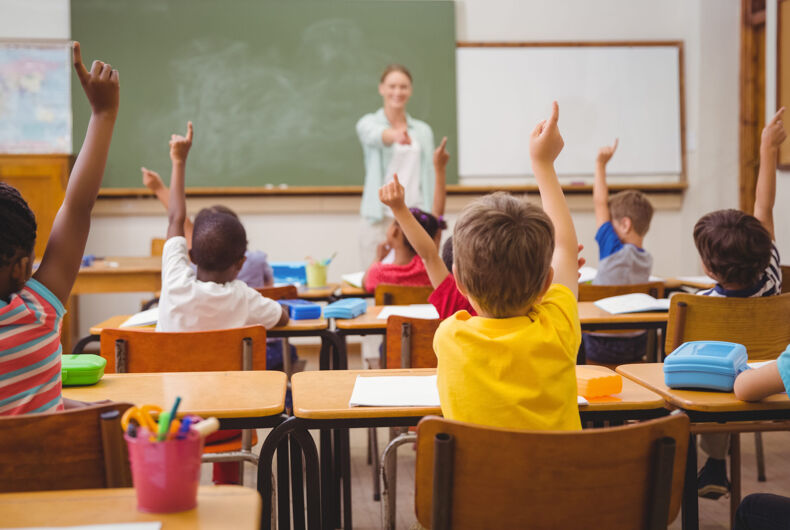 The Florida Board of Education has approved new rules that will make life harder for LGBTQ people and allies.

One of the rules requires schools to post on their websites and notify parents by mail if they allow students to use bathrooms and locker rooms in accordance with their gender identity rather than their sex assigned at birth.

In a statement, Equality Florida’s Senior Political Director Joe Saunders called this policy an “attempt to bully and intimidate school districts that are providing these accommodations.”

“The Board of Education’s facilities separation rule does not and cannot prevent transgender students from accessing facilities aligned with their gender identity — we know Federal law and the constitution protect these rights,” Saunders said.

“Florida school districts have been following federal law for more than a decade, establishing policies we know will continue to work long after this politically-motivated proposed rule…[Gov.] Ron DeSantis’ war on transgender Floridians must end. All students deserve access to school facilities that are inclusive and safe.”

But the new policy from the Board doesn’t direct schools not to follow the law. It just makes them have to jump through more hoops to do so and also potentially puts them in the crossfire of angry parents who won’t support inclusive policies.

The second new rule instituted by the Board of Education is in relation to the state’s Don’t Say Gay Law, which prevents teachers from mentioning LGBTQ people in elementary schools.

The rule takes the law a step further by directly punishing teachers who violate it. It says any K-3 teacher who is found to have taught their students about LGBTQ issues can have their licenses suspended or revoked.

According to Equality Florida, the rule contradicts a recent ruling on the Don’t Say Gay law that found violations are the responsibility of the school district and not individual teachers.

“The Board of Education’s move to target individual teachers’ jobs and licenses is another cruel attack from an administration that has spent months punching down at Florida’s LGBTQ youth and families,” Saunders said. “Qualified, effective teachers are fleeing the profession in Florida thanks to the constant politicization of their roles and discrediting of their characters by the DeSantis Administration.”

“Rather than help to clarify the Don’t Say LGBTQ laws scope, the Board of Education has taken this bigoted law to yet another extreme, threatening teachers if they dare to acknowledge LGBTQ families in the classroom. This escalation in deference to the far right agenda of the governor makes our schools less inclusive – and less safe.”